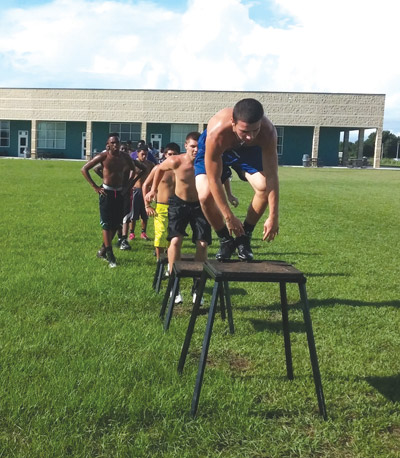 Lennard players are put through their paces by coaches during a recent practice session at the Ruskin school.
Kevin Brady photo

There’s a quiet confidence among the Lennard Longhorns this year.

Hope may spring eternal at the start of every season, but it’s hard work and talent that make the difference when it comes to football, according to Lennard High football coach Keith Chattin.

After a tough first two seasons when his team won only one game, Chattin enters his third season in charge with the feeling his young team has matured and is ready to challenge the top teams in the district this year.

“We always said years three through five would be the years we would make our transition,” Chattin said, “so we now finally have some athletes and kids who want to play and are committed so I think we are going to be pretty good this year,” he added between directing drills under a blistering morning sun at Lennard last week.

The Longhorns began this season on a winning note in May when they downed rivals East Bay 20-6 in a Spring Jam game. The victory bodes well for a team that went 1-9-0 last year and 0-10 in 2012. East Bay, a heated rival of the Longhorns, is also Lennard’s first game Aug. 29.

Chattin is hoping the team can earn between five to seven wins this season and challenge for a playoff spot for the first time in school history.

Sharing a district with perennial powerhouse teams like Armwood and Jefferson might faze some coaches. Not Chattin. 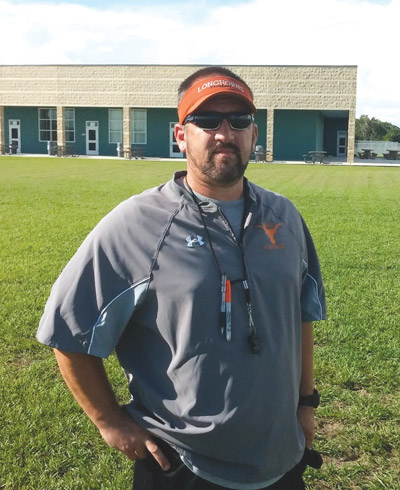 “I don’t mind it because I come from Georgia and we [were] used to playing the best of the best, and you have to be tested to have a good run in the playoffs. So I don’t mind the competition,” said Chattin, who coached at six high school programs in Georgia and Florida between 2003 and 2010 before joining the Longhorns.

“These guys just have figured out they can play with these other schools, and when they figure that out, we will be fine,” the coach added

Look for an explosive offense and a reinvigorated defense that will keep Lennard in games this year, Chattin said. “I think our defense is going to be the most improved aspect of the team.”

Chattin’s optimism is spreading among the players who, while hardly boastful — there’s nothing to boast about yet — are also sure they can challenge the big boys this year.

Longhorns’ running back Joshua Shelman, a senior, recently transferred to Lennard, but already he can see the team is making strides.

“I see a lot of improvement here,” said Shelman, who is also hoping for seven wins and a playoff berth this year.

Senior Drontae Johnson, Lennard’s quarterback, believes maturity and muscle is also playing a part in the team’s improvement this year.

“We have some guys on the team who are more mature now and also getting stronger, so I think our offense is going to be pretty good,” said Johnson, who also plays cornerback on defense.

“I think we have a lot of talent that came in, so I believe we will be pretty good this season,” said sophomore running back Jahoyn Bayley. Bayley didn’t hesitate when asked the game he is most looking forward to.

“That’s Armwood. I think we can take them this year,” Bayley said with a smile.