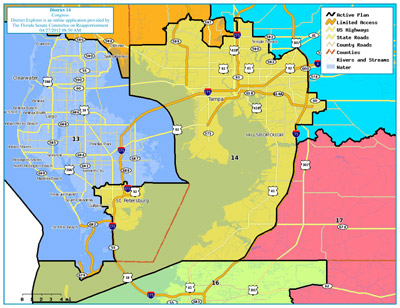 The Republican-controlled Florida Legislature did not break the law when drawing up boundaries for House District 14, according to a judge who also issued a scathing attack on the way other congressional boundaries were created.

The District 14 seat, currently held by Democrat Kathy Castor, comprises a large swath of South County including Apollo Beach, Riverview, Gibsonton and Ruskin. The city of Tampa, its suburbs and the southern tip of St. Petersburg are also part of District 14.

Congressional districts are redrawn every 10 years based on new census data.

A lawsuit filed by the League of Women Voters said District 14 violated Florida law because it did not use “existing political and geographic boundaries” and was drawn up to favor Republican candidates.

Second Circuit Judge Terry Lewis demurred, saying the district was drawn up by state officials who were not influenced by political pressures.

There was no evidence “that the decision to include Pinellas County in District 14 was the result of partisan mal-intent to benefit the Republican Party,” the judge wrote in his opinion. “The decision to have District 14 [include] Pinellas County was made early in the process by professional staff.” Staff, the judge said, who were “insulated from the political consultants. I cannot conclude, on partisan effect alone, that the decision to incorporate parts of southern St. Petersburg into District 14 was done with the intent to benefit the Republican Party”

While most voters take only a passing interest in redistricting, it’s a high-stakes game for political parties who try to have districts drawn in a manner that favors their voters. Historically, the districts are drawn up by the party in control of the state Legislature to protect its own political interests. The result is often bizarrely shaped districts that look “as if some abstract artist had been given free rein,” according to the judge.

In 2010, Florida voters passed two amendments, the Fair District Amendments, to the state Constitution, aimed at eliminating this political gerrymandering that, critics said, allowed politicians to pick their own voters.

The League of Women Voters lawsuit said several of the newly redrawn districts violate those amendments. The judge sided with the League in two districts, saying the redistricting violates the law in the 5th and 10th districts in Central Florida.

“To many it seems like Washington’s fears have been realized,” wrote Lewis. “Certain in the righteousness of their cause [the country’s opposing political parties] consider those in the opposing camp to not only be wrong but a threat to the very foundations of our country. They must win elections and remain in power because, to the partisans, their party’s interest is synonymous with the country’s interest. Winning is everything.”

“Republican political consultants or operatives did in fact conspire to manipulate and influence the redistricting process,” Lewis wrote. “They made a mockery of the Legislature’s proclaimed transparency and open process of redistricting by doing all of this in the shadow of that process, utilizing the access it gave them to the decision makers, but going to great lengths to conceal from the public their plan and their participation in it.”

State Republican leaders had mostly stayed mum on the decision. But Tuesday they said they would not appeal. Instead, they said they agreed to redraw the two districts ruled invalid.