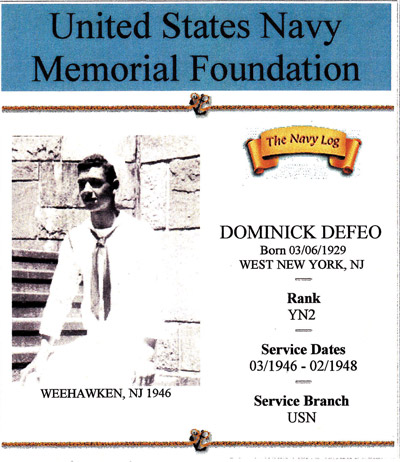 Dominick DeFeo joined the Navy and served from March 1946 to February 1948. Though the “shooting war was over,” he enlisted not only to serve his country, but for an opportunity to use the G.I. bill later, to better his education. He shipped out and served at Howard Air Force Base at the Panama Canal.

Dominick DeFeo was around 10 years old when World War II started. He lived in New Jersey and said he lived a life typical of a member of a middle-class-income family at the time. DeFeo’s mother and father both came from Italy. His grandfather had a fish store, his father sold vegetables. Like many parents, they wanted their children to get an education and strive to better their lives.

When DeFeo enlisted at 17 years and one day old, his parents were happy.

“They were glad that I was looking at my future,” DeFeo said. “I quit high school to get in the Navy. The shooting war was over, but they still had the G.I. Bill.”

And with that G.I. Bill, DeFeo could go to school after serving in the military.

The men in his family went to war. That was a fact of life, as he grew up to be a man. In those days, you were a man at 17 years old and eager to take hold of your life and make it count. DeFeo said he had one uncle serving in the Air Force and two other uncles who served in the Army in World War II. His older brother served in the Navy in that war. DeFeo said his brother met up with one of his uncles at the Battle of Okinawa in 1945. It was considered the largest amphibious assault in the Pacific Theater of World War II.

In English, the battle was called the “Typhoon of Steel” because of the ferocity of the fighting, the intensity of kamikaze suicide attacks from the Japanese and the number of Allied ships and armored vessels that attacked the island. The Japanese referred to the battle as the “Rain of Steel,” or “tetsu no ame.”

This battle resulted in the highest number of casualties in the Pacific Theater in World War II. According to the Japanese, there were 77,166 Japanese who either were killed or committed suicide. The Allied Forces say they suffered 14,009 deaths during that battle.

Like all Americans, DeFeo was aware of the battles of World War II and he enlisted because he knew he could be drafted soon. He reported for duty at Bainbridge, Md., on March 7, 1946. Because he could type, he said, he worked in the commander’s office. After six months, he began to get itchy and talked to his commander about a transfer.

“You know, I enlisted in the Navy to see the world,” DeFeo said.

DeFeo tried to get a transfer to Hawaii, but the Panama Canal was his assignment. He waited in Norfolk for a ship to take him there, but a childhood illness flared up while he waited for his ship. DeFeo said he traveled to the Panama Canal on a naval hospital ship as a patient. They operated on his arm, and he spent the rest of the voyage recovering from the operation.

DeFeo was assigned to Howard Air Force Base where he worked in an office from 7 a.m. to 3 p.m., which was considered a “tropical” schedule, not a naval schedule. The small squadron he was attached to wore shorts to work, and after work mostly stayed on the base where there were swimming pools and sports available to play.

“We had it made!” DeFeo says, looking back.

They also had opportunity to go into the interior and hunt. The Navy provided them with rifles. According to DeFeo, they were mostly looking for the “Panama” rabbit. It looked a lot like a kangaroo, he said.

To collect flight pay, he flew on PBMs, or medium-size sea planes. In the war, they had been commissioned to search out submarines. While DeFeo was flying, they were mainly used for air and sea rescues. On one occasion, DeFeo said the plane went down and they were stuck on one of the Galapagos Islands.

“It was a long three days,” DeFeo said, chuckling. “Tropical fish in a lagoon, and we were without a fishing pole. There was coral everywhere and you couldn’t even walk around.”

DeFeo says the time he spent in the military was defining. It gave him an opportunity to go to school. He came home and married a girl he had known from high school. DeFeo attended dentistry school and became a dental technician. Later, he became an insurance agent for Mutual of New York and said he became very successful.

“I made the top clubs and took three months off for vacation every year the last 15 years of my career,” DeFeo said. He and his wife had a boy and a girl. “I had a good life,” he said.

DeFeo says his uncle John Coppola and wife, Tina, became home­owners in Sun City Center early on. He was the 17th homeowner in the Kings Point neighborhood, according to DeFeo.

“He was younger than 55 years old, but he had cash!” DeFeo says. “He helped start the [Sun City Center] Emergency Squad.”

DeFeo attributes his own success to the time period.

“Anyone serving in World War II became successful,” DeFeo said, quiet for a minute — perhaps thinking back to a time when he was 17 years old and left home to serve his country. “You know, I think I am one of the youngest veterans of World War II.”

Empowered survivors of domestic violence step out, speak up at fashion show