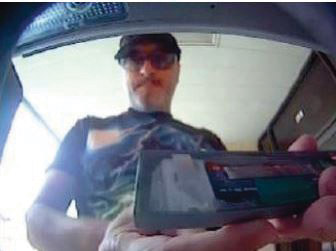 The suspect in the ATM skimming was caught on surveillance video installing the device that secretly reads cards.
Hillsborough County Sheriff’s Office photo

Detectives are warning anyone who uses an ATM to be careful after a man installed three skimming devices on area cash dispensers.

Evidence found at the scene indicated the suspect used green tape and white two-sided tape to attach the skimming equipment to the ATM card readers.

Skimmers work by fooling cardholders into believing they are using a real ATM machine when, in fact, the skimmer is reading the user’s card number and password. The hidden electronics steal the personal information stored on your card and record your PIN number so thieves can later use it to withdraw money.

At the Tampa location, a white male is seen on surveillance video installing a long, thin silver box with electronic equipment inside, according to the Hillsborough County Sheriff’s Office. The silver box was left by the suspect, attached to the front underside of the ATM, above the keypad area. It contained electronics and a camera to record the customers’ fingers as they entered their personal identification number on the keypad.

Anyone with any information about the suspect is asked to call the Hillsborough County Sheriff’s Office at 247-8200. Anyone with any information regarding the identity and whereabouts of this suspect and who wants to be eligible for a cash reward is asked to call Crime Stoppers at 1-800-873-TIPS (8477), report anonymously online at www.crimestopperstb.com or text “CSTB plus your tip” to C-R-I-M-E-S (274637).

How to spot ATM skimmers

1. Check for Cameras
Look for cameras anywhere that would have a view of the keypad. These cameras are installed by scammers so they can tape you entering your PIN. Covering the keypad with your other hand while you enter your PIN will help defeat most cameras.
2. Pull on the Card Slot
The actual skimming device is usually placed directly over an ATM’s actual card slot, but since scammers don’t often have hours to properly install skimmers, the illegal device may come off in your hands with just a few gentle tugs.
3. Wiggle the Keypad
Since placing your hand over the keypad will defeat most PIN-stealing cameras, some scammers are placing their own keypads over the ATMs as a way of recording users’ PINs. So give that keypad a wiggle or a jiggle (your choice) and if it feels loose, find another ATM.