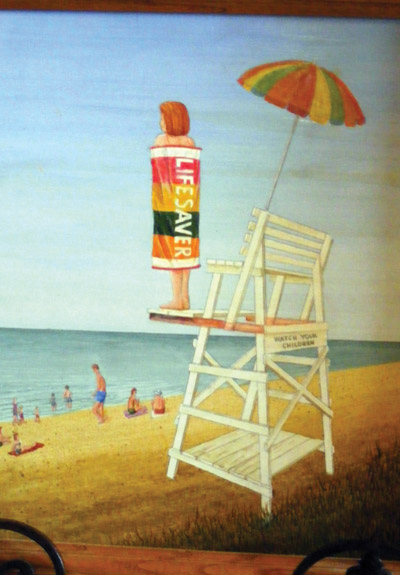 Many of Ted Daubresse’s paintings, such as this one, were done with humor.

About 50 close friends, fellow artists and family gathered July 9 at the Payant Financial Center in Sun City Center to celebrate the life of Ted Daubresse.

Ted died on Father’s Day, June 15, and the date of his memorial was chosen because it would have been his 88th birthday.

Ted was a single dad long before single dads were the norm.

“He raised me and my brother Craig,” said Gary Daubresse. There were two other children by Ted’s first wife but they were raised separately, Gary said. When asked about memories of the times he, his brother and dad had had together, Gary answered simply that there were just too many good things to mention. “We did a lot of things together,” he said. “He was a good father.”

“Ted loved social gatherings,” said Ted’s friend Tom Payant. “When we heard of his passing, we knew a celebration would be what he would want.”

So the Payants planned the party, complete with a cake with a model of the Payant Financial Center building on top and a huge scrapbook of photographs taken by Ted when their building was going up.

“Ted was a dynamo,” said Robyn Payant. “He was a friend, a retired architect. We were seeing clients in Sun City Center all the time, and our office was in Tampa. We found out about this corner with the bank building that was no longer occupied, and Ted said, ‘Great! You can build 8,000 square feet on that property.’ Well, I told him we couldn’t possibly use 8,000 square feet of space for an office, but he said right away, ‘Of course you can. You should have tenants.’ And that’s how the idea for this building was born.” 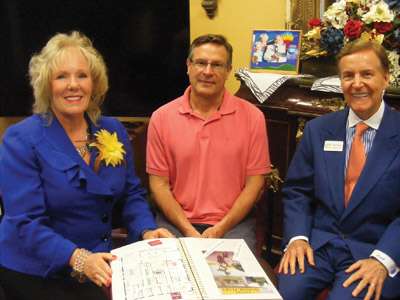 Robyn and Tom Payant of Sun City Center show Gary Daubresse, center, a photo album of each step of the construction of their building, the Payant Financial Center.

Robyn said Ted would get an idea and call at odd times of day, even late at night.

“He was so exacting,” Tom Payant said. “He had a friend, Bill Badtke, who was a retired contractor who also lived in Kings Point. Ted was an idea man, and Bill is a get-your-hands-dirty-get-down-and-do-it guy. They were a dynamic team.”

With the old building torn down, the Payants began a new building. Each step of the way, Ted took photographs. Concrete pouring. Studs going up. Heavy equipment and workmen everywhere. The scrapbook shows the work, and the plaque at the front door dedicating the building to Ted that was unveiled at the Grand Opening Dec. 1, 2000, shows the Payants’ gratitude.

But Ted wasn’t just a fine architect, he was also an artist, said son Gary. “Dad painted some in high school and college, but never during his career. He took it back up after retirement.”

President of the Kings Point Art Club, Ted’s work reflects both beauty and humor. He also became interested in miniatures, for which he had to use very tiny brushes.

When the family takes what they want for keepsakes, the rest of Ted’s many, many paintings will be sold by the Art Club and the proceeds will be used for scholarships for aspiring artists, Robyn Payant said.

“His personality was quiet, but he was very gregarious once you got to know him,” said Tom Payant.

“He would have wanted to see the money go to scholarships,” Robyn added.
Gary agreed. 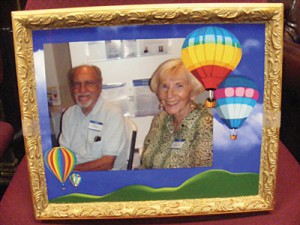 Ted Daubresse and his second wife Julie lived in Kings Point for more than 25 years.

Ted’s death came only three months after the death of his wife Julie.

Not the mother of his four children, Julie was his wife for 27 years, most of which they spent together in Kings Point, Gary said. His first wife’s name, the mother of Ted’s children, was Juanita. 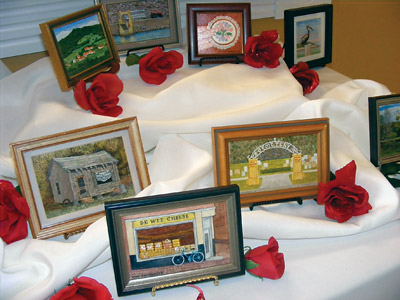