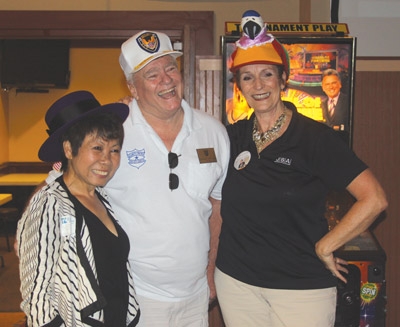 Candidates for the position of Honorary Mayor of Sun City Center are beginning their fundraising efforts. Pictured are Suzie Vong, Bob Powers and Rosie Korfant.

The first-ever Honorary Mayor’s Race of the Sun City Center Area Chamber of Commerce has kicked off, and three candidates have stepped up to the task.

The candidates — Rosie Korfant, Suzie Vong and Bob Powers —  were announced at a gathering at The Alley at SouthShore two weeks ago.

The winner of the race will be determined by the amount of money each candidate raises now through Aug. 15 by way of fundraisers and donations. Each dollar received represents one vote, so supporters are asked to vote early and often.

Money raised will be split evenly between the candidates’ charities and the Chamber. All parties will claim victory in this election.

Rosie Korfant chose the Good Samaritan Mission in Wimauma as her beneficiary. The mission enhances the quality of life of farmworkers and others living in poverty. Rosie is an active Chamber board member, ambassador facilitator and activities coordinator at JSA Medical Group, which provides free activities for patients and the community at large.

Suzie Vong is owner of The World of Suzie Vong Hair Salon. Her charities are the American Business Women’s Association,  or ABWA, which provides scholarships to local seniors, and the Shriners Hospital for Children, via the Sun City Center Shriners Club. Suzie is  an active member of ABWA and a member of the SCC Chamber.

Bob Powers: Golf tournament and benefit walkPowers’ primary fundraiser is a golf tournament scheduled for Saturday, Aug. 9, at Freedom Plaza. He plans to have a local television celebrity and a golf pro in attendance. The tournament will have a shotgun start beginning at 8 a.m. Watch for more details as they develop. Powers is also planning fundraisers for his cause with Connie Lesko, chairwoman of the SouthShore-based Walk. He can be reached at 813-642-2020 or email him at sccsecuritychief@gmail.com for more details.

Suzie Vong: Jewelry party and 2 dinner/shows
Events planned so far for Suzie are a Parklane Jewelry sale and showing at her shop on July 24 from 10 a.m. to 2 p.m. She is also hosting two dinner/shows featuring entertainment by Ellen Kleinschmidt, president of the Performing Arts Club in Sun City Center. The first is Saturday, July 26, at 5:30 p.m. at Prince of Peace Catholic Church. The second will be Saturday, Aug. 2, also at 5:30 p.m., at St. Anne Catholic Church in Ruskin. The dinner/show events are $25 per ticket and must be purchased in advance. Space is limited.
To donate to Suzie’s campaign, or to purchase tickets, visit her shop at 3820 SCC Blvd., Ruskin, near The Home Depot. For more information, call 813-634-5552.

Rosie Korfant: Salsa and line dance parties; sock hop
Rosie has planned three events: a Salsa Dance Party on Thursday, July 31, and a Line Dance Party on Friday, Aug. 8, both at the SCC Chamber of Commerce Banquet Hall from 6 to 8 p.m.; and a “Sock Hop,” with entertainer Hal Jeffries on Thursday, Aug. 14, from 2 to 4 p.m. at JSA Medical Group Activity Center.

Tickets for each event are available at JSA Medical Group, SCC Chamber and Good Samaritan Mission. Tickets are $5 each with refreshments offered at a nominal cost at the events, and $4 each for the afternoon event.

Donations for Rosie’s campaign are being accepted at JSA Medical Group, 787 Cortaro Drive, Sun City Center, and at the Chamber office. For more information, visit her Facebook page at www.facebook.com/rosieformayorofscc, email her at r.korfant@jsahealthcare.com or call 813-419-5020.

Donation checks should be made payable to the Sun City Chamber of Commerce. Donations  are tax deductible.

The campaign will wrap up  Aug. 15. The candidate with the most money raised will be crowned “Mayor” at the Chamber’s monthly luncheon Aug. 21.