Observations: The Glory of Commerce 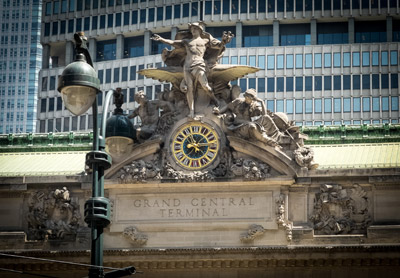 Art entitled The Glory of Commerce was commissioned to stand atop Grand Central Station, arguably the world’s most famous transportation terminal. The work, by sculptor Jules Coutan, was created in 1911 and features Hercules, Minerva and Mercury. Business has always been the business of America, fortunately with some long-lasting art (and cold beverages) thrown in. Mitch Traphagen Photo

Welcome to the United States of Corporateocracy! Tune in to certain media, websites and talk-show outlets, listen to certain neighbors, and you will become convinced that the Land of the Free and the Home of the Brave has become a land in which evil corporations own our elected officials, the Supreme Court and, well, even you.

Is it true? Perhaps so. Or perhaps not. Like most everything in this nation, it’s pretty much up to us — you know, that whole “We the People” thing.

Amazon is a huge corporation. Sure, it loses money but there is so incredibly much money involved it’s really hard for anyone to notice that. When billions upon billions of dollars are flowing inward, it’s pretty hard to notice the few hundred million here or there that are lost. It is a powerful corporation and increasingly it likes to flex its muscle, most recently and with great notoriety, against much smaller companies such as traditional book publishers. Amazon wants more of the pie and they have an awfully big fork ready to dig in.

But it would be really hard for many of us to make an effective argument that Amazon is evil, particularly with the opening of a fulfillment center in Ruskin. That is not a bad thing for this area. People have flocked to South Hillsborough over the past decade, and the jobs simply haven’t followed. Yet, if someone wants to live in our relatively quiet corner of paradise, and make money to buy the simple pleasures in life (such as food and a roof over their heads), a job is generally necessary. For years, the jobs for South County residents came with a lengthy commute.

And now with Amazon, hundreds upon hundreds of our neighbors will be able to afford the rent, clothes for the kids, food on the table and perhaps even to buy a home, all while enjoying a secure job located just down the road. And with Amazon here, more such opportunities are sure to follow. In fact, they already are following. It is a huge corporation and it is having a huge impact on real people — and some of that is simply the ability to afford a cold beer in your own backyard on a beautiful Florida weekend (assuming you aren’t on the weekend shift, that is).

Amazon tends to pay better than some big companies and does offer educational perks. But the big thing is the jobs. Where is the evil in that? Sure, if you are a book publisher on the wrong end of the negotiating table (or a former independent bookstore owner who now works in the fast food industry), you’ll see it, but less so if you are the guy or the woman enjoying a cold beverage on a day off with the knowledge that the VISA bill has been paid this month. Sometimes, perhaps often, the thought of hunger makes philosophical convictions a luxury that increasingly few can afford.

It has long been said that business is the business of America. At one time, perhaps, that at least suggested small business — and the idea that any one of us could take an idea born in our garage and build our own personal empire from it, through our ingenuity and the sweat of our brow. But these days it seems that the business of America has more to do with hedge funds and conglomerates run by men and women depicted as something slightly other than human clandestinely funneling millions into what their money has created to appear as a grass-roots-for-the-people-effort-that-is-really-something-that-robs-the-people (or at least the taxpayers). It doesn’t matter what side of the political aisle you are on — you can certainly find such things to fit your own personal paradigms by merely pointing to the other side.

Corporations aren’t human and they can’t be evil any more than trees can be. Yes, they can do things wrong. They can break the law. They can even hurt and rob We the People and our tax dollars. But evil? Not so much. Unless making money is evil, that is. Because while corporate charters lack hearts and souls, they do have a singular mission in life and that is to make money. In fact, they are required to do so. Perhaps at one time, not even all that long ago, large corporations had a social conscience of sorts, usually for PR purposes, but that is becoming a naive and quixotic notion of the past (wasn’t everything better in the past? No, it wasn’t). Today corporations do what they set out to do — make as much money as “humanly” possible. And if that means running along the razor-sharp edge of the law and even current morals and ethics to do it, then they will and without the slightest hesitation. Because they have no conscience. They aren’t people. They are machines that are pretty close to having the right to vote.

But at some point, a balance will tip. Nothing lasts forever. As long as we don’t nuke, overly pollute or destroy our environment, and thus ourselves, We the People, for good or bad, will outlast the Walmarts and Amazons in this world. Like all businesses before them, and, ironically, like people, they will eventually perish.

Only a few decades ago, US Steel was so powerful the CEO could demand an audience with the President of the United States. Just last month they were quietly and unceremoniously removed from the S&P 500, with which they were listed since its founding. A century ago no one would have believed that Sears would someday be struggling to survive. Four centuries ago, the Dutch East India Company was the wealthiest company the world had ever seen. They had merchant ships and warships, posts around the known world and an army of more than 10,000 soldiers. Their dividends paid in the range of 40 percent of investment. So what have you bought from them lately?

A corporation is derived from Latin words roughly meaning “a body of people.” Are corporations taking over our country and the world? Yeah, they probably are, just as they have in varying degrees and fortunes in the past. For now, anyway.

But they aren’t doing it as alien aggressors; they are doing it as a body of people, of us. With will and some fortitude, we can change things to return some equilibrium to the game of making money. But that change doesn’t mean blindly striking out, lacking in clarity, lacking in purpose, simply because a CEO makes four thousand times what you make and can sometimes grab a beer with a Congressman.

And anyone smart enough to make so many billions that losing a few hundred million here and there doesn’t really matter, is also smart enough to know that sucking the people dry of every last cent is a fool’s game. Someone has to be able to afford the cool electronic gizmos we are churning out. That means someone has to pay enough to allow for such things. We are reaching the point that decisions will have to be made between short-term profits and lingering corporate death. And eventually, those decisions will be made, although probably not always with the best outcomes. Regardless, it is inevitable.

Perhaps the best thing that large corporations can justifiably do is to invest in the business and people of America. By investing in communities, and that includes the environment, and in helping small businesses to prosper rather than simply snuffing them out as nuisances, they can help to assure their own survival by keeping a nice diverse level of business as the business of America. And in doing so, that will help to ensure millions of us that a beautiful day in America, or in Florida, can be spent secure in the knowledge of having a job that can pay the rent — and allow the luxury of buying the latest and greatest junk.

And what can you do? Enjoy every moment of your days off but while on the job do your best job — regardless of whether that is in a fulfillment center, an office or in your garage. Work hard, be diligent, and show that you are more than a drone with a wallet. Be good and do good. It matters.

We have problems in this nation and in the world. But as a body of people, we can and we will resolve them; and from the high road, high above the sometimes-lethal swing of the enormous pendulum of time, we will live to take on the next big challenges. That, too, is inevitable.