In South Hillsborough, crime falls but some become inexplicable 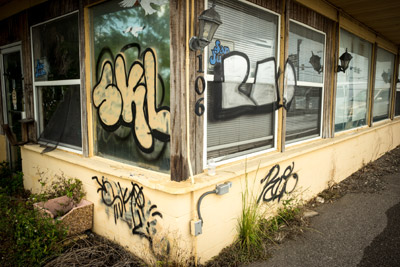 According to the HCSO, virtually all graffiti in South Hillsborough is not gang related but rather the work of taggers, people who do it for notoriety. Mitch Traphagen photo

Unincorporated Hillsborough County continues to grow by the day, yet despite the increasing population, the Hillsborough County Sheriff’s Office has kept a lid on crime. In fact, crime in virtually every category is falling. HCSO District IV, headquartered in Ruskin, patrols the largest, most expansive area in the county, protecting and serving hundreds of thousands of people, ranging from farmland to densely populated subdivisions to heavy industrial areas. It is no small task; nor is keeping crime low in a large and rapidly growing area. Part of the solution — and the success — of the HCSO involves technology, using virtually predictive techniques about where and when crime could occur. But most crime-fighting still involves good old-fashioned legwork.

Such is the case with graffiti.

Centuries before anyone had envisioned the idea of paint in spray cans, graffiti was scratched into columns at the Church of the Holy Scepter in the Old City of Jerusalem. Graffiti has existed through antiquity, most frequently making political statements, or even more common, statements of love and lost love. Some ancient graffiti has been deemed as advertising, often notably for services such as prostitution.

In a sense, some things never change but the nature of graffiti seems to be one that has indeed changed. Technology has provided an outlet for declarations of love and cries of love-lost anguish, as well as advertisements for the world’s oldest profession. Although embraced by some as an art form, and indeed some graffiti appears to be the work of gifted, if unwanted, artists, graffiti today is viewed as more of a warning.

“It’s a way for gangs to communicate and to mark their territory,” said Jim Blinck of Hillsborough County’s Anti-Graffiti Unit, a division of Code Enforcement. “If we can negate it as soon as possible, they’ll give up and go somewhere else. I don’t think it’s a growing problem, and I think we’ve done a good job in minimizing it. But it’s still out there.”

The Anti-Graffiti Unit works closely with the HCSO, using deputies as their eyes to find graffiti, to determine if the markings are  a gang-related threat and to relay that information so the graffiti can be immediately eliminated.

“We have a nice custom anti-graffiti vehicle that was purchased with a grant from the federal government,” Blinck said. “It has a high-pressure water blaster on it. We can wash it off without damaging a brick wall. If it’s on a painted surface, we have the ability to at least use a paint color to paint it out. If it’s done on the street, we can eliminate it on the street. It’s quite the vehicle.”

In all cases, graffiti that appears to be gang-related takes priority.

According to Major Ron Hartley, the commanding officer of HCSO District IV in Ruskin, graffiti found recently in South Hillsborough is not gang-related, but that doesn’t mean they aren’t going after those who do it. Quite the contrary.

“We have three taggers running around here now, and we’ll catch them,” Hartley said.

Taggers are people who vandalize public and private property. While they sometimes work in groups, they aren’t considered gangs. They often view their work as artistic and do it for the thrill and notoriety of it.

In South County, the HCSO has effectively put an end to gang-related activity.

“I haven’t seen anything in years,” Hartley said of local gang-related graffiti. “I used to, three or four years ago, but now most of our gangs are wannabe gangs. They aren’t really gangs. We haven’t had a lot of gang activity as far as graffiti goes in months and months.”

According to Hartley, local graffiti is primarily the work of taggers.

“In the last month or so we’ve had them running around,” he said. “They’ll try to paint up anything. They are not gang related. They think they are urban artists. They like to leave their names.”

And that could be the downfall when they are inevitably caught. With the HCSO and Anti-Graffiti Unit at work, technology kicks in and all of their activity is cataloged. As such, when they are caught, they face the very real possibility of being charged not only for current graffiti and vandalism but also for everything upon which they have left their names.

Graffiti is often considered a lifestyle crime — and as such, in a place such as South Hillsborough, it is taken seriously. And the consequences are likely to be serious as well.

Ironically, both the victims and those tasked with enforcing the laws against vandalism acknowledge that some of the taggers are talented artists. Their choice of canvas, however, ensures that any success from such talent will be impossible to realize. Once caught, they will simply be charged as criminals.

Tom Cairns, the property manager at Thriftway Plaza in Ruskin, has dealt with graffiti and with another, even more unique and inexplicable crime — the theft of storm grates. 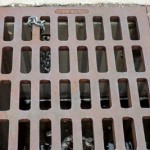 Given their size, a stolen storm grate represents an enormous danger to the public, as well as a high cost for the victims of the crime. Stealing a grate, and finding a way to get cash for the metal, offers an extremely low reward. Some area shopping centers have chained down storm grates to further remove the already low incentive for theft. Mitch Traphagen photo

As the price of various metals soars ever higher, some people have decided that heavy metal objects such as storm grates could be an easy source of cash. They couldn’t be more wrong.

Hillsborough County has strict and specific laws regarding the recycling for cash of suspicious items such as storm grates and even coils from air conditioning units. And even if a place is found, the return on an item such as a storm grate is low — often just $15 for a large piece of metal that usually requires more than one person to handle.

But the cost to the victims and the public is large.

“It cost me $700 to replace them,” Cairns said of storm grates that had been stolen from his shopping center.

A gaping hole in a parking lot is also a potential and extreme danger to the public. A car could be severely damaged, a person falling into one, unthinkable.

“I caught it in time,” Cairns said. “I reported it and I called a scrap yard and they said they won’t even take them.”

Some area shopping centers have added chains to the grates to make them less attractive, although for the effort required they would seem unattractive enough.

“For a while we were getting reports [of stolen storm grates] every other day,” Major Hartley said. “We’ve gone out and arrested a couple of people and it’s pretty much stopped now.”

According to Hartley, thieves hope to circumvent Hillsborough County scrap laws by breaking up the grates with sledgehammers, an effort that dramatically increases the amount of work involved in the crime. And again, all for a very low return.

“If these guys put the same amount of effort into legitimate work, they’d be millionaires,” Hartley said. “They are working harder than if they got legitimate jobs.”

And, like graffiti, keeping it in check goes back to technology. According to Hartley, despite the nearly inexplicable nature of storm grate theft, some people just want to steal things. Increasingly, the HCSO knows who those people are, making them easier to catch when they return to the streets after being caught once, twice or even a half-dozen times.

And while catching them requires old-fashioned footwork, it is the same for the victims, and potential victims. The last thing Cairns wants to see is someone damaging a vehicle or getting hurt from a missing storm grate. It matters little that the work involved in stealing more than a hundred pounds of metal and going to the effort to smash that metal into unrecognizable bits results in a net of a mere $15 for the thief. Cairns is worried about people.

“I drive by and double-check every single day,” he said.

To report graffiti on either public or private property, call the Anti-Graffiti Unit at 813-274-6600 and provide the address. According to HCSO Major Ron Hartley, crimes such as storm grate theft often occur in broad daylight with possible, albeit largely unsuspecting, witnesses. “If you truly think something is wrong, then it probably is, so call us,” he said. To report such crimes, call the HCSO at 813-247-8200.