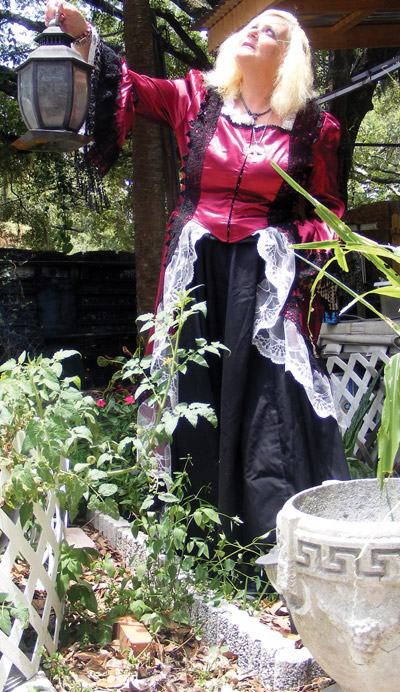 Shari Keller of Gibsonton says she died on hospital tables three times. Each time, she says, she came back with the knowledge she had business back on Earth. Her Fallen Angel CD that, she says, is climbing the charts, and her new CD, not yet released, are proof that decision was right, says Shari. Penny Fletcher photo

Some people have apparently died on operating tables, in car wrecks and from other trauma, and been brought back to life.

“When I was 18, I was hit by a car and I was dead for four minutes and 26 seconds,” Keller said. “When I woke up in the hospital, the only people I recognized were the priest from my Catholic school and the preacher from the Nazarene Church I had been attending. I didn’t know my parents, my friends or family, or the man I was engaged to in the Navy. I didn’t even know I’d been engaged.”

Then in 1991, as she was bending to pick up something on the floor in her bathroom, she came up hitting her head on a marble counter.

She says she felt very strange and dizzy but managed to drive herself to work.

Later she had to be taken to the hospital, where she was, once again, pronounced clinically dead. This time for three minutes.

The third time Shari “died” was also in 1991. She was injured in the line of duty while working for the Department of Homeland Security.

“That time I was dead for two minutes, 26 seconds,” she said. “After that, I kept feeling I shouldn’t be here. I should be dead. I became very depressed because I felt that God had told me I had unfinished business and I had to come back, but I didn’t want to and I’d argued with God. Now I was afraid I’d made Him angry.”

While healing from that incident, Shari said she became very depressed.

“Back when I got up every day and put on my uniform, badge and gun, I knew I had a purpose. I remember God saying I had a purpose, and now maybe I wasn’t fulfilling it. I was in pretty bad emotional shape.”

Gradually, though, she began to feel that working for Homeland Security had not been the purpose God intended.

Shari had been singing since she was seven, her mother having been a member of the Sweet Adelines group while Shari was growing up in Michigan.

Shari loved music, and now she started to write it. She had to wait until her disability money came in to start buying equipment, but gradually, with the help of her son and daughter, Shari got enough electronic equipment and a soundboard to begin recording her songs.

The result was her first CD, Fallen Angel, now on sale at Spotify, iUniverse and at the TateMusicGroup.com bookstore. Her songs are climbing the charts, she said.

“I feel I shouldn’t be here, I should already be with the angels,” Shari said. “That’s how I got the name for the album,” she said, describing herself as a devout Catholic who wears not only one cross but several. “I have angels all over my house.” Indeed, looking around you can easily see big ones, small ones, ceramic ones, china ones, grown ones, babies, cherubs and more.

She says she feels her music tells about making life a precious thing in the middle of a world of chaos.

“People need to realize that life is a gift,” she said at her kitchen table in rural Gibsonton on Sunday, June 29. “We need to inspire others, not worry about differences. There’s so much anger without each one of us adding to it.”

She says she finds beauty in the clouds, in flowers, the grass and all nature. “I find beauty in the woods out there,” she said, pointing across the road from her house.

“I’d like to tell people, if they have gifts, to use them,” she continued. “I’ll be 50 this year. Look at the idols people have today. They’re burned out at 30. They start at 16 and push; drugs, alcohol. The whole scene. I don’t need any of those things to be happy. I just want to sing and write music and find joy in life.

“It doesn’t matter if you’re middle age or a senior citizen. You can start appreciating life, and use your gifts, even if you’ve never used them before,” Shari said. “Maybe that’s my purpose — to inspire others. I want to help bring about peace somehow. That’s my ultimate goal.”

The CD has Shari’s own songs and remixes by others, including one from Italy and one from Cyprus.

“George Elinas, owner of Karmak Records in Cyprus, asked if he could remix Fallen Down with an orchestra, and I put it on the CD along with my original, which was a rock version. Now I just love his interpretation and I have an idea for a video.”

All the lyrics on the album were written by Shari. The music to Creation of Life was written by Andy DeBeake, a Belgian music producer, but the lyrics were by Shari, and they’re spoken, not sung.

Superstition, Just Chillin’, and Dreaming of You were completely her own creations, music, electronic sound effects, lyrics and vocals.

Meanwhile, she is busy at work on a second CD, this one titled Redemption.

She has no doubt when people hear her story they will understand where she gets her titles and lyrics.

A fallen angel is usually associated with someone — or something — negative. But Shari’s Fallen Angel means having come back to the Earth after having left it, finding her purpose and giving inspiration to others.

To check out or buy her music, visit Spotify, iUniverse or TateMusicGroup.com and click STORE.