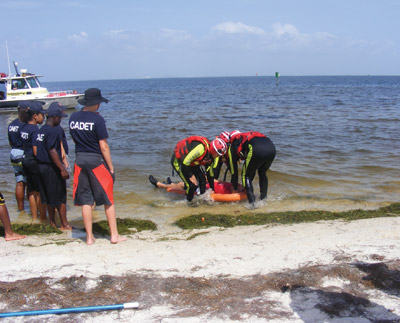 The “victim” is brought to shore on a special board, with care taken that his neck and back are not further damaged. Penny Fletcher photos

Members of the Children’s Board of Hillsborough County and the county’s Fire Rescue department are hoping a pilot program they’ve started will spread throughout the state.

“Drowning in Florida is 300 percent higher than the national average,” said Children’s Board Director of Operations Buddy Davis. “Back in March, we held a summit with Healthy Start, Eckerd and some other partners dedicated to children’s safety, along with the Juvenile Welfare Board, which is our counterpart in Pinellas [County].”

Davis said the summit focused on the three major causes of death in children under five: drowning, abusive head trauma and unsafe sleep.

“We thought of ways to get the word out,” he added, “and came up with the idea of making safety videos.”

At a cost of hundreds of thousands of dollars, with the hope that each partner will contribute $100,000, as is the Children’s Board, the group decided to concentrate first on drowning prevention. The board brought in the Hillsborough County Fire Rescue teams best equipped with the knowledge of promoting water safety and methods to be used in emergencies.

The idea of making a water safety video to be given to everyone who pulled a permit to build a swimming pool (in Hillsborough County) was passed, and within weeks, Rocky Trahan, founder and owner of TW Productions LLC and Safety Rock Foundation, was hired to do the job.

On June 25, two boats from Fire Rescue, manned by experienced rescue personnel and carrying Fire Rescue trainers, Davis, Trahan and his video team, joined with students taking part in Fire Rescue’s Summer Youth Academy and converged at Little Harbor Resort on Bahia Beach in Ruskin for a morning of training exercises and demonstrations.

First, Fire Rescue Training Officer Aaron Gross prepped the students with facts, then asked if any had ever had a hand in helping someone who was in distress in the water.

Several said they had.

“These were close calls where people were saved — why?” Gross asked. “Because people were watching. That’s what comes first. Watching.”

The students were further instructed to always remember to call for help before doing anything. Yelling if there are others around and getting attention by telling people to call 9-1-1 is the first thing you should do, he said.

“Don’t jump right in,” Gross told them. “The first thing someone in distress is going to do is grab you and pull you down.”

He advised remembering four things: Reach, throw, go, and if you do have to go into the water, not to go above chest level.

“Reach for someone. Throw a rope, one of those noodles if they’re long enough. There’s usually some sort of stick around a swimming pool. If you can’t reach the person, throw something they can hold on to to pull them in, or at least they can use to stay above the water until help comes.”

Gross explained that these students were not receiving lifeguard training. “That’s the job of the Red Cross or the YMCA. We’re here to teach you what to do in a drowning emergency,” he said.

Davis said if enough money could be raised, the group wouldn’t stop with giving videos to people pulling permits for new swimming pools.

“We’d like to reach out into the community, to HOAs [homeowner’s associations where there are community pools]  and other places around water,” he said.

Davis said if any group or individual wanted to know more or wanted to become involved, they could email him at bdavis@childrensboard.org. 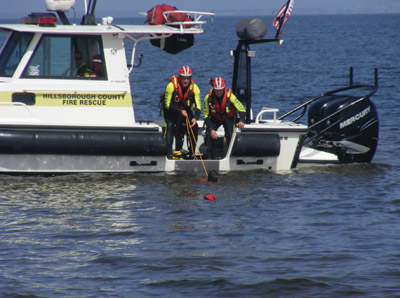 Todd Fortner, Rainey Angerosa, Steve Gonazlo and Matt Saracino man the boat that demonstrates the various tactics for lifesaving in the water. 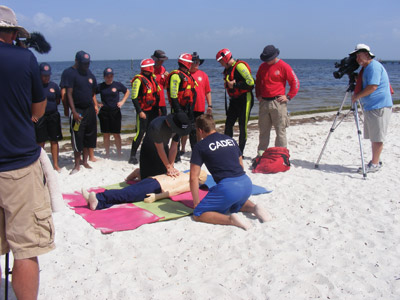