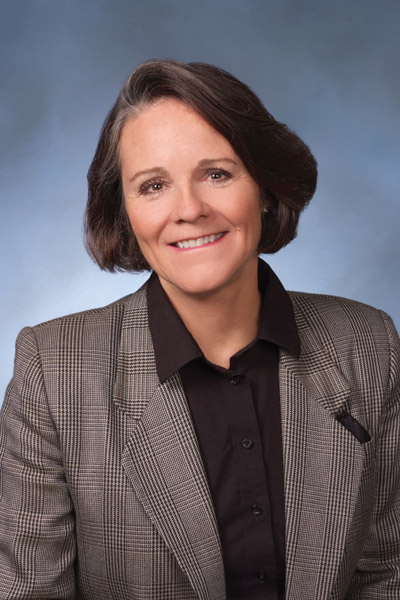 As much at home in a courtroom as the pool, award-winning attorney Sandra Bucha is now a member of the elite International Swimming Hall of Fame.

“It’s indescribable,” the Kings Point resident said. “I’ve looked up to so many of those who have previously been inducted, and admired and been inspired by their careers. And then to find out I would be joining them, I was just overwhelmed with humility.”

Bucha not only excelled in the pool, besting many male counterparts along the way, she also paved the way for equal treatment of young female athletes in the early 1970s.

The principal litigant in a successful lawsuit against the Illinois High School Association, the case went all the way to the state supreme court and resulted in the initiation of girls’ sports programs and state interscholastic championships for girls in the state. The judgment opened opportunities for thousands of girls to participate in swimming and other sports.

“Her career as a champion athlete and record as a conscientious citizen have been exemplary,” said Donna Lopiano, former president of the Women’s Sport Foundation.

Missing out on the 1972 U.S. Olympic swim team by six-tenths of a second in the 100-meter freestyle trials, a lesser athlete might have headed for the showers, permanently. Not Bucha.

“I was disappointed I missed by such a short period of time, but I have always felt blessed in my life,” Bucha said. “I missed the Olympics but I had done my best and the better women beat me in the trials.”

Not ready to leave the pool, the worldclass sprint swimmer read about a marathon swim meet and decided to give it a try.

“I found out there was a 10-mile lake swim in Chicago and thought I would see if I could do it,” Bucha said. She would finish second to Johan Schans, with both swimmers breaking the world record for the 10-mile swim.

So began a streak of nine races between 1973 and 1975 where Bucha took first place for women. In total, only three men finished ahead of her in those races, cementing her place as the top female marathon swimmer in the world.

Bucha said, “The challenge of marathon swimming for me was being able to complete the race. I was fortunate to be able to compete.” When she started beating most of the men, often coming in second, “I was pleasantly surprised,” she said.

Imagine Usain Bolt, the world record holder in the 100 meters, switching to marathons, and winning, and you have some sense of Bucha’s achievement.

“Marathon swimming is a very deliberate sport where you have to focus on conserving your energy,” Bucha said. “With sprint swimming, it’s over in no more than five minutes.” Marathon swimmers can be in the water for four to five hours.

For all her accolades, Bucha says her greatest satisfaction comes from knowing she helped young girls extend their careers in the pool.

“If there’s anything I am most proud of, it is that I, through the encouragement of my father, was able to file a lawsuit to try to get girls’ sports in Illinois,” said Bucha, who today practices law with her husband, John Kerscher, at their firm, Kerscher & Bucha in Apollo Beach. “It’s the most gratifying aspect of my swimming career.”

A short time after the lawsuit and spurred by the passage of Title 9 in 1972 — a federal law that prohibits discrimination on the basis of sex in any federally funded education program or activity — colleges and high schools opened the doors to girls’ sports, including swimming.

“When I started, most girls retired at 17, but today they can compete into their 20s,” Bucha said.

Watch Bucha’s induction into the International Swimming Hall of Fame on YouTube: www.ishof.org.

While attending Stanford University, Sandra Bucha went on a streak where she completed nine marathon swims and finished first in all nine races. She was recognized by the International Swimming Hall of Fame as an Honor Swimmer in its Class of 2014. 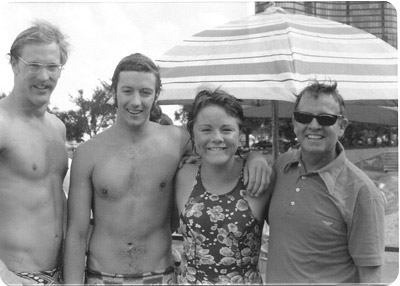 In this 1974 photo of the Trio From Hinsdale Central are John Kinsella, first place; Phil Dodson, third place; and Sandra Bucha, second place, with Coach Don Watson after the 10-mile Chicago Lake Swim. Photo courtesy of The Daily News of Open Water Swimming