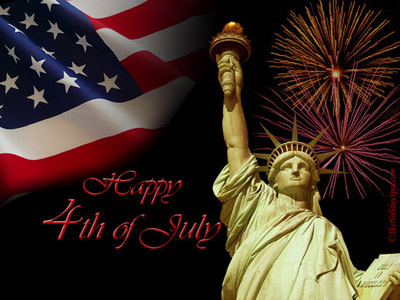 On July 4, 1776, the 13 colonies claimed their independence from the Kingdom of Great Britain, though the colonies actually legally separated themselves on July 2, when the delegates of the Second Continental Congress voted to approve a resolution of independence.

After the vote, the delegates turned to explaining this decision by writing the Declaration of Independence. It was prepared by the Committee of Five, with Thomas Jefferson of Virginia acting as its main author. The other four patriots on the committee were John Adams of Massachusetts, Roger Sherman of Connecticut, Benjamin Franklin of Pennsylvania and Robert Livingston of New York.

Observance of Independence Day began in 1777, with the firing of 13 gunshots as a salute. On Independence Day in 1778, Gen. George Washington marked July 4th with a double ration of rum for his soldiers and an artillery salute. Each year on July 4th, also known as Independence Day, Americans celebrate by coming together, with fireworks, parades, ceremonies, food and fellowship.

History has a human element, so the stories behind the events are sometimes little known. Following are some of the eccentric and less-known facts about the history surrounding our Independence Day.

• So that the Declaration of Independence could be published in the Pennsylvania Evening Post on the Fourth of July, 1776, America’s Second Continental Congress actually voted in the treaty that separated us from the British monarchy two days earlier — July 2, 1776. The 56 delegates actually signed the Declaration of Independence a full month later because it took that long to get all the delegates together, though on July 4th, one delegate signed the document: John Hancock.

• The average age of the signers of the Declaration of Independence was 45 years old. The oldest signer was Benjamin Franklin at age 70, and the youngest signer was Edward Rutledge, 26.

• The Liberty Bell was rung on July 8, 1776, to declare the proclamation of the Declaration of Independence.

• We all “know” how our American flag came to be, though that is also not completely known for sure. In folk legend, Betsy Ross is said to have designed red and white alternating stripes and a circle of 13 stars to be the first American flag.

• Did you ever consider that once America reached its 50th state the flag would have to be redesigned to be a 50-star flag? That honor goes to high-school student Robert Heft of Lancaster, Ohio, whose class was charged with making a national banner to include Hawaii and Alaska. His teacher gave him only a B-minus grade, so Heft sent his flag design to President Dwight Eisenhower for consideration, and hopefully a better grade would be his, if recognized. Eisenhower personally chose Heft’s design, and the new flag was officially adopted in 1960. And, yes, Heft’s teacher officially changed his grade to an A.

• How did the Fourth of July get chosen, you might ask? We all know that the day the Declaration of Independence was voted into law was July 2, 1776. And, then, it was published on July 4, 1776. However, some believe the Fourth of July remained the observance day of our independence because Thomas Jefferson and John Adams had something to do with it in a very personal way. They both died in the same year on the same day within five hours of each other in 1826 on July 4. Our fifth president, James Monroe, also died on July 4 — in 1831.

The Fourth of July was celebrated by Americans in 1777 in Philadelphia complete with a 13-shot cannon salute, a parade and fireworks. By 1870, Congress passed a bill making July 4 the official Independence Day, as well as passing into law the observance of other federal holidays like New Year’s Day and Christmas.

• Yep, hot dogs are the No. 1 food of choice for the Fourth of July. The creation of the hot dog is less certain. Legend has two versions. A cartoonist claimed at the turn of the 20th century that the New York Giants created the hot dog, calling them “red hots.” The cartoonist drew a cartoon of the event with a long bun, with a dachshund as the dog. But he couldn’t spell dachshund, so he used “hot dog” instead to describe his cartoon.

Another version of the story is that a frankfurter vendor in New Jersey nicknamed his sausages “hot dogs,” and became known by that term the rest of his life.

• Did you know that on July 4, 1776, John and Abigail Adams celebrated the day with a yummy bowl of turtle soup, salmon with egg sauce and green peas?

• Have you ever wondered what state could be the most patriotic state in the Union? According to the U.S. Census Bureau, the “State of Independence” is Pennsylvania. Why? Eleven cities or towns have “liberty” somewhere in their names, and 33 places use the word “union.”

• If it had been up to Benjamin Franklin, the Bald Eagle would not have been the symbol for America. “He is a bird of bad moral character,” Franklin wrote. “You may have seen him perched on some dead tree near the river, where too lazy to fish for himself, he watches the labor of the Fishing Hawk.” Franklin wanted our national symbol to be the turkey.

• The Liberty Bell has not been rung since 1846, due to the cracking in the bell. Every year, we mark the Fourth of July by symbolically tapping the 2,000-pound bell 13 times, so bells across America can start ringing in celebration.

• A side note: The Liberty Bell was made in England and the Statue of Liberty in France.

• “Yankee Doodle,” one of our patriotic songs, was originally sung by British military officers before the Revolution as a means to mock disorganized American patriots, who fought alongside them during the French and Indian wars.

So, dear readers, celebrate Independence Day this year safely and enjoy the comfort of family and friends. Rejoice that we have the freedom to celebrate our lives daily. As Ralph Waldo Emerson once said, “For what avail the plough or sail, or land or life, if freedom fail?”