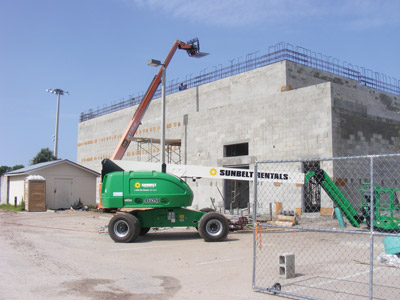 Construction continues on a new gymnasium at the Gardenville Recreation Center on Symmes Road in Gibsonton, a $1.64 million project slated to be completed by the end of this year.
Penny Fletcher photos

A $1.64 million county project of the Parks, Recreation and Conservation Department approved last year is well on the way to completion.

Workers think the new gymnasium at the Gardenville Recreation Center in Gibsonton should be finished by Dec. 31 this year, and a Grand Opening celebration is on tap for next January.

Construction started this January on a 10,000-square-foot gymnasium on Symmes Road that will house a new and improved weight and fitness room as well as a full basketball court and four half courts.

There will also be volleyball and pickleball there, said senior recreation specialist Dave Ramirez.

“Pickleball is the hottest thing right now,” Ramirez said. “We have 30 to 35 seniors active in the sport, and have team play on Friday nights for all ages. Mostly teens show up then,” he said.

Pickleball was relatively new to this area of the country until about 15 years ago when it began in Sun City Center. Since then, the sport has picked up dozens of loyal followers, and has become a part of the annual Senior Games. Now the younger generations are playing it, too.

Pickleball is a racket sport in which two to four players use solid paddles made of wood or composite materials to hit a perforated ball over a net. The sport combines features of badminton and tennis, with the layout of a badminton court and a net and rules similar to tennis.

It is one of the fastest-growing sports in North America, Ramirez said. “Once we get the new gym, we’re really going to promote it,” he said.

The Gardenville Center, which is home to many after-school sporting programs, is also a home for “active adult” play. No longer referred to as “senior citizens” by the staff there, the “active adult” group of “over 50s” numbers around 90 when all events and sports are counted.

The center has “camp days” when school is out and offers special themes for them. Right now, there is a Fishing Camp going on, but many others, including the arts and educational programs and camps, also are held there and in other buildings operated by the Hillsborough County Parks, Recreation and Conservation Department.

The Gibsonton renovation will allow for a Wi-Fi area with both indoor and outside seating, which will also promote both learning and fun, and the staff hopes intergenerational mixing and understanding will grow from that.

The old Gardenville School in front of the property was donated to Parks & Recreation by the school district and will be renovated in a separate project when the county budget allows. Plans for the renovations, to make the building look like it did in the early 1900s yet conform to current codes, are already drawn.

For more about the programs at the county’s recreation centers for all ages, visit www.hillsboroughcounty.org/index.aspx?nid=99. 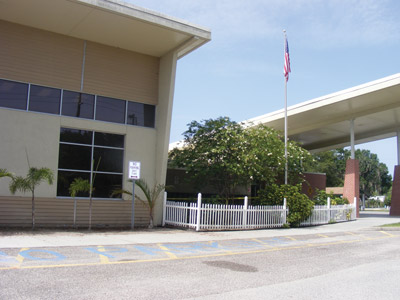 A portion of the completed area at Gardenville Recreation Center.