Observations: The devil I know? Hardly 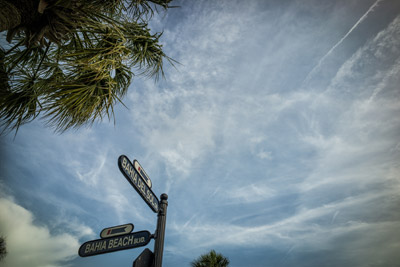 I was dreading a week on the boat of forced recovery from a heart procedure, but in the end, it did my heart — and my soul — good. And there are far worse places to recover.
Mitch Traphagen photo

It’s always an odd feeling arriving some place in the dark of night, and that included coming home to the boat in Florida. But on a recent night, after a late flight in from New York, it was spectacular. It was quiet, as it always is, and the stars shimmered, as they always do, and there was a wonderfully cool breeze blowing through the cockpit. I enjoyed that breeze, and the dark and quiet for a long time, letting it all lift my spirits. It felt good to be home.

The breeze and the stars did their best to wash away the stress of too many recent flights and the sadness of my Mom’s passing. “Just wait until you see what tomorrow brings,” they promised!

But I already knew what tomorrow would bring. Or, at least, I thought I did, and I wasn’t looking forward to it.

I was wheeled down the hospital hallway and soon saw the smiling face of Dr. Ranchhod Khant, the man who would, in a short time, save my life. That is not hyperbole; he actually did save my life. He did it through his skill, of course, but also through sheer dedication and perseverance. I have never encountered a group of people more competent, compassionate and caring than Dr. Khant and the entire surgical and nursing staff at Brandon Regional Hospital. Despite what I’m sure is an endless line of guys like me being wheeled in for stents and other heart “procedures” (it’s not surgery — I’m still only in my 50s), they made me feel as though I was their only patient — an amazing feat considering the stress of their jobs and the sheer number of patients they undoubtedly see every single day.

Technically I could say that Dr. Khant, who is with Bay Area Cardiology in Sun City Center, still makes old-fashioned house calls. No, he didn’t drop by the boat with a black medical bag, but he did call a number of times. He was concerned, and it turned out he was right to be. He said he could recommend cardiologists in the New York area so I could get it done right away. But I wanted the procedure to be done by him. I wanted it done in Brandon. Perhaps you could say it was like the idiom, “better the devil I knew,” but that would hardly describe the situation. Quite the opposite, in fact.

How can anyone adequately thank someone for saving their life? There are no words. Yes, of course, he got paid for his work, but what he does and how he approaches his calling — that of saving people’s lives — is something I am confident he does not measure in dollars. I certainly hope he is paid extremely well, but I’m sure the cost of his education and insurance are staggering. He does delicate work on a very sensitive and rather important part of the body, and ours is a litigious society. He could be nearly godlike and still someone would try to blame him should something go wrong — even in cases beyond hope and those only in the hands of God. That is unfortunate, to say the least.

I knew going in that if something went wrong, any fault wouldn’t be with him, or a surgical assistant or a nurse. It would have been my fault for waiting too long, or for not properly caring for myself. Or because life and nature is just sometimes perverted that way and we have to take most things on faith. At least I feel that I should.

Apparently, however, the good doctor’s skill and God’s Will ensured that I would emerge feeling better than ever — particularly so with being a little stoned from the happy drug they gave me during the procedure.

I wasn’t able to get out much, but friends were omnipresent, as was my wife through the phone and texts (the dogs, perhaps, thankfully, haven’t quite figured out how to open the cupboards and the doors yet to let themselves out, so I talked a very reluctant Michelle into staying with them). I spent the week watching life in the smaller universe of the marina with people enjoying the water and the sunshine and tearing back into the marina in little boats just ahead of storms that appeared so quickly. I saw squalls and sunsets that I wished I could grab onto and hold forever, but will only remain in my memories. Quietly, unobtrusively, I saw children playing on the beach, couples of all ages holding hands, and tourists and locals mixing up in conversation over drinks at the bar. I wasn’t there as a reporter, I was just there to revel in it, to savor every moment of the humanity that was before me. It was beautiful. It was good for the heart.

The devil I know? Hardly. It’s the angels that matter. The angels are right here among us. They are in the hospitals, the clinics, the Sheriff’s Office, the fire stations and in the house (or the boat) next door. Perhaps even on a barstool next to you. It felt good to be home … better than ever, actually.

I left Florida in the cool darkness of the early hours and returned home, my other home in the nation’s largest metropolitan area, to discover some landscaping in a cove of trees and a small table and chair Michelle had set up in our backyard as a writer’s area — I am typing these words from there right now. I’m surrounded by a lush green peace and a cool breeze, wonderfully isolated from the millions of people and infinite possibilities that exist just outside our front door. I’m looking forward to being back in Florida soon, but right now I’m really happy to be here. To my wife, to my friends, to those of you who emailed and to Dr. Khant (and everyone at Brandon Hospital): Thank you for making that possible. You are the angels I know.