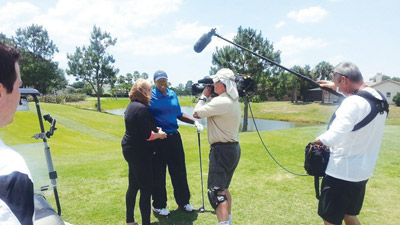 From left, ESPN reporter Shelley Smith interviews Ilee Coleman, who wrote True Confessions of a Golf Addict. It will be part of a documentary on ‘Outside the Lines’ to be televised on ESPN at 9 a.m. Sunday morning, July 13.

Former Beatles musician and songwriter John Lennon said that life happens to you while you’re busy making other plans.

Coleman wrote a book. Not an unusual feat in this day and age of self-publishing, but when he received a tweet from an ESPN producer, it gave him pause.

In fact, Coleman said he thought it was a joke, or a prank. And then, ESPN reporter Shelley Smith called and asked him if he might be interested in being part of a documentary, which would be filmed in May. Smith said it was his book, THE BOGEYMAN: Confessions of a Golf Addict, that had captured their interest.

Coleman had placed it at a few golf clubs, and there was also an e-edition.

“We love the characters,” Smith said to Coleman about the book. “It is hilarious.”

“It was surreal,” Coleman said. “It was a little mind-boggling. How did they pick my book?”

The path leading to writing this first book was circuitous.

Coleman attended Mercy College in Dobbs Ferry, N.Y., on a basketball scholarship. He said he is the only player at the school still among the top four players in every category.

While attending college, he had an English class he acknowledged he didn’t like. In fact, he felt incapable in the class. Midterm, Coleman said he had to finish the first part of a story as part of the assignment. The night before it was due, in the twelfth hour, he began writing. He told himself that at least the assignment would be done on time.

In class later, his teacher handed all the papers back to the students, except for his. He began worrying when his teacher approached him.

“Did you write this?” she asked him, holding out his paper that had an A+ grade on it. He said he had written it. “I want you to read it in front of the class.”

Coleman said he couldn’t read it in front of the class, so his teacher had someone else read it. Afterward, other students could not believe he wrote the story.

“I never considered myself a writer,” Coleman said. “I would just write and go to other places. It was a slow awareness that I might have a talent.”

He chose the game of golf to tell his story for the book. For instance, in business, playing golf is a conduit, an icebreaker in business relationships.

“Those four hours you are entrenched in each other,” Coleman said. “There are no distractions.”

Coleman’s day job? Private contractor. He says he is the middle man between insurance companies and healthcare providers. He spends time on golf courses as part of his professional life. This little book helped him address his own life, though it is a work of fiction. Here is a brief excerpt:

“We all gathered around Marcus’ shot. He was lying on the left side of the fairway just into the bend. With roughly 285 yards remaining, we started to strategize on how to score a birdie. Our plan was to hit the shots inside 100 yards and then a third shot onto the green close to the pin. Marcus pulled out his trusty 6 iron, which we nicknamed “Ole Reliable.”  He hit a shot about 200 yards, but it went right and into the woods. Steve flubbed his shot by picking his head up too fast and his shot was straight but only went about 50 yards. Because of the narrow fairway and only one ball remaining, I decided to drop my ball up ahead where Steve flubbed his so that if I miss-hit, I would be able to retrieve it.

On our way up to Steve’s ball Marcus drove over a bump and the back tires kicked up some debris. Donnie yelled for us to stop. As we came to a halt we noticed a ball lying smack in the middle of the fairway. Could this be…? Nah, it couldn’t be. A closer look revealed a familiar red dot on the back and when I picked it up it read ‘Bridgestone’! ‘This IS my ball’! Somehow the golf gods must have maneuvered my ball through the trees and placed it into the bend of the manicured fairway. With the new-found evidence we made an executive decision to hit again from the location of my ball. Since I hit the best drive, I felt I had earned the honors. With the excitement of hitting such a marvelous drive pounding through the fibers of my Polo shirt, I felt certain that I could hit another shot to get us close to the green. My confidence was swelling and in my mind, I was getting the hang of this golf thing. Who knows, I could be a natural and pick it up very quickly. If I put my mind to it, I could have this mastered in a few days.

I grabbed my 3 wood and eyed the wide green. Sitting about 250 yards from the pin our strategy was to hit a shot inside of 50 yards or reach the pin, if possible. I bent my knees, kept my head down with eyes focused on my ball. I took the club back behind my head and turned my whole body so that I could get more distance on impact. I brought the club downward from behind my head with enormous speed and strength….PANG! I made connection with the back of the ball then picked my head up to see it in its beautiful flight through the aqua blue sky. As I was searching the clouds for my ball, I caught a glimpse of a black and yellow flying object. For a moment, it startled me, as I thought I had witnessed a UFO sighting, but then realized that I’d hit the ground before impacting the ball, snapping the club head from its shaft and propelling it further than the ball …”

He wrote the book after playing a golf game with his friends one day. He wrote it over a period of two days and then showed it to his friends. They thought it was funny and liked it. It inspired him.

Now that he has written his first book, he confesses to working on another book.

It is loosely based on his experiences with the “Fresh Air Fund” organization in New York City. A not-for-profit, the Fresh Air Fund is a summer program that allows children a way to experience another lifestyle when they live with another family for the summer.

“It is the story of a young man who got introduced to a different family lifestyle,” Coleman said. “It is a guy that lives in two different worlds.”

Watch Ilee Coleman on an “Outside the Lines” documentary to be aired on ESPN at 9 a.m., Sunday morning, July 13. The documentary shows people whose lives have been changed by sports in some way. His book is available online at www.amazon.com and www.barnesandnoble.com.