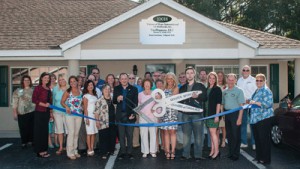 Lorianne De Loreto of Visions of Hope International hosted a combined Greater Riverview and SouthShore chambers of commerce ribbon cutting May 21 when she opened her office at 10018 Park Ave., Riverview, in the Park Place Plaza on Gibsonton Drive between I-75 and U.S. 301.
Huth & Booth Photo

Escaping an abusive husband with her three children, now all in their teens, all she knew then was that she’d had enough and was headed for her best friend’s house.

“People can help, but they really can’t understand unless they’ve been in a similar situation,” she said. That’s why she’s connecting formerly abused women in person and on the Internet.

But donors and sponsors,0 mentors and other help are needed for her new charity, Visions of Hope International, as soon as possible. 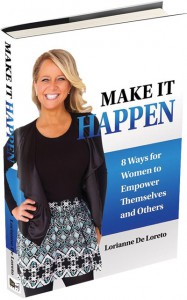 Operating on her own money from her home, De Loreto began writing a book, Make It Happen, which will be released in September, and starting a campaign called “Breaking Free: Silent No More,” along with her new charity, Visions of Hope International.

A freelance journalist, De Loreto wrote a story about Bryan Thatcher, who had earned the title of Business Man of the Year in Riverview a few years back, and eventually she shared her plans for Visions of Hope with him.

Thatcher, owner of Park Place Plaza on Gibsonton Drive between I-75 and U.S. 301, donated an office and seed money for the project that enabled her to open an office May 21 with the fanfare of a ribbon cutting by the Riverview Chamber of Commerce.

“It was a great event, and I think it’s a very worthwhile project,” said that chamber’s executive director, Tanya Doran.

The office is located at 10018 Park Place Ave., and its projects may be viewed on line at www.vhinternational.org.

De Loreto tells her story in an online video at that site, and also has lists of emergency numbers that abused women and those in other emergency situations may call.

But she makes it very clear she’s not operating a shelter.

“My programs are for women who have already taken first steps,” she said. “They’ve moved out of the abuse and often have already left a shelter. But it takes many months, even years, to heal. Some feel like they’re not worth anything anymore. Many have no self-esteem.”

It’s these things she talks about most, along with recognizing the signs of a cycle of abuse and spreading the word on what to do if you are in that cycle.

She is quick to share the topic of the first chapter of her new book. The chapter is titled “The Jewel Within You,” and reinforces the thought that everyone has good inside and deserves to be treated well by themselves and others.

Anyone who thinks they have something to share — whether it’s a hand up for a job, a donated car, mentoring skills or funds — is welcome.

De Loreto’s first community event will be a Red Carpet Fashion Show and dinner, planned for Friday, July 11, beginning at 6:30 p.m., hosted by Club Renaissance, 2121 South Pebble Beach Blvd., in Sun City Center.
Every woman modeling in the fashion show is a survivor of domestic abuse, she said.

Cyndi Edwards from NBC’s Daytime will be Mistress of Ceremonies and music will be provided by New Directions Orchestra. 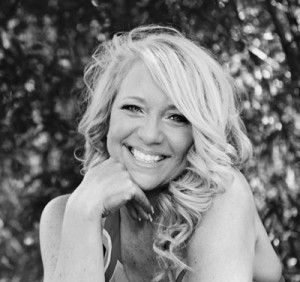 Lorianne De Loreto opened an office for her charity Visions of Hope International on May 21 and plans her first community event in July to help women who have left an abusive situation. The event will be a Red Carpet Fashion Show and dinner. All models in the show will be survivors of abuse.

“It will be a real champagne event,” De Loreto said. “Everyone will be greeted with a glass of champagne, and dinner choices will be chicken, filet mignon or a vegetarian meal.”

The proceeds will go to Project Restoration, which gives specific help to women with needs that fall beyond the scope of regular assistance, she said.

For example, one young mother, Franki Bernier, is currently in danger of losing both her housing and her job because she has no transportation.
Because her situation is so grave, Franki will be the first to benefit from the event.

“She had 300,000 miles on her car, and a head gasket cracked and that was the end of it. She also needs dental work, a cell phone and a computer,” De Loreto said.

This is just one example of some of the tangible things Visions of Hope plans to provide.

“Twice a year we will take special requests, like a car, transportation, glasses and dental work,” she said.

But Visions of Hope will have outreach programs year-round.

Instead of the women coming to them, as they often do to shelters, De Loreto plans to go into the community and speak and raise awareness and “go out to the women instead of having them come to us.”

Another unique thing is thatVisions of Hope recognizes it isn’t always women who are abused. Men can be victims, too, and the program will have features to include them, she said.

“I want to show people who have come out of abusive situations that they can still be beautiful and wonderful and have good lives,” she said. “Some of them feel so worthless and ugly. “

At this time, she is partnering with the Spring of Tampa Bay, Are You Safe, Tampa Bay, and Casa.

Others are welcome to contact her by email at lorianne@vhinternational.org or call her at 813-277-8181.

The charity has applied for its 501(c)3 (tax-free status) and has received its Letter of Declaration. It is currently operating under the umbrella charity Are You Safe, Tampa Bay.

Observations: Through the doorways