Sun City Center observed its traditional Memorial Day ceremony Monday, May 26, in the Borini Theatre at the Kings Point Main Clubhouse. The ceremony started with a procession of program participants led by the Grand Marshall, SSgt. Robert Carroll, and drummers Bob Lohr and Ed James. This was followed by a presentation of Colors by the East Bay High School Color Guard. The welcome and introduction of guests was given by Thom Brown, president of the Sun City Center Military Officers Association of America, and the Invocation was given by retired Air Force Lt. Col. Samuel Rorer. The Pledge of Allegiance was led by retired Army Lt. Col. Frank Sanyour; the National Anthem was led by Rev. James Feist; retired Army Col. James Shumway introduced the honored speaker, Command Sergeant Major Frank A. Grippe of MacDill AFB. 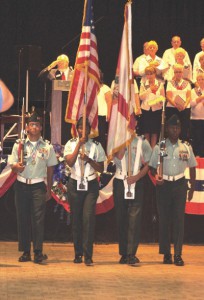 Following an inspirational presentation by CSM Grippe, a musical interlude by the Trinity Baptist Church Choir and salute to the armed forces took place. A Roll Call of departed comrades was then accompanied by a Living Flag Tribute.

Retired Navy Commander Ed Socha then tolled the bell for all of the services, and taps was played by Rev. Feist. A special presentation was made by retired Army Lt. Col. Paul Wheat to Feist for his 10 years of uninterrupted dedication to the annual Memorial Day service.