It all began in 1944 when 18-year-old Aldon George was driving a bus for the Herman Sausage Co. in Tampa. He would pick up employees living in rural areas of Hillsborough County and take them to work at the sausage plant. Seventeen-year-old Dorothy Hinson was one of his riders. That daily ride blossomed into love, and on June 12, 1944, they were married in the Hillsborough County Courthouse.

Dorothy and Aldon now reside in Kings Point, Sun City Center, and on April 27, 2014, friends and neighbors Al and Norma Hartmann hosted a celebration party for more than 70 of Dot and Aldon’s friends and relatives.

Dorothy and Aldon were both born and raised in Eastern Hillsborough County, Dorothy from Durant and Aldon from Sydney. In 1960, Aldon and Dorothy established W.A. George Upholstery in Riverview and worked side-by-side in the business for many years. It is now owned and operated by their son, but Aldon still works part-time at the shop.

Aldon and Dorothy serve as greeters at Bell Shoals Baptist Church, where they have been members for more than 45 years. 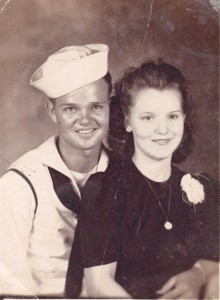 They always attribute their 70 years of happiness to their strong faith in God and respect for each other. At the celebration, Aldon expressed how much he loved Dorothy, and said: “We were never blessed with lots and lots of money, but were blessed with something even better . . . our family!”

Observations: Through the doorways