Home News They resigned themselves to resigning
News

They resigned themselves to resigning 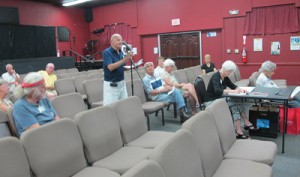 Dale Potter addresses the Sun City Center Community Association last Wednesday during the board of directors meeting. Potter and five other members said they resigned from the Consumer Affairs committee because they were not receiving the administrative support from the Association they needed to do their job.
Lia Martin photo

Eight days ago, Dale Potter, Joan Shinsky, Susan Muise and Ted Verzino verbally resigned as Consumer Affairs committee members of the Sun City Center Community Association at the end of the board of directors meeting.

The entire six-member committee resigned because, they said, they were not receiving the administrative support from the Association that they needed to do their job. They felt they had no other recourse than to resign because for the first time in more than 26 years they were being ignored and did not know why.

Their resignations were not given without thought: Verzino had served 18 years, Muise for nine years. Potter had been serving as the committee chairman for the past 26 years, until he retired from that position last year.

But did the Consumer Affairs committee any longer have, in fact, the capacity to function?

According to Potter, the Consumer Affairs committee has been serving its community since 1976.

The committee was formed to protect the residents from fraudulent, or incompetent, contractors. It was a way to help residents choose vendors of goods and services, and to obtain help if they believed the work they received from contractors was not what had been promised.

Originally the Association gave the committee its own office and a secretary, who worked part-time. So, the committee filled a need in the community. Its members were respected, and many residents turned to them for help over the years. They were volunteers and received no compensation.

From the committee’s infancy, residents would fill out a complaint form, and Community Association employees would pass along the forms to the committee to investigate the matter. If it were determined that the contractor would not correct the problem to the resident’s satisfaction, the contractor was removed from the register of contractors in good standing. The register thus became a book to which residents could refer if they needed work done.

According to Potter, the register was the “hammer” the committee used to keep contractors honest. Contractors wanted to stay on the register so they could get work in the community.

Potter said committee members could refer residents to the Hillsborough County Protection Service, or recommend that residents take the matter to Small Claims Court, if necessary.

But six months ago, Potter said, he and other members felt something was not right. Complaints no longer were being forwarded to them to discuss at their monthly meetings. Finally, Potter said, they sent a letter to SCC Community Association director Chuck Collett, who is also an attorney. They asked him to attend their meeting so they could question him about the changes they were experiencing.

Committee members said that Collett neither called them nor attended their meeting. They said they felt betrayed, as if the board of directors no longer cared about the committee nor valued the work the committee had done for more than 26 years.

“They are making it difficult for us to operate,” Verzino had said in an earlier interview. “The manager told workers in the office not to accept any more complaints about contractors.”

At the Association’s board of directors meeting Wednesday, May 14, Collett, when asked, did not comment on whether he had received the committee’s letter. It had apparently been hand delivered, and an Association employee had said the letter would be left on Collett’s desk, since he was not in the office.

The board of directors then told committee board members that the problem was a legal one. The committee’s work was appreciated, the board said, but the situation had changed. The board was concerned that the Consumer Affairs committee had been acting as a quasi-judicial committee, which could place them in the precarious position of a potential lawsuit. Board members said they had contacted an outside attorney to find out if there could be a problem down the road.

Collett said: “The problem is … there is a real, legitimate concern if the board gets in the middle of one of these things.”

Association director Neil Rothfeld said he also felt there was a legal concern to what the committee was doing. “Based on new laws made by legislators, we have to make some changes,” Rothfeld said.

“One of the concerns the attorney brought to our attention was that the committee was functioning as a quasi-judicial committee and that was not allowable under new Florida laws,” said David Floyd, also a Community Association director. He said, “We live in a strange society with an abundance of attorneys.”

All four committee members voiced their concerns to the board of directors as they resigned. At one point, Potter asked the board why the committee had not been alerted to a potential problem legally. And how would the residents file their complaints and get help?

Lyn Reitz, hired by the SCC Community Association as a manager, addressed that concern. She assured the committee members that she was still entering into the register of contractors any complaints brought in by residents.

“If someone wishes to make a complaint, or accolade, we put it in the book,” Reitz said at the meeting. “If there is an altercation, we no longer have to get in the middle of the complaint.”

When asked by Consumer Affairs committee member Joan Shinsky if the vendor was being notified about the complaint, Reitz said no one was contacting the contractor, or following up to file a complaint. They were now leaving that up to the resident to file a complaint with the proper governmental agencies, or seek legal counsel.

“In the past, things were different,” said Jane Keegan, Community Association board president. “What we’re doing is taking a professional approach.”

“They are just going to let it go,” said resigned committee member Potter. “They won’t replace [the] consumer affairs [committee].”

Many residents attending the board of directors meeting for other reasons also voiced their concerns. They felt that losing the Consumer Affairs committee would have an impact on the community. Marilyn Balkany, who has been an SCC Community resident for many years, gave her comment with real conviction. She said, “I think you’ve done something you are going to regret.”

The smell of success