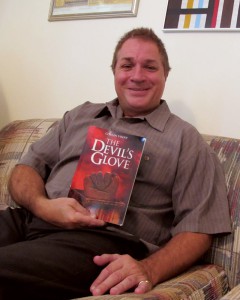 Cousin Vinny aka Anthony Agnello has received such controversial press coverage since the release of his book The Devil’s Glove that many fail to recognize the quality and message of his book.

He is well known.

It is true that he does have an infamous reputation as a male stripper. His Subway Restaurant franchise is the target of a lawsuit, and Agnello himself was indeed a target, shot at by three unknown gunmen. Agnello’s character also has been the target of a plethora of accusations.

What is clear when speaking with Agnello is he does not deny his life or make excuses for it.

Agnello says that in 1991 he had a vision, like a movie that was shown to him, and that before this “movie began,” a white-haired man told him: “It’s time to do your job. I want you to watch this. You better pay attention. It is a message to the world.”

“I jotted down every detail I could remember,” Agnello said. “I never had a moment like it, and I never will again. It was an incredible love story. It was the most pure love, but not pure. It made me human.”

That vision he wrote down became a book. Titled The Magic Glove, it metamorphosed into the The Devil’s Glove after Tate Publishing, a Christian book publishing company, contacted him. Agnello’s editor recommended he make revisions after telling him that the book was “intricate, but a captivating story, which was wonderfully told.” He emphasized that it was a good book, but that the changes could make it a great book.

Agnello said after talking to his editor, he felt humility for the first time in his life. He does not know why he was chosen to write down the vision, but he has many readers and reviewers, who have valued The Devil’s Glove. It has helped him to understand that his brief life as a journalist should be continued.

His father, Louis Agnello, was a writer for Chemical and Engineering News. His son has dedicated the book to his father, who passed away in 2006. His father had worried about Agnello’s life for years because he was so highly visible. When asked how his father would have reacted to his change in life and career, Agnello said, “I think he would have been over the moon.”

An excerpt from The Devil’s Glove:

“Michael cautiously entered the ballpark and observed nothing unusual. He pondered the thought of Billy leaving the park and getting drunk at a local tavern, but that didn’t explain why he didn’t change his clothes. Due to his poor performance during the game, he doubted seriously that he would go out in uniform and draw attention to himself. From all the years he had spent with him, he knew for sure that Billy wasn’t a glutton for punishment and only a glutton for punishment would go out in game uniform after that performance. As everyone knows, Chicago fans have a long history of being very nasty to their fallen heroes. He knew Billy wouldn’t subject himself to that. Still feeling uneasy but needing to do something constructive with his time, he decided to take a trash-collecting walk around the field. In the process of performing his chore, he glanced up toward the stadium seats and discovered Billy. What he saw shocked the hell out of him. Hanging by the neck from the upper deck was Billy Green, dressed in his White Sox uniform, wearing his green shoes, and his unique green glove. Michael was in no way ready for this, and he grimaced in pain as his worst fear became a reality. He stared up at him in disbelief and then let out the most tragic moan that the old ballpark had ever heard expelled. It was a dying groan, very primeval, the kind that was repeated too many times throughout the history of this world. It was the worst kind of agony, the kind of personal anguish that was never meant to be felt – as a father outliving his son.

The overwhelming sadness of this occasion cannot be properly expressed here. Hanging by the neck from the upper deck of that stadium was the extinguished dreams of a new generation. A part of the old man died with the son whom he never biologically fathered but whose spirit was eternally joined with his. He became painfully aware that the rest of his days on this earth would be nothing more than an extended death sentence. For the rest of his life, he would never experience the joy of love again. Michael couldn’t stop crying. The tears flowed down his face as if someone had left a faucet on. … He stared over at Billy’s body and tried to brainwash himself into believing that he was just asleep but could not convince himself of this fantasy. He then wondered if he could survive the intense manual labor of digging a grave using only a pick and a shovel.”

The book is not about religion, unless you know that the Chicago White Sox is the instrument for mankind’s redemption and that the Manager is Satan and the Light is God, no matter who or what religion a person professes. The magic glove owned by Billy sets the stage, and the characters approach God and Satan in interesting ways. This intriguing  novel is surprising and is read by many different kinds of people from every walk of life.

When asked which character portrayed himself, Agnello said, “Why…all of them.”

A reader emailed Agnello recently, saying, “A must-read for the youth of today.”

When struggling to understand why he, such an imperfect man, received the vision and was told to write the book, Agnello says a Christian friend told him, “There is a divine wind behind this whole thing. Don’t you understand? This book is way bigger than you.”

Anthony “Cousin Vinny” Agnello was a 1992 graduate of Western Connecticut State University, earning an English degree. He began as a Chippendale-style male stripper during his college years. In 1986, taking a break from college, Agnello studied with Lee Strasberg and made cameo appearances in Ryan’s Hope, Guiding Light and One Life to Live, as well as having bit parts as an actor in Spike Lee’s Crooklyn and Nicolas Cage’s Kiss of Death.