Serving through the years 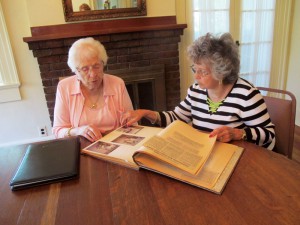 Mahatma Gandhi said, “The best way to find yourself is to lose yourself in the service of others.”

It is possible that serving others can also keep you young, if Phyllis Elsberry and Wilma Wood are examples. They are still curious, love to travel and have been living a life of service for quite a few years.

Between them, Elsberry and Wood have 172 years of living to talk about.

Both are past president of the Ruskin Woman’s Club and attribute their steady attendance at women’s clubs through the years to wanting to help others.

Their lives, though they took different paths, parallel each other in their zest for life, their happiness with not only serving but also in living.

“I wanted to volunteer and make a difference,” Elsberry said, a member of more than one woman’s organization in her life.

Thinking of when she was a young woman and about women’s changing roles, Elsberry said that the primary reason that women join a woman’s club is to serve others outside their family circle. She said that in West Virginia, when she was raising her children, the woman’s club she belonged to was called a “progressive woman’s club.” Very few women worked at that time. And the women who worked tended to help their husbands, mostly farmers, tend their farm produce stands on the weekends. So, they were available to meet in the day. Later on, when women began working outside the home during the day, they met in the evening rather than the day.

Wood worked as a medical secretary at a children’s hospital in Pittsburgh before and after she married her husband in 1951.

She still works part-time as a secretary.

Those were exciting days, she said. The hospital where she worked was among the pioneers in organ transplants, making history.

Wood later moved to Virginia Beach, then attended a junior woman’s club in 1949 in Pennsylvania.

That was the year the Miller Family deeded their family home to the club.

Dr. George McAnelley Miller, a prosecuting attorney in Chicago, also was a professor and president of two Ruskin colleges in Chicago.

After moving to Florida in 1906, he established a Ruskin College in Ruskin in 1910. His wife, Adaline Dickman Miller, founded the first Ruskin Post Office on Aug. 7, 1908, which is also known as the official founding day of Ruskin, Fla.

The General Federation of Women’s Clubs is an international women’s organization dedicated to community improvement by enhancing the lives of others through volunteer service. Since it was founded in 1890, the Federation has brought local women’s clubs from around the country and throughout the world into membership.

It is evident that both women live in the present. They are excited about the help the club can give to students hoping to go to college. The Ruskin Woman’s Club usually offers $10,000 in scholarships every year to East Bay High School students. Thirty students applied for the scholarship this year. Eight received the scholarship. The interviewing process is extensive.

The students who apply for scholarships always impress Elsberry and Wood. They said that the students mostly work and help others outside their school curriculum. They are busy and still get good grades.

Besides giving scholarships, Ruskin Woman’s Club is able to help other organizations from money the club receives in donations and in fundraising. They preserve pickles and strawberry jam, hold an annual Christmas tea and also design holiday cards for veterans. The club also rents its space every week to a church and rents two upstairs apartments. And, it allows its premises to be used for weddings and other social events.

The GFWC Ruskin Woman’s Club meets monthly at 503 U.S. 41 N., Ruskin, FL 33570. General membership meetings are held the first Wednesday of the month at 2 p.m. A second meeting or recap of the general membership meeting is also held the second Tuesday of each month. Members create and implement community service programs in the arts, conservation, education, home life, international outreach and public issues.

Brick by brick
The Ruskin Woman’s Club has a new fundraising endeavor. Personalized bricks that will hold special messages for a loved one, special event, business, or as a memorial to someone are available for purchase. The bricks will line the walkway to the front of the clubhouse.