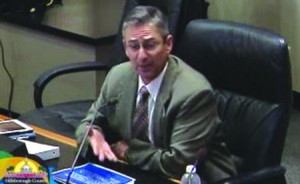 The public hearing on the amendment was lauded by commissioners, who praised county staff for listening to the concerns of Ruskin residents.

“You guys reached out. You did a great job,” Hillsborough County Commissioner Sandra Murman told staff at the April 24 public hearing. A second public hearing on the amendment is set for May 29. With no dissenting voices heard, for now, it appears the amendment is well on its way to becoming part of the Comprehensive Plan, the county’s development bible.

The bonhomie of the meeting was a stark contrast to a March 24 public hearing on the proposed amendment in Ruskin. Residents criticized the language of the amendment, saying it did not reflect the intent or spirit of the Ruskin Community Plan.

The Plan, the result of two years and more than 40 public meetings, was adopted by the county commission in 2005. The 16-page, 3,200-word Plan would guide future development in Ruskin. Or so it was thought, until a challenge by a developer last April found the Plan’s recommendations were never actually incorporated into the county’s Comprehensive Plan; hence, the need for an amendment.

The county’s first draft of that amendment, however, was “worse than useless” according to some Ruskin residents, who demanded a rewrite and called on the community to let their voices be heard on the issue.

Joe Moreda, the county’s director of planning and zoning, said he heard those concerns.

“We reviewed the input we received from the board [of county commissioners] and the community and we’ve made some edits to that language,” Moreda told commissioners. “The edits are primarily in the area of how we will review projects that are not consistent with the guidelines, so if it’s inconsistent with the guidelines, then we’ve established criteria that we will apply to projects.”

“I think the county finally has something that will work for the community,” said Mariella Smith, one of the leaders of an effort to rewrite the amendment. “It’s really important now that citizens show their support for this by contacting county commissioners,”

If passed, the amendment will give developers two choices: abide by the guidelines of the Community Plan and sail through the approval process, or provide detailed reasons why they need to opt out of the Plan’s guidelines.

At issue are specific guidelines in the Community Plan for land use, density and lot sizes in four areas of Ruskin:

Area 1: The Old Ruskin neighborhood west of downtown will feature lower density single-family housing in keeping with the traditional character of the area.

Area 2: This area east of downtown and west of the I-75 employment center will accommodate a variety of housing types, including multi-family and entry-level housing.

Area 3: This area south of College Avenue will accommodate a more suburban style and type of residential development with safeguards for the redevelopment of property along the Manatee River.

Area 4: This area southeast of I-75 will retain its rural and agricultural character and provide for enhanced interaction and access to the publicly owned lands adjacent to the Little Manatee River.

Next for the Ruskin Land Code amendment:

The Planning Commission will review the amendment for consistency with the Comprehensive Plan May 12.

Commissioners will vote on the amendment at their 6 p.m., May 29 meeting after the second and final public hearing.

Both public hearings will take place on the second floor of County Center, 601 E. Kennedy Blvd. in Tampa.