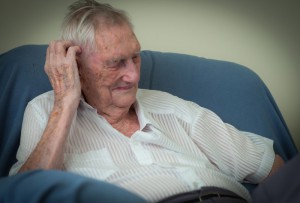 I liked Chuck the moment I met him at his Kings Point home. Living in the moment, listening to his stories, had an impact on me. I drove away feeling great. Photo Mitch Traphagen

The moment I met Chuck and Sandy at their Kings Point home, I knew that I would like them very much. I arrived a few minutes early for my 1 p.m. appointment, and Chuck answered the door with a big smile and a firm handshake. A few moments later, Sandy appeared, saying, “We were sitting at the table just yakking away and before we knew it, it was 12:45,” she said. “I told Chuck that we had better get dressed for the day because Mitch would be here soon.”

They have been married for decades and yet they can still lose hours yakking away at the table. To me, that is so cool, so admirable. The happiness they share was palpable and, indeed, time slipped by for me, too — before I knew it two hours had passed listening to their stories. Such lovely, warm and interesting people, they are a couple that is so full of life. Perhaps another incredible point: through the entire conversation, Chuck never mentioned that he was a highly decorated war hero. He never mentioned the medals he received or any other accolades. His modesty, his attitude toward life and his happiness were all inspiring to me. I was fortunate to meet them and am looking forward to seeing them again. I left their home feeling very happy.

As I drove away, I also heard Chuck’s voice saying, “You make your own luck.” Indeed you do. And Chuck has been extremely successful at making it. How he looked at Sandy was proof of that.

I have much more to say but can’t give anything away — I will be writing about Chuck, Sandy and some amazing stuff that has happened in their lives in the coming few weeks. Please check the newspaper — I’ll do my best to tell their story. I’ve always said that you could randomly knock on doors in Sun City Center and find incredible stories. Chuck and Sandy are certainly proof of that.

Richard is a big man, an imposing man. I could see that under the right circumstances, he could even be a threatening man. Richard keeps an eye on things around the marinas at Little Harbor Resort.

I was walking to the marina office the other evening when I saw him. I waved and shouted my thanks to him for being there. The wind blew my words away and also his reply in asking what I had said, thus forcing us to walk up to each other. He had no idea what to expect — perhaps I was some lunatic at night wandering around shouting at people. I saw the imposing yet professional and polite Richard right then. He was very much doing his job, and he clearly does it very, very well. I reached my hand out to shake his and said, “I was just trying to tell you how much I appreciate you being here keeping an eye on things.” I’d seen him several times over the past week and he was always hard at work, taking his job seriously, and giving me a good feeling about that.

Upon my words, he softened considerably and smiled. We shook hands and he thanked me for saying that. I wonder if enough people tell him that what he does is valuable and is truly appreciated. For him, the best results of his work is that nothing at all happens. Thus, perhaps some people don’t realize that the “nothing” is largely thanks to him doing his job with dedication.

Point being … how friendly and seemingly happy he was to hear that his work was appreciated; and how open he became as a result of the sincerity (I suspect he would quickly see through anything insincere). As a note to some of less than noble intent, I wouldn’t want to be on his wrong side — the wrong side due to the job he takes seriously — but am happy to have met him. I thanked him and he thanked me for that.

We chatted for a moment until he needed to check in on his radio. We shook hands again and I said, “It’s good to meet you, Richard.”

“It’s good to meet you, Mitch. I hope you have a nice evening,” he said warmly.

That he remembered my name after a mere chance and very quick introduction was also telling. Every extremely successful person I’ve ever known has had that talent — instantly remembering names and confidently using them. I’m quite certain he’ll remember it when I see him again on my next trip to Florida that is quickly approaching.

It really was good to meet Richard. It was wonderful to meet Chuck and Sandy. Good people are everywhere. What a blessing that is. But the reality is that meeting wonderful people is a two-way street. The best way to find them is to try to be a good and thankful person yourself. If you can do that, you’ll be amazed what you will find: people who can change your day or even your life. Barring that, you may never know just how cool the nurses are at your clinic, or how generous and helpful the guy who bags your groceries is. Without that, you could miss out on so much in life.

Live in the moment. And with that, enjoy and be grateful for that precious moment. It will never return, and it’s really all that any of us have. Enjoying it brings on the wonderful feeling of gratitude, as does a smile, a handshake, some warm words and the human connection you make. It doesn’t get much better than that.