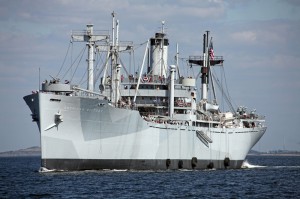 The historic American Victory ship, one of only four operational World War II merchant steamships in the U.S., will set sail on Saturday, May 3, to honor the life of Sam M. Gibbons, distinguished war hero and accomplished congressman for 34 years, as well as to honor the men and women who have served and continue to serve our country.

This semiannual fundraiser cruise helps support the maintenance and preservation of the SS American Victory.  Built in 1945, the ship served in World War II, Korea and Vietnam.

Built in California and serving primarily in the Pacific during the war, American Victory became a museum ship docked in Tampa’s Channelside District in 1999. Before arriving in Tampa, the ship last saw active duty in Vietnam before being deactivated in 1969. American Victory remained in the James River Reserve Fleet in Virginia until 1985, when she was temporarily activated again after a $2.5 million investment to bring the ship back to operational condition. She steamed only 26 hours before returning to the reserve fleet. American Victory arrived in Tampa under tow in 1999. The ship is listed on the National Register of Historic Places.

Now as a museum, the ship has again been restored to seaworthy status and, while the historical elements remain intact, she has been upgraded with modern electronics for navigation. Although guns are still mounted on deck, they have been demilitarized. Of 534 Victory Class ships built, American Victory is one of only four that remain fully operational. 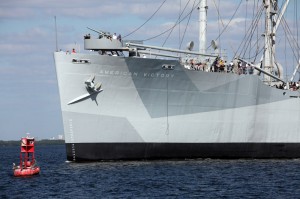 SS American Victory Mariners Memorial and Museum Ship is a 501(c)3 nonprofit organization whose mission is to honor the dedicated men and women who serve our country during times of peace and war. The ship provides daily educational tours and serves as a training facility for active and reserve military, firefighters and law enforcement officers.

The SS American Victory Mariners Memorial and Museum Ship is located at 705 Channelside Drive in Tampa, behind the Florida Aquarium.

For more information about the cruise or the ship, visit www.americanvictory.org.

Sam M. Gibbons
Gibbons, a Democrat, represented Florida in the U.S. House from 1962 to 1996. He was awarded the Bronze Star for his actions in Normandy as a U.S. Army captain in the 101st Airborne Division during World War II. On D-Day, June 6, 1944, he parachuted into Caretan, France. He served in the European campaign until the end of the war.

Shortly before German forces surrendered, Gibbons was promoted to Major, but a communications delay kept him from finding that out until after he was honorably discharged.

He was awarded the French Medal of Valor in 2004 at the Normandy American Cemetery and Memorial during the 60th anniversary of D-Day.