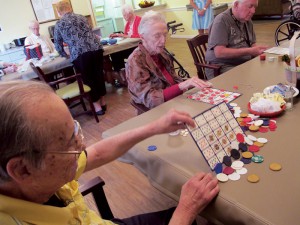 Residents play a board game at Cypress Creek in one of the neighborhoods. Photo Lia Martin

The Biggins’ family has been taking care of older folks for quite a long time. Jim Biggins says that he can remember, as a boy, taking food trays up and down the hall, serving the residents there in Palmetto when the family began taking in folks who had no other place to go.

“I was dropped off by the bus after school and did homework there,” Biggins says, “and then I delivered TV trays, and then we cleaned up. Looking back, it was the best thing that ever happened to me.”

Biggins says his parents, Jim and Shirley Biggins, started with 12 beds in the bed-and-breakfast-type establishment in Palmetto that soon grew to 110 beds. His parents were the first to have a memory-care place in the area, he says. Biggins laughs. Back then, you only needed hotel/motel licensing to be in business for taking care of the elderly. Now the requirements are very stringent, and rightly so, he says.

It is interesting that Biggins worked with his brother and two sisters. In some way or another, after college, all of them returned to help out.

By June 1999, his family opened Cypress Creek Assisted Living Residence with three wings designed by father Jim Biggins. The last addition was added in 2006. Now they have licensing for 110 beds, with plans in the making to enlarge the facility with another three wings of around 50 beds by 2015.

What is special is that this June they are going to celebrate by honoring their 15 years in business here in the Ruskin/Sun City Center area.

As you wander down the wings, or neighborhoods, you get a sense that the layout is more than orderly. On one level the neighborhoods are divided from assisted-living occupancy to memory care. The light floods the rooms because each wing surrounds an enclosed courtyard. There are only 15 to 18 residents in each neighborhood.

Sabina Raymond, Cypress Creek’s community relations director, says that each neighborhood also has its own facilities, like dining room and game room.

“The residents here are not just a name on the roster,” Raymond says.

Raymond says that filling beds is not their main goal. The task is daunting when you consider that 300 meals are served a day here and the laundry runs 24/7. She says that it takes not only a dedicated staff but also volunteers.

The volunteers often continue on here after their loved ones pass, she says. They come also to see how their parents’ friends are doing. Some have come to Cypress Creek so long that it has become an engrained habit hard to break.

Administrator Laurie Simpson says that the employees work there because they love the people.

If a resident has to go to the hospital for surgery, or some other kind of care, Raymond says she goes there to make sure they are adjusting. She says that often when she arrives, the resident’s caregiver is already there on his or her time off and also is checking on the resident.

But it is Jim Biggins who says it best:

“It has become part of the fabric of me … a kind of religious experience,” Biggins says. “You realize you are doing what you are supposed to do. You are helping people in the last stages of their lives.”