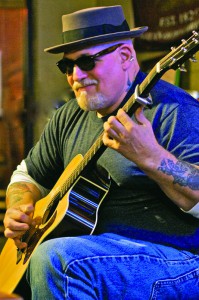 Organizers are hoping to draw more than 150 concertgoers for the Saturday, May 3, event, which will also feature a silent auction.

“We would like to see a few hundred people here for just the barbecue and at least 100 for the concert,” said Frances Hereford-Griffin of the Cultural Center. “We have had several jazz groups here and they have proved to be a big draw.”

The event kicks off at 5 p.m. with a barbecue. Craft beer and wine accompany the main dish. Country band Victoria Hawkes, featuring Victoria Ginty and Mike Ivey, will provide the music until 7 p.m.,  when Worthmore takes the stage.

Known for his quick wit and musical dexterity, Worthmore was a regular in the New York City music scene for more than 20 years. He has shared the stage with many elite blues, folk and rock artists such as Kinky Friedman, Bo Diddley, Ben E. King, Screamin’ Jay Hawkins, Lou Christie and The Platters.

While performing with his own band, The Divebombers, Worthmore was also joined on stage by such stars as Billy Idol and Paul Shaffer, band leader on the Late Show with David Letterman.

After three tours to South Africa, Worthmore bought the nightclub where he performed, The Blues Room, turning it into one of the most prestigious live music venues in Africa.

Worthmore’s show is interlaced with humorous comments and anecdotes about the songs, his life and his music.

Tickets for the event are:

The event includes a cash bar.

In addition to the barbecue concert, the Center will also screen Pharmboy as part of its ongoing film series May 8, with Bella Vita hitting the screen May 22. A Latin Roots concert is set for May 9.

“We have so many different types of things happening here, I think there is something for everyone,” said Hereford-Griffin, who also credits executive director, Georgia Vahue, with building the profile of the Center.

For more information and tickets, call 813-645-7651 or visit firehouseculturalcenter.org.