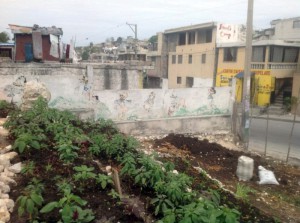 An urban gardening project teaches Haitians how to grow their own food from seed. Photo courtesy of Hal Ott

These are but a few of the words that come to mind after my most recent visit to Haiti. I have been witnessing the ups and downs of the people of Haiti since my first visit to the country in April 2000. These people have suffered from corrupt governments and endured some of the most horrific natural disasters ever since they became free from slavery in 1804.

A gentleman in his sixties who moved to Port au Prince from a comfortable lifestyle in Canada told me once that Haiti was a “land of failed good intentions.” He explained that most of the aid going to Haiti was from churches and service organizations from the United States and around the world. People with the most loving and giving hearts bringing clothes, love, food, candy, beads and a labor force to build new churches, church schools and to feed countless starving children and adults.

For many years I was one of those Good Samaritans. And perhaps there is a need to fill a gap, to build hope and to provide food and a sense of belonging to something. Certainly, there was an urgent need to give them a leg up after the recent natural disasters.

But Jack Wall, the Canadian, and his wife, and now his daughter, taught me what Haitians really want. They do not want a handout. They do not want someone else coming to their country to tell them how to live and what to do or what to believe. For, in doing so, we help to create a country of beggars with poor self-esteem and a lack of dignity and self-respect.

The future of Haiti must be rooted in its people’s desire to be responsible, productive, participatory citizens. The rebuilding of their country must be in the hands of the Haitian people. Begin with what they have. Build on what they know. Work with them in their planning for a sustainable future.

In my nearly 14 years of witnessing the changes in Haiti, this trip was the first time that I have seen real change. I believe President Michel Martelly and his government have truly accomplished more to empower the people and to help Haitians to help themselves than in any other time in the past. New roads, bridges, sanitation, health care, foreign investment, jobs, a safer environment policed by the Haitian police — all are but a few of the advancements I noticed.

There is a rebuilding of the country from the bottom up and from the top down. This was the first time that I entered the country that the smell of burnt charcoal did not permeate the air. Reforestry projects are increasing. Small rural farmers are getting small loans to practice sustainable agriculture. Haitians teaching Haitians and helping one another.

I visited a hospital in the central mountainous village of Mirebalais. The hospital was founded by the renowned Harvard physician Dr. Paul Farmer. Farmer is perhaps the world’s foremost leader and expert on global health care for the poor.

Named Hospital Universitaire, the facility just celebrated its first anniversary. It employs 56 Haitian physicians, more than 100 nurses and approximately 700 other people, more than 99 percent of whom are Haitian. The hospital covers more than 200,000 square feet and is equipped with the very latest technology. It offers nearly all specialty areas, including infectious disease, surgery, obstetrics, ophthalmology, dentistry, cardiology and oncology.

It has more than 300 beds. The entire medical facility, including dorms for doctors and nurses, is 100 percent solar powered. The cost for admission for care is the equivalent of $1.25 per person.

It serves not only a local population of 185,000 but also special-care patients who travel from Port au Prince, a three-hour trip. Yes, to get the project built necessitated support from around the world, but it is a hospital built, staffed and run by Haitians for Haitians.

I also visited an urban gardening project in a very poor part of Port au Prince. There I saw Haitians teaching and helping their neighbors to grow their own food from seed. They use any container available — from the back casing of an old television to an old tire. Within 15 days, they can harvest spinach to feed their families. Any harvest left after filling the needs of their families is given to their neighbors. A sense of community and trust is built.

In this one project, more than 170 people were growing beans, spinach, cabbage, carrots, tomatoes and other food that was totally unfamiliar to me. It is a project developed by Haitians, owned by Haitians and managed by Haitians.

Don’t get me wrong. I have no false illusions about the challenges that this country faces. With the average age of a Haitian being 22, and 200,000 new people coming into the workforce every year, there is no quick-and-easy fix. But foreigners must recognize that the hand-out philosophy of past decades has not worked to rebuild this country.

With perhaps a million people willing and able to work, does it make sense for our high-school-  and college-age students to go to Haiti to lay cement block for them? Will Haitians feel like they own that church or that church school that we foreigners have built for them? Yes, it makes us feel good about ourselves, but this is not a sustainable, participatory way to build a country of responsible Haitians with self-worth and dignity.

The empowerment of women is helping. Ending the myth that this beautiful island is not safe for tourists and foreign investment also will help. Sitting down side-by-side with Haitians who have a plan for a productive, participatory project and sharing with them ideas for them to reach their goals is, in my opinion, the best road to their future.

Dr. Hal E. Ott is owner of the Ruskin Animal Hospital and Cat Clinic and manager of Ott’s Off Leash Dog Sanctuary in Ruskin, Florida (a 501c3 nonprofit organization).