All too soon enough 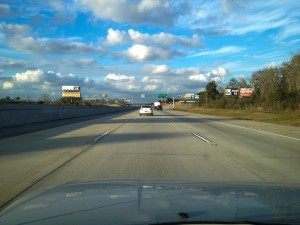 One of the few advantages of a 1,700-mile drive from the bottom of the country to the top is having copious time to think. The road of life has many interesting milestones. Mitch Traphagen Photo

I think it possible that the road to hell is paved with 13 lanes running northbound out of Atlanta. It is truly amazing that anyone gets out of there alive. Oddly, it reminds me of life itself.

One of the few advantages of a 1,700-mile drive is the copious time to be lost in thought. Life today moves so fast, with so much stuff competing for attention that it seems time spent simply thinking is nearing extinction.

On this drive, I realized that many of the milestones in my life have involved traveling. And yes, even Atlanta is a milestone of sorts. I’m sure it’s a nice enough city, just as I know that Georgia, off the I-75 corridor, is a beautiful state with wonderful people — but it’s hard to see that from the freeway. That’s when I realized that life is a lot like that. You have to get off the fast lane and stop to look around to really appreciate things. The beauty is in the back roads, both in Georgia and in life.

On my car stereo I called up some songs by a friend and talented musician named Eileen Quinn. She wrote music for cruisers — the small and eclectic group of people who travel the oceans with their own homes, homes that have masts, sails and keels on them. I thought back to one particular evening in one particular harbor in the Bahamas. Michelle and I were at home, far from home, on our sailboat, Hetty Brace. It was a perfect early evening in January with a magical golden light contrasting beautifully with the crystal clear turquoise water. We dinghied over to Eileen and her husband David’s boat to purchase her latest CD, which she autographed for us. We sat in our dinghy, they sat on the deck of their boat, and we just talked. Time and the world was ours. Hundreds of boats at anchor in that harbor represented a disparate group of people who all had one thing in common — they had all sailed to this place from somewhere far away. I don’t remember what we talked about but I remember feeling so very good. Thinking about it now, I can still feel it.

There are so many other similar powerful instances in the road of my life: a warm evening watching the sun set after a string of bitterly cold nights in a boatyard on Cape Cod and the haunting quiet of another boatyard off the Chesapeake in the evening after a day full of noise and frenetic activity. Catching rides and getting lost in buses, cabs and overcrowded cargo vans. Being advised to visit the “Pink House” for lunch in a small town in the Dominican Republic only to find a street full of pink houses and being left to guess at which house served lunch. I still don’t know if we guessed correctly but the lunch was wonderful. I remember another lunch, this time in Chinatown in New York City. We sat at a long table with a group of elderly men and found that our waiter had not charged us enough. We tried to point the error out to him, but he grabbed our check only to reduce the price even further.

One of my teachers from high school is in a nursing home in a rural town in Minnesota. In my mind’s eye, I can still see him teaching, he was a tough teacher but fair. That teacher was proof that you can take the man out of the Army but you can’t take the Army out of the man. He could be gruff, perhaps scary to some, but he actually cared enough to make sure his students learned something. I remember one day when a kid asked if he had ever killed anyone. The teacher looked back at the student with all seriousness and said, “Yes.” He did so in the service of this nation in World War II and he did not take that lightly. But it certainly cemented a distinct toughness about him in the minds of some students. After the war, he served the future of this nation by becoming a teacher.

His long road in life is ending at that nursing home. It is difficult to reconcile the image of a tough but dedicated teacher more than three decades ago with the man I now see spending his days asleep in a wheelchair. Every once in a while, he wakes and calls out for help; perhaps calling out to people who now only exist in memories. His wife is gone, except in his mind; mixed in, no doubt, with many false voices, sights and echoes. His body is here; his thoughts and his true essence are elsewhere.

For one attractive elderly woman in that nursing home, every single day is a new beginning. Each day I arrive, she introduces herself and asks what my name is, where I live and if I’m married. She tells me about going to college and getting straight A’s. She can’t remember where she went to college or what she studied but she remembers the happy parts, and that is the important thing. And each and every day she wakes up to a world still full of opportunities and discoveries. She is happy. It seems she has found her way out of Atlanta into the beauty of the back roads forever.

Children from a nearby school come to sing Christmas carols in the nursing home. I remember doing that as a child but it took until I was 50 years old to appreciate the importance of it. And now, I sit next to my mom and listen and fight back tears for some inexplicable reason. The singing is so beautiful.

There are so many milestones in life, so many points where we are at the top of our game — school, jobs, marriage, kids, our kids’ graduations, our kids’ marriage. It is all so wonderful and it is all so very fleeting. Our time is right now, in this moment. At some point, the moment will be gone and, if we’re lucky, we’ll be left with memories wonderful and beautiful like the back roads of Georgia. And then it will be someone else’s turn to be at the top of their game. But no matter what else, we are all headed in the same direction. Even infants get older.

It’s almost dinnertime in the nursing home. One woman sobs quietly at the table, a deep sadness known only to her. The man in a wheelchair next to her reaches out for her hand, their fingers touch but they don’t clasp. I see my former teacher wheeled in and I think about walking over to him, to tell him that he was a good teacher and that I learned much from him — not just from the books in his class, but also from him. There are too many people, though, and before long, he falls asleep. I’ll try again tomorrow although I don’t know if he’ll hear or understand me.

Outside, a carload of kids wearing high school letter jackets are goofing off, laughing and flipping each other the bird. I smile, too. This is their time and they have no idea what is lying ahead down their roads. Atlanta or the back roads, it doesn’t really matter to them. Despite they are just outside of a building filled with the seriousness of life and death; I won’t scowl at their laughter and obscenities because at that age, life is forever. All too soon enough, they’ll find out it isn’t.

P.S. Yesterday I told my teacher that he was a good teacher, that I learned from him and was grateful to him. He looked at me for a moment and then nodded.