Counting the years of coffee and conversation

The Coffee Cup: Counting the years of coffee and conversation 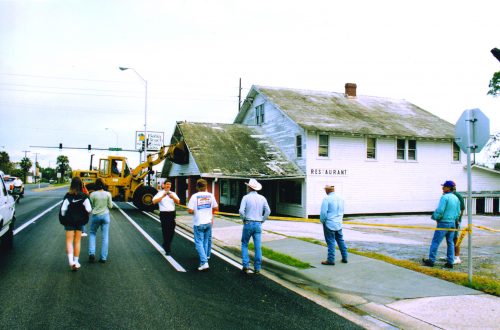 Photos are part of the “Ruskin History Project” RuskinHistory.org
The Coffee Cup was dismantled in 1999. Over 100 years of history was erased in a matter of hours and the Ruskin landmark is still missed today by many locals.

RUSKIN – No Ruskin history would be complete without the story of William T. and Mary Walker, owners of Ruskin’s Coffee Cup restaurant for more than 50 years.

When William, known locally to long-time South County residents only as “Willie”- died July 11, his cremation was held quickly and many of his friends have since said they weren’t even aware he had died.

Willie’s wife Mary also died on July 11, only in 2002, and with his death last month came the finality that yet another Ruskin icon had passed forever.

Immediately following his short obituary, his friends began to call The Observer News with stories of his years in Ruskin and how he, and Mary, had done so much for so long with so little recognition in recent years.

As long-time residents already know, the Coffee Cup was one of the original buildings in Ruskin. Built in the late 1800s, rumor has it that the first structure was originally a tea room, although there is nothing in the historical records today to back that up. Photographs of the building before the famed Coffee Cup sign was hung in front still exist in various places however, including the Internet on several historical sites. These show horse and buggies hitched outside what was obviously the building when it was first constructed of what was later to become the last tongue-and-groove wood frame structure in the area until it was razed.

Fred Jacobsen, dedicated founder of the Ruskin Historical Society, has a link to a YouTube video of it coming down in 1999 that may be viewed at www.YouTube.com by typing in Goodbye Coffee Cup Restaurant, A Farewell to an Old Friend.

When I first moved to Ruskin from Bradenton in 1979, it was the place all the old-timers gathered. My late husband, Robert Fletcher, a third-generation commercial fisherman, ate there often, as had his father and probably grandfather as well.

It is rumored more deals were made there than in any bank, law office or business in town.

But that’s not all there is to the story. 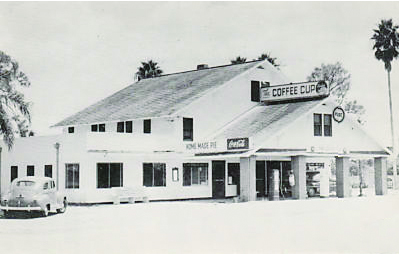 This circa 1940s postcard of the Coffee Cup Restaurant features the Pure gas pumps in the front. US 41 was a considerable distance from the building at this time.

The real story is with the people who frequented, and owned, the old clapboard building that served as a restaurant, grocery store, and butcher shop for so many, many years.

People all over town were glad to share their stories with me as Willie and Mary were greatly loved.

“Our earliest memories are of shopping and eating there,” said Frances Hereford. “I moved here in 1953 and right away my family learned they had the best coffee and pies in town. We also bought our meats and groceries there. Willie was the butcher, Mary made the pies and cooked fried chicken and other dishes. Every Friday night our family went there for hamburgers and coconut cream pie, it was the big treat of the week because we didn’t get to eat out often back then.”

Sandy Council remembers that the Walkers sent cards and small gifts to people all over town. “If a child graduated or went in the military, or if somebody had a baby or got married, they sent at least a card, and sometimes a gift,” Council said.

“These were caring loving people. The kind you were proud to know and call your friends.”

Council remembers when Willie also pumped gas and checked the water and oil in their vehicles. “I was a teacher at Ruskin Elementary School and all the teachers went there every day after school for their planning period and pie.”

It is not known exactly when the gas pumps were removed from the front of the store.

Polly Rothenbush had a different experience than Council and Hereford, because she was employed there.

Her father owned The Sharecropper, which was another restaurant in town in the early days. But instead of being competitors, the men were friends.

In fact, Rothenbush worked some days at her family’s place and others for the Walkers. 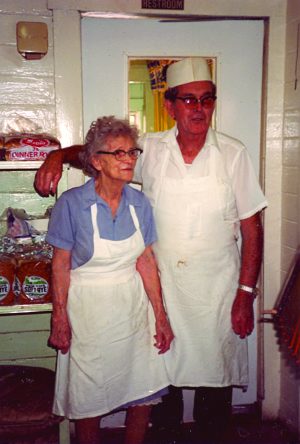 jonie maschek photo
William T. and Mary Walker ran the Coffee Cup restaurant on the southeast corner of U.S. 41 and Shell Point Road in Ruskin from 1936 until it was torn down in 1999.

“My dad, Leonard, heard somebody talking bad about the Coffee Cup one day in his restaurant and told them to get out. He wouldn’t even serve him. Now that’s friendship,” she told me.

Rothenbush told me of the day Norman Vincent Peale (the famous writer and preacher) came to town and ate there. “He said the key lime pie was so good his brother had to come all the way down here to buy them.”

Mary Walker bought fresh lemons and limes for her pies from a Mrs. Baker who lived along the Little Manatee River. She also made apple, strawberry and butterscotch pies, Rothenbush recalled.

“We’d see them snapping beans and shelling peas on the porch, and then donning aprons and working inside. They did everything, but most of all, they made friends and cared about their customers,” Rothenbush said.

“He even sent flowers to me when I had my two children,” Council remembered.

Before the movie Fried Green Tomatoes was produced in 1991, the crew was looking for the perfect place to film as the fictional Whistle Stop Café.

They approached Willie and Mary Walker.

“But Willie said it would inconvenience customers to close down even two days for filming,” Council said. “So they didn’t do it there.”

And so, the well-renowned Coffee Cup in Ruskin did not become the famed Whistle Stop Café of the award-winning film starring Kathy Bates.

It seems Willie knew his customers in the grocery store and butcher shop well enough that if they asked for an extra pork chop he would ask them who was coming for dinner, Council said. “He always knew exactly what we needed. What our regular orders were. He made it his business to know what we needed and have it for us.”

The Walkers took over the business from Esther and Paul Dickman who started it in the already-existing building and hung the first Coffee Cup sign in 1929.

According to Aleta Jonie Maschek’s historical series available for view at libraries all over Hillsborough County, Piece of History, the Dickmans owned the restaurant from 1929 to 1936 when they sold it to the Walkers who ran it until it was condemned by the county and razed in the spring of 1999.

For more information about Ruskin history, visit the Ruskin Historical Society, P.O. Box 879 Ruskin, FL 33575-0879 or see it on line at  www.ruskinhistory.org. 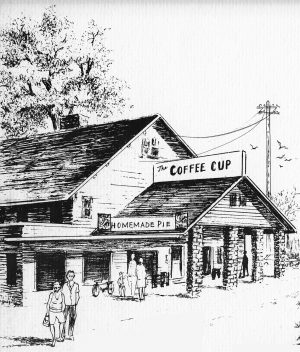 provided by Fred Jacobsen / Ruskin History Society
This artist’s rendering of the well-known Coffee Cup restaurant was done by Jo Tarabula in 1985. But at that time, the building was already almost 100 years old. Built in the late 1800s, it was the main stop for tourists and truckers along the old Tamiami (Tampa-Miami) Trail, on what is now more commonly known as U.S. 41. 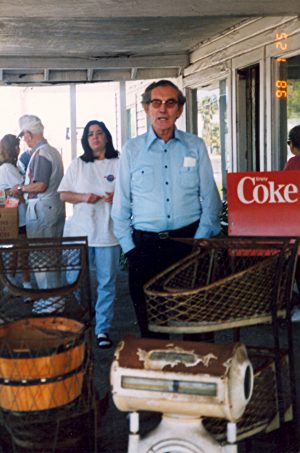 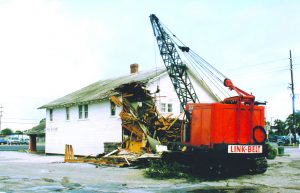