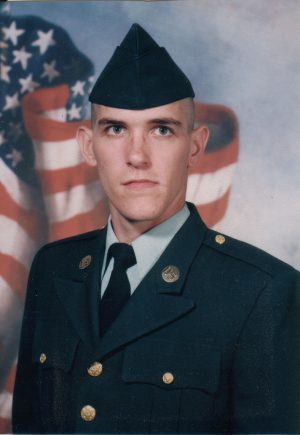 I met Cody Orr too late. By the time I knew of him, by the time I knew about this gentle, polite young man, he was gone. Even so, I tried to get to know him through the people that knew and loved him. It was clear that Cody had impacted those he met. In fact, Cody has even had an impact on those that he had never met. I can personally attest to that.

Cody died while serving his country in Iraq. He was a Private First Class in the United States Army. He was a son, a grandson, a brother, a nephew, a husband and a friend. He arrived in Iraq in April of 2003 and ultimately became a part of history. He was a member of the 1st Battalion, 44th Air Defense Artillery of the 4th Infantry Division. It was this Division that captured Saddam Hussein.

He was the baby of the family – a really big family.

“When he was growing up he always got his way,” said his brother Scott. “You just look at him and you couldn’t tell him no. He was the baby, whatever he wanted, he got.” More than a decade separated Scott and Cody in terms of age. But Cody still made his mark.

According to his sister Leoni, Cody was happy and carefree but also purposeful and driven. “He didn’t have a care in the world,” she said. “Nothing really got to him. But if he felt that he was right about something, he was tooth and nail until he got it.”

Leoni and Cody were four years apart in age but inseparable in life. “We were two peas in a pod,” she said. “We went everywhere together – we were together all the time.”

As they grew up, one of Leoni’s most difficult days were when she left Ruskin to move to Tennessee. “When I moved away it was really hard,” she said. “Cody helped me and my husband pack up the U-Haul. It was really hard.”

But neither time nor distance separated the two. Even after Cody left for Iraq, he would call and everything would be just like it always was. “We were so close, we could always pick up right where we left off,” Leoni said. “That’s my baby brother. He was my baby brother.” By just being himself, Cody had made his mark.

Cody seemed destined to serve his country in a time of need. At the age of 10 he joined the Civil Air Patrol. A few years later, he volunteered with the Red Cross. He made himself available for those in need when they needed him. Joining the United States Army was, therefore, a natural progression for him.

The defense of his country and the protection of his home and family were clearly paramount to Cody. He knew what he had to do in Iraq, he knew what he was doing was right. It is also clear that Cody took on his mission with dedication, loyalty and thoughtfulness. He was there not out of agenda or malice but rather with a full heart driven to protect home and country. Cody had proven himself to be a gentleman and a distinguished soldier worthy of all honors.

In the Gettysburg Address, President Abraham Lincoln described it as the last full measure of devotion. President Lincoln went on to say, “…we here highly resolve these dead shall not have died in vain.”

In his twenty-one years, Cody Orr served his family as a son, a friend and a husband. He served his community as a volunteer ready to help in the worst of times. He served his country as a loyal and dedicated soldier during a time of war. To all of those and more, Cody Orr gave his last full measure of devotion.

Those who knew him and those who met him too late will ensure that it was not in vain. Cody has made his mark on us all. He didn’t try to do that, he just did by being the man he was.

A funeral with full military honors was held on January 28 in Kerrville, TX. A memorial service will be held locally on February 7 at 11 a.m. at the Simmons Loop Baptist Church in Riverview. The church is located at 6610 Simmons Loop. The telephone number is 677-9310.

Cards and messages may be sent to the family via the Grimes Funeral Home, P.O. Box 290170, Kerrville, TX, 78029. Condolences may also be sent electronically at www.grimesfuneralchapels.com by selecting the “Send Condolences” link.