Brooks, 73, feels he has a responsibility to do so.

“I’ve always got my hand out when I network to build my business, so I feel it’s important to give back to organizations in the community I believe in…to the extent I can,” the Alabama native said. “There’s great satisfaction in helping someone, and, the thing is, you never know when you could be the one who needs help.”

His benevolence touches many. 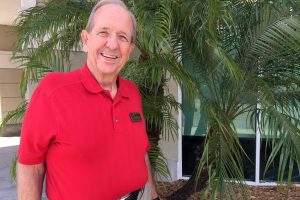 LOIS KINDLE FILE PHOTO
Larry Brooks, a longtime reverse mortgage consultant with A&A Mortgage Funding, has a passion for helping seniors and others in need.

“Larry is one of the kindest, most caring and compassionate individuals I know,” said longtime friend Jill Andrew. “From working with seniors to whipping up one of his famous cheesecakes for charity (fundraisers), he’s always willing to help people in need.”

“He’s a genuinely nice guy, one of the most giving people I know,” Booth said. “I see him on a regular basis, and (pre-COVID) we normally socialize together. He’s very involved with charity work as both a volunteer and donor. I bet he gives away $1,000 a year in cheesecakes alone.

Brooks is a charter and board member for Better Living for Seniors Hillsborough, a charitable group that’s currently getting toiletries together to give to roughly 300 seniors in need for the second year in a row. Its also provides an academic scholarship for a college student studying for a career working with seniors.

As a licensed (NMLS#244565) reverse mortgage consultant for more than 13 years, Brooks has attended 16 elder law forums over the years and is a referral source for reverse mortgages for The Senior Connection Center.

For the past seven years or so, he’s has volunteered for Operation Helping Hand, a nonprofit group that helps wounded, active military members and their families. Brooks, who served three years in the Army in the late 1970s, works in the kitchen every month in support of its dinners and fundraisers.

And he facilitates, Marketing Mania, a networking group for people who primarily work in the senior care market.

Brooks is on the leadership team of the Leukemia and Lymphoma Society; supports the annual Women of Distinction Luncheon, which raises money for the Girl Scouts of West Central Florida; volunteers for and donates to Faces of Courage, an organization providing free camps for women and children with cancer; and personally gives a $1,000 scholarship each year to a local female high school senior. He also makes donations to many nonprofit organizations, including the South County Spartans, Feeding Tampa Bay and the Critter Adoption and Rescue Effort no-kill animal shelter in Ruskin.

“Larry has always been a strong supporter of C.A.R.E.,” said Penny Smith, its board president. “He’s one of those people who, when asked, will help in any way he can, and he’s one of the best community resources we have when it comes to helping seniors. He gives back at every opportunity.”

On a professional level, Brooks has been named a winner of the Carrollwood Area Business Association President Award and Volunteer of the Year for the Greater Riverview Chamber of Commerce, where he a member. He’s also currently a member of The Sun City Center Area Chamber of Commerce.

In the past, Brooks has served on the boards of the West Tampa, SouthShore and Greater Riverview Area chambers of commerce.

It’s no wonder people who know him think he never sleeps.