Inspired Living at Sun City Center has added a new program for its senior residents to help them hold on to some level of cognition, even as they struggle with Alzheimer’s Disease or dementia.

The Fit Minds classes, offered weekly and monthly at the memory care facility, use methods to mentally stimulate the seniors.

“We are a purpose-built community, designed to focus on the needs of memory care residents,” said Sharon Flynn, who represents Inspired Living. “We specialize in Alzheimer’s and dementia care. All of our residents have some form of it.” 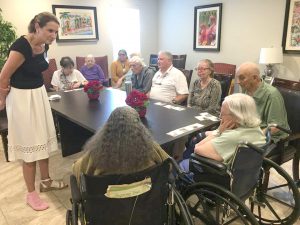 Inspired Living decided to bring the Fit Minds program to its residents because it is a cognitive stimulation program that provides both one-on-one and group sessions.

Flynn said that classes are led by certified coaches. “We have been blessed to have our program director, Tyco Welch, become certified.” She assists the Fit Minds coaches and can also host classes on her own.

“We started Fit Minds in May with an introduction,” Flynn explained. “We did a ribbon cutting last month with the Greater Riverview Chamber of Commerce to introduce it to families in the community.”

This is not a service every senior living facility offers, she said.

“It really does focus on cognition for our population. Memory care residents can’t remember things, but they still know things. They do exercises customized for that cognition.”

Fit Minds uses a variety of programming, including math and vocabulary. “They literally do the things we learned in school,” Flynn said. 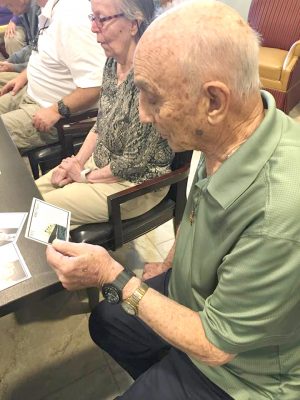 In addition to the classes and one-on-one sessions, Fit Minds also offers daily exercises seniors can do to remain as sharp as possible for as long as possible, according to its website.

“We have a coach who comes in twice a month for a large group and a smaller group. Classes are twice a week with Tyco,” Flynn said.

While the public is not invited in for the classes, the families of residents are encouraged to attend, she said. That way, they can see what their parents or grandparents are getting from the program. “They can go through the program with their loved one.

“If I am working with a family considering Inspired Living, that is something I would invite them to do is go through a session.”

Inspired Living has 35 residents at present and 58 private and shared rooms set up like bedrooms. Families furnish them.

“It’s built kind of like a hug with a beautiful courtyard in the center,” Flynn said. “Residents have freedom to go in and out of the courtyard. There are walking paths, a gazebo for shade, three screened porch areas and a mini putting green.” There are even garden beds for gardening. “They are safe to be out there on their own.

“We want them out of their rooms and engaged meaningfully throughout the day, including for meals,” Flynn said.

“There have been a lot of studies that found it is beneficial to still be able to do those things, along with listening and recalling, which is what Fit Minds offers,” she said.

Starting it in Canada, Janet Knupp brought the method to the United States where she now acts as president and CEO of the U.S. program.

“Sometimes the more stimulation they have, it can keep them at a level in their dementia journey for longer,” Flynn said. “Janet, personally, had her mother go through it and saw her plateau. Any type of stimulation you can do is good.”

Back to School – Back to Nature