No more texting while driving! 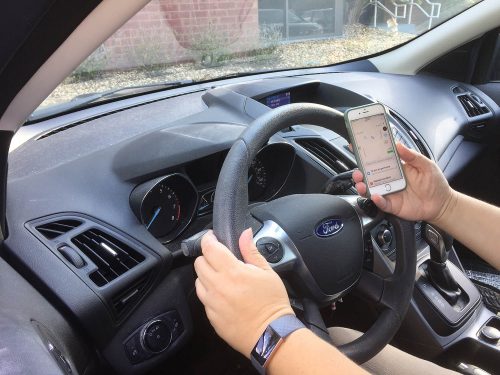 Heads up! New texting while driving law is in effect

For all those who spent the holiday week unplugged, here’s a heads-up and thumbs-off news flash!

Florida’s long-awaited law making it a primary offense to text and drive went into effect on July 1. Law enforcement officers can now pull over Florida drivers and ticket them for texting while driving. This includes not just texting but emailing and other forms of typing on any mobile device.

Florida is one of the last states to implement a law making texting while driving a primary offense. It is part of the State Uniform Traffic Control statute for wireless communication devices.

The first conviction for this offense is a $30 fine, but no points.

A second conviction within five years is considered a moving violation with a base fine of $60 and three points on your license.

Any further convictions for texting while driving are considered a moving violation with a $60 fine and three points on your license.

The American Automobile Association, or AAA, sent out a press release recently noting that it supports the new law. In 2018, there were more than 51,000 crashes involving a distracted driver in Florida. On average, that is 140 crashes every single day, according to AAA. A driver’s eyes are off the road for an average of five seconds while texting, but at 55 miles per hour, that is the equivalent of driving the length of a football field, said AAA Spokesman Mark Jenkins.

While 35% of drivers in a recent AAA poll admitted they still text and drive, 78% say they realize it creates a significant danger. “Drivers who text are eight times more likely to be involved in a crash,” AAA’s Jenkins stated. “Typing on the phone diverts drivers’ attention away from the road and endangers the lives of all motorists.”

He said AAA urges drivers to put down their mobile devices and focus on the road. “Hopefully, the threat of being caught will be enough for drivers to change this dangerous habit before something bad happens to them or to anyone else.”

In signing the new law into effect, Gov. Ron DeSantis said that in 2016, Florida had nearly 50,000 accidents caused by distracted driving and resulting in 233 deaths. He said in a statement,“Studies have shown that texting while driving is one of the worst of all driving distractions, and a recent study ranked Florida as the second worst state for distracted driving. It’s my hope that by taking action to address distracted driving today, that we will be able to make our roads safer and, hopefully, prevent some of these crashes that we’ve seen, [some of the] injuries, and, unfortunately, some of the deaths that we’ve seen.”

The state of Florida does allow hands-free voice-based texting, but AAA warns that it still distracts drivers. Research from its “AAA for Traffic Safety” report found that any potentially unsafe mental distractions can persist for up to 27 seconds after using voice commands to change music, dial a phone number or send a text.

“Just because you can use hands-free technology doesn’t mean you should,” Jenkins said. “AAA research shows that drivers who use voice-based technology are still distracted. When using this technology, your hands are on the wheel and [your] eyes [are]on the road, but your mind may not be on the task of driving. AAA urges drivers to minimize all distractions while behind the wheel and focus on the road.”

There is also a handheld cell phone ban, but it does not go into effect until Oct. 1, with fines beginning Jan. 1, 2020.