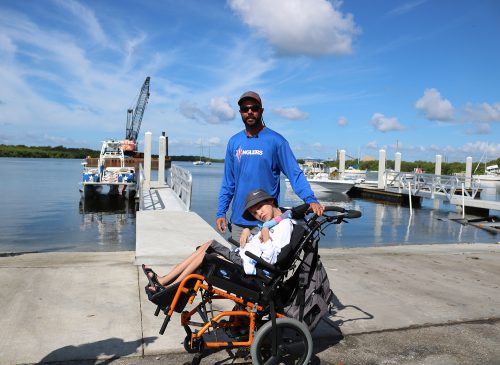 Greg Leonard with his son David above, said it used to take two people to load the wheelchair and David onto the boat. The new ADA-compliant floating dock makes it easy to enter and exit a boat no matter what the disability.
STEPHEN FLANAGAN JACKSON PHOTO

Three generations of Leonards from the Gibsonton/Riverview area have enjoyed the Williams Park boat ramps at the Alafia River just west of the U.S. 41 bridge. On a hot, muggy July 1, with blue skies overhead, the new boat ramps were officially opened again after a six-month hiatus for a renovation project. The Leonards were well represented. 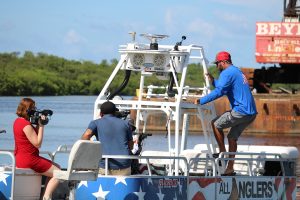 Greg Leonard, owner of All Anglers Inshore Fishing Charters, boards his pontoon boat that he offers to disabled veterans and anyone with disabilities who wants a day of fishing or sightseeing.
STEPHEN FLANAGAN JACKSON PHOTOS

“I used to come out here a lot with my dad before he died,” said Greg Leonard, reminiscing about all the good times on and near the water with his father, also named Greg. Leonard works full time at Caterpillar in Riverview, but also has a pontoon boat and provides charter services to the general public and, especially, to disabled veterans and others who have a difficult time getting around on their own.

Greg’s own son, David, 15, has not been able to walk or to talk since birth. But his eyes lit up as his dad wheeled him along the newly refurbished floating ramps and loaded him onto the pontoon boat for a spin in the Alafia River. The area was crowded with news media, cameras and reporters, chronicling the long-awaited re-opening of this spot on the Alafia River, which runs under the arching U.S. 41 bridge near the egress into Tampa Bay, in the shadow of the giant Mosaic Company facility.

“It used to take two of us to load my son David and his chair onto the boat,” smiled Leonard with pride, as he pushed his wheelchair-bound son along the new floating dock, which makes it easier to get David on and off the boat. “This is amazing,” said Leonard, “and has been needed for a long time.”

Leonard’s charter service can be found on Facebook by searching for All Anglers Inshore Fishing Charters or calling 813-494-2324. 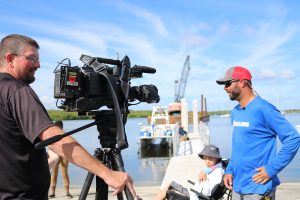 The media was in full force at the reopening of the Williams Park boat ramp in Gibsonton on July 1. Greg Leonard, right, is pictured with his son David who will benefit from the new floating dock that is ADA compliant.

The Williams Park boat ramps have been closed since December 2018. In addition to resurfacing the ramps and improving the fishing pier, the fixed docks have been replaced with ADA-compliant floating docks. The docks rise and fall with the tide, keeping the dock surface a constant distance from the water and making it much easier for those of all abilities to use the docks.

Boating is a popular pastime in Hillsborough County, which has more than 39,000 registered vessels. Williams Park in Gibsonton has the county’s second-busiest ramps, with an estimated 12,000 boat launches annually. The $700,000 remodeling project was paid for through the Boating Improvement Fund with boater registration fees that are earmarked for projects that directly impact boaters.

Williams Park is scenic and small but sports a tiny beach and children’s playground, as well as the three new boat launching ramps and an upgraded fishing pier, all of which were experiencing heavy use again this past Monday. The park has easy access to the upper bay and to Beer Can Island.

Williams is the largest of Hillsborough’s current $2 million improvement program for area boat ramps. Others around the county include

• Ruskin Commongood Boat Ramp, 1106 1st Ave., Ruskin: Redo the ramp, tear out the old concrete docks, install a new dock system and repair the seawall. Work is anticipated to start during or before September.