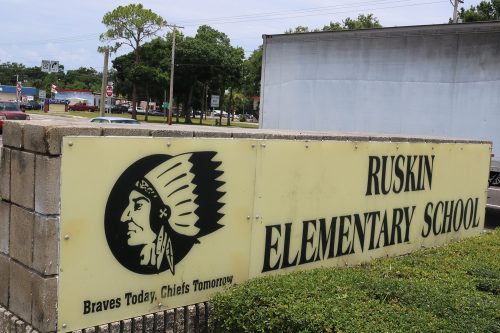 Is it the Rockets or is it the Braves for Ruskin Elementary School?

The Hillsborough County School Board wants to take a second look at a previous decision, mandating that Ruskin Elementary and four other elementary schools in the countywide school district drop the “ politically-incorrect” mascots and nicknames they have had for years.

The school board is scheduled, after press time on June 11, to discuss the matter again and, possibly, walk back or re-vote on the mascot/nickname controversy. This follows a school board unanimous vote at a June 4 meeting to request the superintendent to hold back on any prescribed changes to the elementary schools with native American themes such as Braves, Chiefs or Warriors.

Acting on orders from school district headquarters, Ruskin Elementary had complied with the previous board request to drop its Braves’ nickname and to come up with a new nickname on ballots distributed to students, staff and families from a designated, sanitized list. HCSD had requested the changes after months of meetings between school officials and parent advisory committees from Native Americans in the county. Ruskin was one of six schools being asked to designate a new mascot that is “ welcoming to everyone and does not make anyone feel like they are not respected.” The other schools being asked to change are Brooker, Forest Hills, Summerfield and Thonotosassa, all elementary schools, and Adams Middle School. East Bay High, known affectionately and respectfully as the Indians, and Chamberlain High, known as the Mighty Chiefs, had both been exempted from the change order by the school district because the two high schools, according to the HCSD, had worked to modify any negative element of how they portray Native American cultures, and they had made significant changes through a partnership of students, staff and parent advisory committees.

Rehashing the proposed nickname changes at the June 4 school board meeting was sparked by a presentation at that meeting by a Brandon petition, bearing hundreds of signatures, protesting the change by Brandon people who do not want to delete the mascot of the Brooker Braves, a change which, they claim, would result in disrespecting the school’s history and identity and also waste money.

After the Brandon protest, Board member Cindy Stuart then received unanimous board backing to delay or to re-think the plan to remove the longtime, traditional nicknames.

The HCSD had adopted the plan and requested the changes, stating, “The current mascots do not respect every culture and every person in Hillsborough communities. Using Native American images and mascots can easily reduce living human beings to the level of a cartoon, caricature or stereotype. Even when there is not bad intent, these images carry on and spread some of the most painful parts of our country’s great history.” This was the rationale of the HCSD at that time.

Not everyone was pleased by the decision to re-visit the mascot-change mandate. Speaking to the news media following the school board vote June 4 to do just that, the chair of the parent advisory committee, Shannon Durant, commented, “I thought we were moving forward. Now you are telling me that you (the school board) are taking 20 steps backward, and I was waiting to hear the new names.”