Eyes are on area parks for renovations 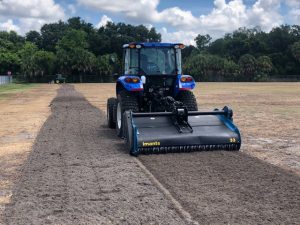 These photos show work in progress at Shimberg Soccer Complex in Tampa. Several ball fields in Hillsborough County will be similarly renovated this summer. HCPR PHOTOS

Lots of athletes have plenty to cheer about this summer as Hillsborough County spends $1.5 million to re-sod 40 of its 214 ball fields. It also plans to add 10 synthetic turf fields.

These include several in eastern Hillsborough County: among them are North Brandon football, Progress Village football, Larry Sanders Sports Complex and Valrico football field. If funded by the Hillsborough County Commission, more fields will be re-sodded in the next two years.

“We had some funds budgeted this year to improve our athletic fields throughout the county, so we sent out several contracts, and World Sports won the contract for re-sodding,” said Greg Brown, park services manager for Hillsborough County Parks and Recreation. “They are diamonds, squares, Little League to senior fields. All of this is re-sodding with Celebration Bermuda grass,” he added. “The whole process will take until middle or late September.” He also explained that while no work has started yet on fields in Brandon and Wimauma, those projects will be getting under way in July. 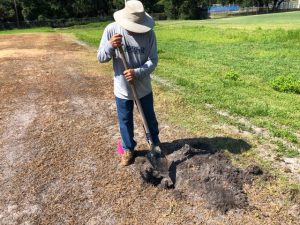 About half of the county’s parks are maintained by the leagues that use them. For instance, FishHawk Sports Complex is maintained by the athletic groups that use those fields. “We maintain the other half, in areas where the leagues can’t afford to do that,” Brown said. “We chose the ones to go ahead and re-sod, based on the amount of use they get and whether or not they are youth dominated. If they are youth dominated, they make it to the top of the list.”

This will be a multi-year process. Funds are expected to be added for the next two years to complete nearly 100 fields altogether. Little League, soccer and football are all big youth sports in Hillsborough County and use most of the athletic fields. “This year, we’re doing 30 diamonds for softball and Little League and about eight rectangles for soccer and football,” added Brown.

Brown described the time-taking process, “First, the contractor must kill all the grass on the fields, and that takes several weeks. The entire irrigation system must be capped off before all the vegetation is tilled. That vegetation then becomes food for the new sod that will be laid, which is coming from Hillsborough County sod farms. After it’s tilled, then they have to laser it and smooth it, put all the irrigation heads back in place, and then they will roll out 42-inch wide sod.” 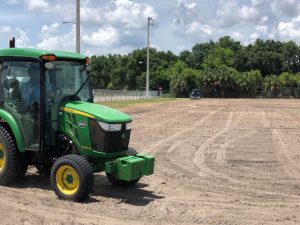 During the recession, the county’s athletic fields did not get all the attention they might otherwise have received, and they are worse for the wear. “Without regular maintenance, it only takes a year or two for the weeds to take over,” Brown said.

The summer work also includes putting out a contract for park maintenance to keep the re-sodded fields in good condition. “We are working on setting up that improved maintenance program,” he said.