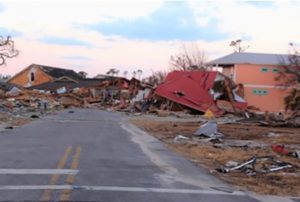 Category 5 Hurricane Michael caused billions of dollars of damage, like this in St. Joe Beach, when it made landfall on Oct. 10.
PHOTO PROVIDED

Hurricane season started June 1, but Manatee County officials have been preparing for a possible storm event since the last season ended on Nov. 30.

Steve Litschauer, chief of the Emergency Management Division of the Manatee County Public Safety Department, said his office operates on a three-level of activation system.

“We have an emergency management person on call 24 hours-a-day, seven days-a-week (monitoring) for any major event,” he said.

On May 31 Manatee County officials held a media event at the county’s Emergency Operations Center, which becomes command central during any major emergency event.

The Emergency Operations Center, or EOC, is located in the Public Safety complex at 2101 47th Terrance E. in Bradenton.

The building houses not only the EOC and the county’s Emergency Management Division but also other public safety offices, such as Emergency Communications (911 operations). 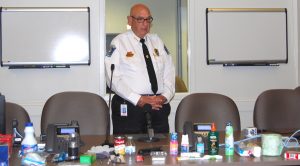 Steve Litschauer, chief of the Emergency Management Division of the Manatee County Public Safety Department since September, has been with county emergency management for 38 years and before that with the sheriff’s office for 8 years.

The building, constructed in July 2007, is built with 12-inch-thick concrete blocks, surrounded by bricks. The building’s skeleton consists of extra-heavy steel girders, and it has windows and doors capable of withstanding more than 200-mph winds, according to published reports.

The Emergency Management Division is responsible for countywide preparedness, response, recovery, and mitigation programs. And during major emergency or disaster events, Emergency Management coordinates all of the other public safety and community groups in the county.

“If we get notified, and in this case we’re going to talk about hurricanes, that something is pending,” Litschauer said, “and the closer it (a hurricane) gets and if we believe through information from the Florida State Division of Emergency Management, the National Hurricane Center, and the National Weather Service that we are anywhere within danger of a storm, we will go to a level two activation.

A level two activation triggers the opening of the EOC, which is a large room with a raised podium stage where the chief or his designate oversees all the other county emergency sector coordinators who are sitting at designated Emergency Support Function (ESF) tables. There are at least 23 ESF positions, such as transportation, communications, public works, firefighting, public health and medical, and law enforcement. 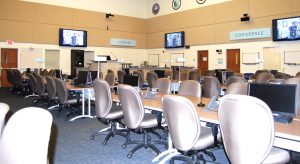 The Emergency Operations Center, a large room in the hurricane-resistant Manatee County Public Safety building, would be activated during an emergency or natural disaster.
CARL MARIO NUDI PHOTO

During a level two activation of the EOC, not all the ESFs, such as recovery and housing, are staffed. “Those types of coordinators would be brought in after a storm or disaster,” Litschauer explained. “At level two we normally work 12 to 18 hour days.” As it (the hurricane) gets closer and closer, we go to a level one, which means all hands on deck.

“It’s every emergency support function,” the chief said, “and normally at a level one (the EOC) is staffed 24 hours a day.” With a level one, the state Division of Emergency Management has determined Florida will be affected negatively by the storm event, which is typically a hurricane.

The state officials will hold a conference call with all 67 counties in the state, along with the National Weather Service National Hurricane Center, to discuss the situation.

Sometime during the process, usually after the county commission has declared a state of emergency, the policy group, made up of the Manatee County Commission chair, the city mayor, the Manatee County sheriff, and the director of the county health department, will meet and set policy, based on the recommendations of the emergency management officials. They decide if and when to activate shelters, whether to order evacuations, if there should be a curfew, and other steps the emergency management team may recommend.

“At level one we begin to put things into action,” Litschauer said. During this time the EOC becomes a beehive of activity. Each ESF coordinator would be receiving reports from his or her people on the streets, then feeding those reports to the chief, who would be in contact with elected officials.

The Manatee County Emergency Management Division emphasizes the importance of having an evacuation plan and a disaster kit ready weeks before a hurricane hits the county.
PHOTO PROVIDED

The EOC would be at level one on a 24-hour basis as the hurricane passes through or near our county until well after it has gone, when additional ESFs come into play. The sheriff’s office and emergency medical division would be out on the road looking for people who need assistance or need rescuing. Then the public works and transportation ESF coordinators will report on flooding and debris blocking roadways, triggering the dispatch of work crews.

“We’re still in charge as long as there’s that declaration of emergency,” Litschauer said. “But, again, it’s a concerted effort. We’re all working together. It’s not one single person.”

Last October Litschauer led a team of Manatee County employees on a trip to the Florida Panhandle to assist in the recovery efforts after the Category 5 Hurricane Michael made landfall on Oct. 10 on Mexico Beach. Thirty-nine deaths were reported, along with damage in the multi-billions of dollars.

Litschauer said he came back to Manatee County with at least two lessons learned. “When there’s a loss of power, a loss of the internet, the loss of all of that — how do we communicate?” was one of the lessons. “How do we get a message out to the general public when there’s no TV, no radio, no print paper? We just go back to printed flyers like they did in the old days. And word of mouth, that was a big thing,” he explained.

The other lesson he learned from his experience in the Panhandle was more important. “The biggest thing is people having a plan and knowing when not to evacuate,” Litschauer said. “Because in Hurricane Michael, where it went from nothing to a Category 5 in three days, people didn’t have time to then decide what they needed to put in a kit, what they needed to take with them, or where they were going to go.”

The chief stressed the importance of residents being prepared before a hurricane forms. “It doesn’t matter how many (are predicted),” Litschauer said. “It only takes one.”

Another thing he said that impressed him about the recovery after Hurricane Michael was how everyone was helping each other. “We want the public to know it takes the community,” Litschauer said. “It’s not just Emergency Management; it’s just not the government, but it’s the entire community.” Not only is it “all facets of government, and . . . the nonprofits, like the Red Cross and Salvation Army,” he said, “but it takes the citizens working together, helping one another to get through it.”

For information on preparing for a hurricane, visit the Manatee County Emergency Management website at www.mymanatee.org/departments/public_safety/emergency_management/__manatee_ready__emergency_planning. Information is also available on the Manatee County Facebook, Twitter and Instagram pages. The Citizen’s Information Center phone number is 941-749-3547.