50 years doing what he loves

Veterinarian Hal Ott celebrates 50 years in the profession he loves 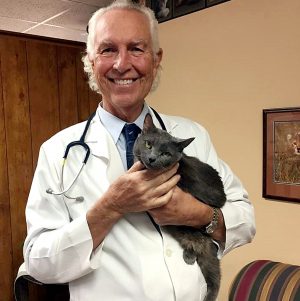 Veterinarian Hal Ott, 75, is celebrating 50 years caring for those who can’t speak and advocate for themselves. “He’s got a good heart; he cares for both people and animals,” said longtime friend, Priscilla Mixon. “He treats every animal the same and gives each one the same respect as he would a person.” LOIS KINDLE PHOTO

Sometimes, the simplest of choices has the most monumental impact on our lives. Such was the case of high schooler Hal Ott, whose parents moved from Pittsburgh to Pompano Beach when he was 16.

Needing an elective to graduate, he randomly chose a class in agriculture, which sparked a passion in him that has lasted a lifetime. “I absolutely loved it,” he said. “I had my own steer, hogs, chickens and rabbits and walked away with numerous awards.”

Unaware at the time of where this newfound interest would take him, Ott went on to the University of Florida. There he discovered the same love for science as he had for animals, which led him to apply to the Auburn University College of Veterinary Medicine, where he was accepted.

Ott graduated in 1969 and was offered a job as a veterinarian for horses on a race-track farm in Ocala. Although he was tempted, the job required lots of travel, and he had a wife and 2-year-old son to consider at the time. 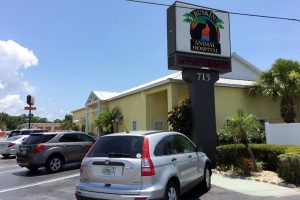 The Ruskin Animal Hospital, 715 U.S. 41 S, Ruskin, was founded by veterinarian Hal Ott in 1971. At that time, he was assisted only by a part-time receptionist. Today the practice Includes 25 employees, including three veterinarians. Ott works part-time in the Cat Thyroid Center.

So he opted to join the Air Force as a captain and was stationed at MacDill AFB for two years. “My mission was to care for Sentry dogs, the pets of base personnel and, primarily, to inspect thousands of pounds of shrimp procured by the Army,” Ott said. “I gained 35 pounds making sure the shrimp tasted no less than ideal for our service people.”

Starting a career in South Shore

Discharged in 1971, Ott decided to open a small animal veterinary clinic. “Hillsborough County seemed as good a place as any,” he said. So he looked at the county’s population map, plotted the location of every veterinary practice on it and discovered Ruskin had no veterinarians. “I figured there were likely enough people there to support a practice,” the young veterinarian said at the time.

Through Dickman Realty, Ott leased the former Spade Engineering building, made a few changes and hired a part-time high school student as his receptionist. The “cash register” was his father’s old cigar box.

“The first day I grossed $17, and it took many months until I had my first $100 day,” he said, noting he sometimes bartered for payment in the form of chickens, pigs or produce. “Thankfully, I managed to earn enough money to support my wife and two children.” 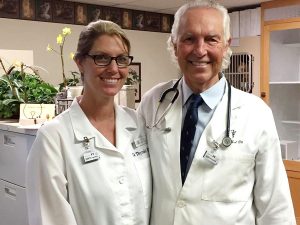 Practice manager, Diane Cooper, pauses for a photo with her father, veterinarian Hal Ott, at the Cat Thyroid Center in Ruskin. She has worked with him for the past 16 years.
lois kindle photos

Ott recalls being a veterinarian in Ruskin, then a farming community, was much different from what it is today. There were no specialty vets like there are now.

“My patients were dogs and cats who lived a lot of time outdoors,” he said. “They were hunting dogs, guard dogs and working animals. The cats were ratters.

“I treated goats, rabbits, birds, snakes, even a circus monkey,” he added. “If an animal could be brought through the door, I’d treat it.”

As a result, Ott saw lots of dogs with heartworms and flea- and tick-infested dogs and cats. He also treated animals with snakebites, gastrointestinal issues and intestinal parasites and many that had been hit by cars or wounded by gunshots or arrows.

“I was busy 24/7, as we didn’t have after-hours emergency clinics,” he said. “It was not unusual to get home after a 10- to 12-hour day, only to have the phone ring from a panic-stricken owner whose dog needed immediate care.”

Ott regularly visited area fish farms to write health certificates for fish being transported across the country. During the carnival off-season, he treated black bears and big cats in Wimauma and Gibsonton and, even, a gorilla that needed its health certified before being sent to Cuba.

Fast forward to the present 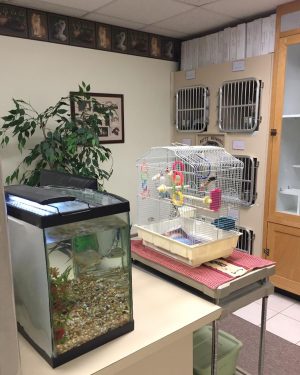 The Cat Thyroid Center at the Ruskin Animal Hospital typifies veterinarian Hal Ott’s thoughtful consideration for animals. In addition to the crates its cats must stay in after treatment, the room includes comfy couches and a fish tank and bird to keep the felines engaged.

The dogs and cats they see now are house pets who have become family members to most people. “Gone are the days of giving daily heartworm pills and dipping and spraying our dogs for fleas,” Ott said. “A monthly flavored tablet or small amount of liquid applied to the skin does a much better job.”

Today’s veterinarians treat new problems, like diabetes, obesity and chronic/obsessive disorders, he said. Even Lyme disease, once seen only in the northeastern part of the country, is now here in Florida.

In 1998, Ott became licensed to treat cats with hyperthyroid disease with a radioactive material called I-131. He is one of only seven veterinarians licensed in the state to do so. “This disease didn’t exist anywhere in the United States when I opened my practice in 1971,” he said. “Now I treat 250 cats a year, referred to the Cat Thyroid Center from across Florida, out of state and, even outside (the country).”

Despite how times have changed his profession, Ott still enjoys the career he chose.“What hasn’t changed is my love for animals, their owners and the environment,” he said.

Ott said he began his career to help those who could not speak or advocate for themselves. “About midstream my energy and focus broadened,” he said.

He was instrumental in the founding of Mary & Martha House, traveled to Haiti with a missionary group to provide stoves, food and education for the country’s poor children and is now involved in micro-financing small, rural co-op, sustainable farms.

“I became an ambassador member of the Carter Center, which wages peace, fights disease and builds hope across our world,” Ott said. He also has helped out Southeast Guide Dogs, Smile Train and the World Resource Center.

In 2003, Ott founded the Critter Adoption and Rescue Effort no-kill animal shelter, serving served 10 years as its medical director and six as its board president. He also founded and still maintains Ott’s Off-Leash Dog Sanctuary in Ruskin.

“One thing I have learned, perhaps more than anything else, is that the more one gives from the heart, the more one receives,” Ott said. “Today more than ever the world needs kindness, love and generosity. We need to open our arms and our hearts.”

Now 75, Ott has set no retirement date. In 2013, he moved to Palmetto to downsize, purchasing and renovating a home built in 1910. “My most precious legacy is my four fantastic children and eight grandchildren,” he said. “I’ve had a very rewarding career. Even if I could do it all over, I wouldn’t change a thing.