Community comes together to honor one of the fallen 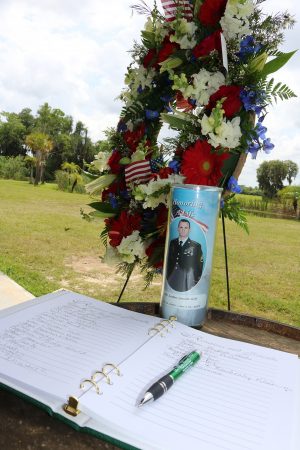 The community came together May 4 to mourn the loss of Ruskin native and Sgt. 1st Class Justin Lowell Goff — those close to him called him “Redbeard.” Goff, 29, was a soldier with the U.S. Army Special Operations Command at Fort Bragg. He died on Easter Sunday, April 21, in a parachuting accident.

He is survived by his wife Stephanie and three children: Sydney, 9, Savannah, 7, and Jameson, 4; his mother, Melinda Klein, and many other family members and friends.

Goff was a paratrooper with a Class D skydiving license, meaning he has made more than 500 jumps. He was also active in his community, coaching rugby and gymnastics at his daughter’s gym. He enjoyed MMA fighting and had a zest for life and adventure. He will be greatly missed. Goff joined the Army in August 2007 and was a graduate of East Bay High School.

When the word was out of the tragedy, friends and family swung into action to set up a memorial service in Justin’s home town of Ruskin. His cousin, Donna Gabriel, called Mission BBQ in Brandon to see if they could help. She had no idea the lengths the restaurant ­— known for its patriotism — would go to.

“When Donna called me, I said ‘I’m doing it all!’” said Crystal Haytasingh, Community Ambassador for the Brandon location. “It’s one way we can support the military community.”

The restaurant fully catered the event, including paper goods and beverages.

Leann Leslie secured a location with neighbors Steve and Chere Simmons to use their South House barn; and Roman Rodriguez of Bulldog’s Bounce House supplied extra tables, chairs and tents. 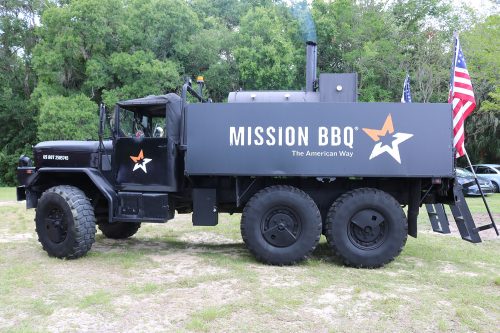 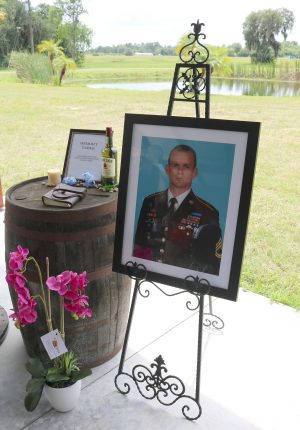 Sgt. 1st Class Justin Lowell Goff passed away on Easter Sunday, April 21. An hometown memorial was held at the South House in Ruskin. 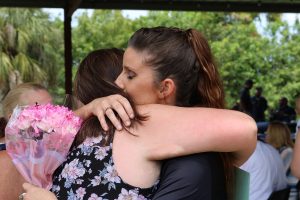 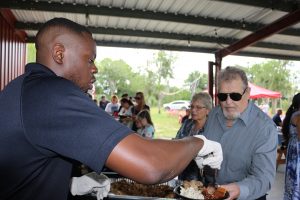 Mission BBQ not only catered the memorial event for Justin Goff but also provided a full staff to serve and clean up. Here Jesse Brown is serving barbecued pork to Ron Stogner. 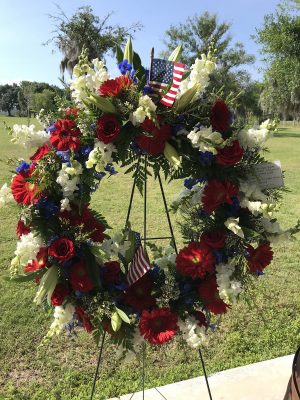 This patriotic wreath was sent by Bay Area Urology.