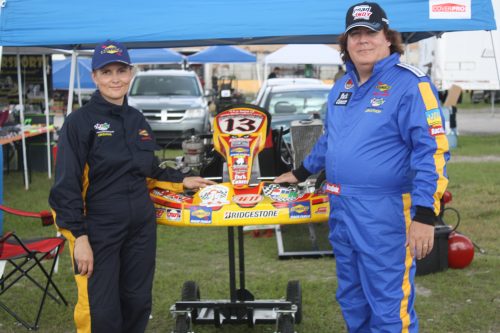 Oksana Shavaryn-Sharkey, originally from Ukraine, and her husband Jonathon Tepes Sharkey, above, originally from New Jersey, now reside in Ruskin. They are raising funds for their racing in the Indy Series and in Europe as well as in the Tampa Bay area. See AURacing@yahoo.com and GoFundMe.com/100-disabled-american-veteran-racer.

One is a 55-year-old, partially-disabled male US Army veteran from a large town in New Jersey. The other is a 37-year-old female R.N. (registered nurse) from a small village in Ukraine, a country located near Russia and formerly part of the Soviet Union.

Like two ships in the foggy global night, these two disparate human beings have found a positive life in common in Ruskin, Florida. That serendipitous life revolves around their marriage and home here in South Shore and a shared exuberance and passion for race car driving and competition. Plus, the pair is promoting cancer awareness around the world and raising money for a state-of-the-art cancer center in Ternopil, Ukraine.

In a general sense, the yin in this relationship is Oksana Shavaryn-Sharkey. The yang component of this symbiotic dualism is her husband, Jonathon Tepes Sharkey.

Married going on three years, the couple met at the Moffit Cancer Center in Tampa in June 2014, where Oksana was a nurse for Danielle, Jonathon’s oldest daughter (from a previous marriage), who was suffering with acute lymphoblastic leukemia with the Philadelphia chromosome. Jonathon and Oksana married in October 2016, and, as they say, the rest is history. Their individual histories, of course, started well before that, and now that the pair is conjoined, they are creating more history, both individually and together. 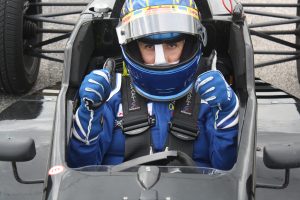 Oksana Shavaryn-Sharkey, above, started racing in a rental kart at Andersen in Palmetto, and now aspires to become the only Soviet-born female to race in a major American racing series.

Jonathon, upon completion of high school in Elizabeth, New Jersey, enlisted in the Army and started his basic training in 1981 at Fort Sill, Oklahoma, when the Cold War with the USSR was still warm but in its waning days, thanks to former President Reagan. Jonathon served with The Big Red One at Fort Riley, Kansas. The stress and strain on his body have left him a 100% disabled Army veteran. “I have undergone 23 knee operations, including total knee replacement on the left knee and a robotic knee joint replacement on my right knee,’ said Jonathon, who is medically retired.

Jonathon started a lifelong infatuation with racing when he was 5 years old, racing karts. After military service he returned to racing in 1992 in Formula VEE. “I have either raced or tested in Formula Vee, F-440, Formula Ford, Stock Cars, Cart/indy Cart, Midgets, GT3 Endurance and Sorts Cars,” said Jonathon, who has a wide range of experience in karting. A Dale Earnhardt Sr. aficionado, Jonathon is prone to wearing the iconic black hat while racing and off the tracks.

Now, he says, “My goal is to become the first disabled American veteran to race in the Indy 500 and/or the 24 Hours of Le Mans,” acknowledging that he needs financial help to accomplish one or both of these aspirations.

His wife Oksana, who was born in Romanove Selo, Ukraine, studied English and received a degree as an RN in Ukraine, where she worked as a nurse for about 50 cents an hour. The miraculous impetus for Oksana’s coming to America and meeting Jonathon, working at Moffit and igniting her racing career was her winning an American Visa Lottery, which brought Oksana to the US in late 2011. Upon arriving here, Oksana worked as an in-home caregiver while studying for and receiving her CNA (certified nursing assistant) license and working at different Tampa Bay hospitals, including Moffit. She received her RN license in Florida in December 2015 and continued working at Moffit, but the commute from South Shore is too time consuming and rigorous, even for a race car driver, so she is presently looking for work in the healthcare industry in the South Shore area.

She began her racing career in March 2017 at Andersen RacePark in Palmetto, FL. Ironically, as Jonathon now points out, “Oksana, as a nurse, usually treats people who are in a bad way, and now she is on the race track, risking harm or injury to herself.” Jonathon goes on to say they have different personas on the track. “I attack the track,” he said. “Oksana lets the race come to her!”

“They are great folks,” said Matt Barnebey, the race director at Andersen. “ We have very high expectations for both of them.” As they do for themselves. 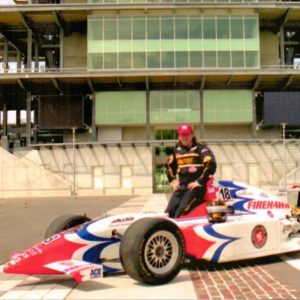 In the meantime, both Oksuna and Jonathon are burning the rubber on area tracks with aspirations for bigger and better things – not only on the asphalt but also with an international video documentary chronicling Oksuna’s rise to fame and success as the so-called “Racing Queen of Ukraine.” Oksana is now seeking support on the crowdfunding platform of Indiegogo for her upcoming documentary that she hopes will inspire generations to come. In fact, Jonathon and Oksana just received confirmation that a Russian video crew will be coming to Tampa Bay to produce the “Oksana Story,” which will be shown in Ukraine and Russia, as well as at a film festival in Tampa in late August.

Oksana wants to race at the 24 Hours of Le Mans in France, as well as raise money for a cancer treatment center in her home country of Ukraine. Supporters from South Shore and around the world can help Oksana by donating and pledging in this campaign. Everyone who donates at least $25 will receive a DVD copy of this documentary. Go to https://www.indiegogo.com/projects/oksana-the-racing-queen-of-ukraine#/.

In Oksana’s words, “Who dares, wins.”