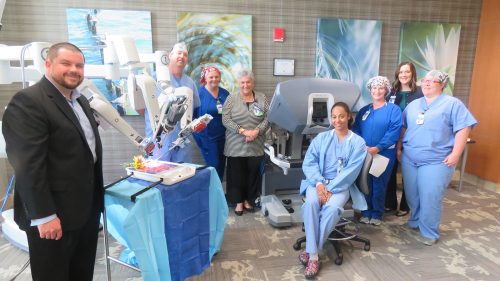 South Bay Hospital’s Open House on April 30 hosted a steady stream of visitors, anxious to get behind the controls of the hospital’s new surgical robot and talk with surgical experts about the precision and enhanced visualization of robotic surgery. This type of community involvement contributes to building the important trust factor between patient and doctor.

Most visitors agreed that it was one thing to talk about this technology but a totally different thing to actually see the wonder of how it works. Among the visitors was a retired surgeon who found robotic surgery fascinating, as he reminisced about surgery during his career, comparing the methods of yesterday to those of today.

“I am so very pleased with the turnout for our Robotic Surgery Open House event today. We saw more than 165 visitors learn about robotics through real-time, hands-on demonstration. It was a great opportunity for our community at large to see what our team does every day to care for our patients. South Bay Hospital offers world-class services and technology close to home, and we appreciate everyone’s continued support and patronage. We are proud to be a member of the community since 1982, making medical services fast, convenient and accessible through our emergency squad and local EMS teams. We look forward to offering more services like this in the future to the residents of Sun City Center and the surrounding communities,” said CEO Daniel Bender.

Doug Mehnert, the local clinical sales representative for Intuitive Surgical, which supplied the DaVinci Si Surgical System, was on hand at the open house to explain the robotic system, which is used for laparoscopic surgery, generally soft tissue surgeries from the neck to hip level. With unbelievable accuracy, surgeons can perform complex and detailed, minimally invasive surgeries through minor incisions. Patients, therefore, benefit from smaller incisions, reduced scarring and faster recovery.

The robot was delivered late in 2018, and the following months were used for training. It was used for two surgeries in April, and several are now scheduled for May. The first surgery was performed by Dr. Ronald Delgado, who has been practicing at South Bay for 11 years and also has privileges at Brandon Hospital and Tampa General Hospital.

According to Alyssa Tobitt, Vice President—Operations, the robot is part of South Bay’s current program to renovate and upgrade its four operating suites, day surgery unit and Post Anesthesia Care Unit (PACU). The project is expected to be complete by the end of this year.

Open house visitors were given the opportunity to join employees in offering suggestions for naming the robot. The winner receives a South Bay Hospital cooler bag and umbrella and will be contacted by phone after the person’s name is announced on the hospital’s Facebook page, sometime during the week of May 6.