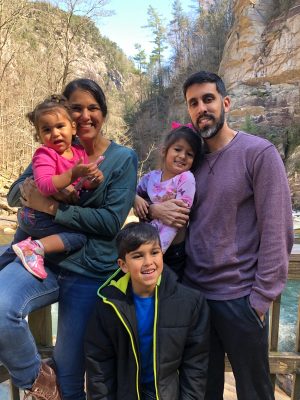 Philip Rivera, a teacher at Lennard HIgh School ­— now a published author — is pictured with his wife Yarei and their three children.

Philip Rivera is the most incongruous Connecticut Yankee you will ever encounter. But Rivera’s penchant for writing, his wit and his humor bear a strong resemblance to the author Mark Twain, who created the Connecticut character in one of his books.

Rivera is a migrant resource teacher in his day job at Lennard High School in Ruskin. His non-day job? Well, that’s another story and another adventure. And it is all based on Rivera’s unique Hispanic background and persona as your not-so-typical suburban breadwinner, father, husband, and author — self-published author at that.

Go back about 42 years. That’s when Philip Rivera was born in Hartford, Connecticut. His mother was originally from Cuba, and his father was from Ecuador, thus the bilingual skills and Latino affinity from an early age. Rivera’s dad was a chemical engineer, so when Rivera was four years old, the family moved to Mexico City where his father had a job with Ashland Chemical, a multinational company producing car parts. Eight years later, Rivera moved to Florida”just in time to start the seventh grade.”

“I’ve been here (Florida) ever since,” (with a few minor, brief, purposeful interruptions along the way), Rivera says with no regrets, “living the last six years of my ‘married with children’ life in nearby Riverview.”

Prior to his work at Lennard High, Rivera graduated from Bloomingdale High School in Valrico and studied International Studies at USF. After graduating from USF, Rivera worked with a dropout prevention program, funded by the Hispanic Services Council in Tampa.

Then it was on to Tulsa, Oklahoma, where he earned a Masters in Divinity degree from Oral Roberts University. During his stint in Tulsa, Rivera worked with the Hispanic outreach program of the Boy Scouts of America, as a youth pastor, and as a prevention education teacher. Rivera finally moved back to Florida in 2006 and started working as a teacher in Hillsborough County, where he is to this day. 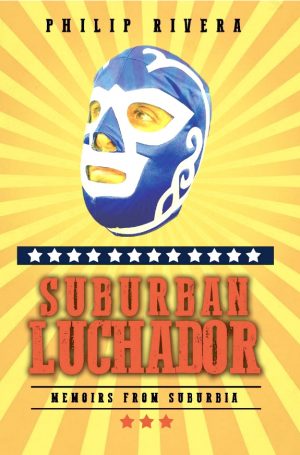 Philip Rivera’s humorous look at everyday life can be purchased at Amazon.com.

Rivera recently wrote and published a humorous memoir about his life as a dad, a husband and teacher in the South Shore area.

Rivera says, “I self-published my book, titled Suburban Luchador: Tales From The Burb Side, a collection of humorous stories about life with lawnmowers, minivans, bathtub explosions and whimsical wives.”

He readily admits he self-published on Amazon after “much trial and error, research and learning.

“As a self-published author, I must be the writer, the marketer and the publicist,” he said with a slight feeling of being overwhelmed but a huge feeling of self-satisfaction.

For the uninitiated, the word “luchador” is Spanish for “wrestler” and refers to the guys in the ring who don flamboyant, colorful costumes and masks, provoking good and evil alliances from the fans at ringside and on TV. Depending on this ring-persona, the crowd relates to the wrestler with cheers and positive feedback or with boos and hisses.

“If you are looking for a book that takes daily activities — like kids in bathtubs, martial video game challenges, trips to the junkyard — and mixes them with a dose of comical imagination, then you are going to enjoy my book,” suggested Rivera drolly.

“My hope is that my stories highlight the wonder and humor that exist in the world that God created around us, if we choose to see it,” said Rivera, who is currently working on another Suburban Luchador spin-off. “Unfortunately, we live in a world where wonder has been demystified. Dragons and castles are reduced from larger-than-life creations to images on a screen or on toys to be put away. Minivans and riding lawn mowers become boring tools of everyday suburban life instead of action vehicles, featured on the yet-to-be-made The Fast and The Furious: Suburbia Drift. However, I propose that deep inside us are storytellers who long to bring that adventure and imagination back into our 9 to 5 mini-vans-and-mortgages world. I believe God planted in each of us a unique perspective that belongs only to us and, ultimately, exists to display His creativity.” Rivera, perforce quite practical in his role as a teacher, is also imaginative and subjective in his dealings with his high school mentees. Rivera says he likes to describe himself as a grown-up version of Calvin, from Calvin and Hobbes, who got married, bought a mini-van, moved to the suburbs, had kids, and started writing about his adventures as a suburban “luchador.”

If you are in his neighborhood, you may see him mowing the lawn while wearing a luchador mask for inspiration, his body begrudgingly cutting row after row of grass and his brain feverishly conjuring up another prosaic delight for his readers.

Rivera is also dedicated to his work and to his students at Lennard. “I’ve been here (Lennard) for five years and in Hillsborough County for 11 years. This gives me the opportunity to work with migrant students in several capacities: tutoring, mentoring, career decision making and goal setting.

“I’ve learned a lot from these hard-working students and their families over the years, and I’ve also had some humorous conversations, which also inspire some of my stories,” said Rivera.

His stories are mostly true, except when the line between mundane and magical is blurred. “I hope the journey (of reading) brings you some laughs and God some glory,” commented Rivera, a Ralph Macchio lookalike and suburbia’s favorite underdog.