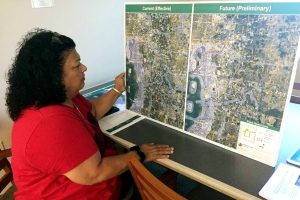 Nilda Mercado, of Ruskin, takes a look at FEMA’s current and proposed coastal flood maps for Hillsborough County while waiting to speak with a Hazard Mitigation Section representative at the SouthShore Regional Library May 4.
LOIS KINDLE PHOTO

For the first time in nearly three decades, the Federal Emergency Management Agency (FEMA) has updated flood maps for the coastal areas of Hillsborough County, which include structures built generally west of Interstate 75 in South Shore and near the Alafia and Little Manatee rivers.

The flood maps proposed by FEMA will be used by insurance companies to assess flood risks when determining rates for flood insurance and as a factor in building and loan requirements.

“Everybody is in a flood zone, whether it’s low, moderate or high risk,” he said. “What’s most important is for people to know is what these changes are and if they’re affected.”

Many areas along the coast could be rated as higher flood risks than before. Although many properties in them were previously listed as at risk for flooding on the old maps, they’re now shown at even greater risk and could potentially face up to three additional feet of flooding.

In South Shore, Ruskin and Apollo Beach are most vulnerable.

MiraBay residents Tim Adkins and his wife, Bev, didn’t know what to expect when they stopped by the SouthShore Regional Library May 4 to look at the proposed. They were pleasantly surprised.

“The new map is better for us,” Adkins said.” It takes from an AE zone to an X. Due to our mortgage, we’ll still be buying flood insurance, but our premium will be lower.”

Henry said there are about 60,000 structures in the county that will be affected by the proposed changes. 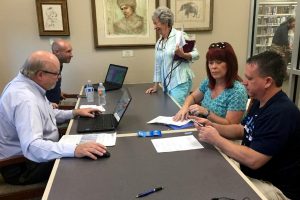 “About 10,000 will be newly placed into a flood zone, and most of the remaining 50,000 will be affected by elevation changes,” he said. “Because of the technology used, the new maps are much more accurate. They’re updated through new modeling to better show the risks.”

The new Flood Insurance Rate Maps or FIRMS will become effective in the spring or summer next year, Henry said.

If you think your home or business is incorrectly assessed as high risk, there is an appeals process called a Letter of Map Amendment (LOMA). You can request a LOMA from FEMA if your property is in a high-risk area but your primary structure and all attached areas, including screen enclosures and garages, are built on naturally high ground. For information, visit www.fema.gov/letter-map-changes.

To view the FEMA flood map changes in Hillsborough County, visit https://bit.ly/307b9n4. Click on the Coastal Flood Risk Update on the left of the page, and then click on the FEMA Coastal Flood Map Viewer. Read the instructions and then proceed. If you run into problems, call FEMA’s Map Assistance Center at 877-336-2627.