On May 2 more than 100 interested people attended an open house presentation about the proposed 10th Avenue West Complete Street Project. 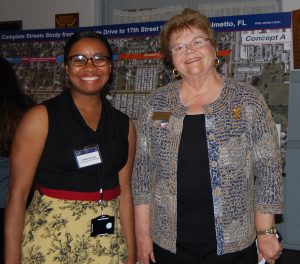 During the open house held at the Women’s Club of Palmetto, 910 Sixth St. W., community members had the opportunity to view proposed ideas for the project study area along 10th Avenue West from Riverside Drive to 17th Street West. Florida Department of Transportation (FDOT) District 1 staff and consultants were on hand to answer questions on the proposals and feasibility study. “This project has been in the planning for two years,” said Jennifer Marshall, FDOT District 1 project development manager and manager for the 10th Avenue West Complete Street project feasibility study. “We’re finishing up the feasibility study and the next step is design.”

The study evaluates the viability of the proposed improvements, such as narrower travel lanes, wider sidewalks, bicycle lanes, enhanced transit stops, reconfigured on-street parking, traffic calming measures, and storm water control features. FDOT has adopted a policy of promoting the Complete Streets program. A Complete Streets policy refers to the idea that roads in the state are not exclusively for motorized vehicles. 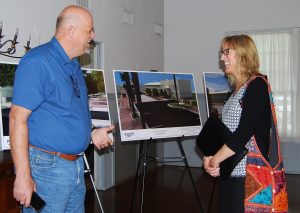 According to the state agency website, the Complete Streets program was developed to “improve safety, support economic development and create quality places through integrated land use and transportation.” The program promotes a more pedestrian- and bicycle-friendly street. “The department is dedicated to create safe streets, designed for all transportation modes,” said Deborah Chesna, FDOT District 1 Complete Streets/Growth Management coordinator.

Palmetto Mayor Shirley Groover Bryant was thrilled to see the number of people who came out between 5 p.m. and 7 p.m. for the open house event to check out the proposals and give their opinions. “This takes the community one more step closer to the reality,” Bryant said. “This is another opportunity for the community to give its input.”

FDOT held two other informational events in June and November 2017 to gather ideas of what the community would like to see along 10th Avenue West.Armed with the community’s suggestions from those two meetings, the project team came up with general plans. Several sections were identified along the approximate 1.5 miles of the wide roadway.

The southern-most section on two aerial map posters of 10th Avenue West at the open house was labeled the Downtown Business Core; going north the roadway narrowed into the Library Plaza section, moving into the next block for the Lamb and Sutton parks section and then the midtown business area, before ending in the Uptown Residential Area where the Palmetto Mobile Home Club straddles the roadway. 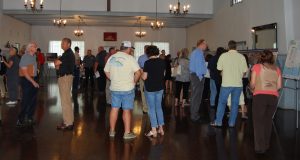 More than 100 people attended the Florida Department of Transportation open house, May 2 between 5 p.m. and 7 p.m. at the Women’s Club of Palmetto, to see the proposed improvements for the 10th Avenue West Complete Street project.
CARL MARIO NUDI PHOTOS

Jerry Donley, president of Palmetto Mobile Home Club, had some questions while he looked at the renderings and maps lining the walls. There were two cross-section posters, one labeled Concept A and the other Concept B, showing the width of the roadway with and without a median and shared-use pathway. Concept B provided a 10-foot-wide shared use path on one side of the road in the Uptown Residential Area. According to the open house literature FDOT provided, “the shared use path has many recreation and safety benefits. However, the inclusion of the path will reduce the space available for a raised median in the area.” The raised median would promote slower speeds and areas for landscaping.

Donley questioned if the plans allowed for access across the medians from the mobile home park’s side streets. The informational sheet explained how the median option would restrict access from some driveways and side streets, but a median flush with the road, using stone or brick treatments, could be considered. “It’s a marvelous project,” Donley said. “It’s to beautify the city and make traffic flow better.” With the combination of bike lanes and the shared-use path, he thought the plan would “make it pedestrian and bike friendly.” He said he would be interested in riding his bike or walking to the activity centers on the southern part of the street.

Sheron[sic] Bundy, manager of First United Methodist Church of Palmetto’s Palmetto Village Thrift store, 333 10th Ave. W., also shared some concerns. “The beautification of 10th is a great idea,” Bundy said, “but it can’t be detrimental to the residents and businesses already there. Putting up palm trees and widening the sidewalks is great, but I’m concerned about the driveway access to our parking lot.”

Later during the open house, Bundy spoke with members of the FDOT project team and got some answers. “All the renderings I looked at had curbing and was cutting off our ingress and egress,” she said. “The job supervisor I spoke with assured us they would look at it. The driveway is important to us, but they were good listeners.”

Palmetto resident Brett Pollock was not sure if the improvements would fix a major traffic problem. During rush hour the traffic going south across the Green Bridge over the Manatee River into Bradenton along Eighth Avenue West backs up several blocks through the main business district of Palmetto. “I’m concerned about the traffic building up (along 10th Avenue West) because people are trying to get off Eighth Avenue (West),” Pollock said. “I don’t know if it will solve the problem.” 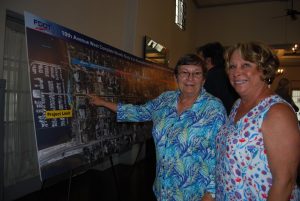 Parking was another issue the plan would have to tackle. The proposed improvements will reconfigure the existing on-street parking along 10th Avenue West, without reducing the total number of parking spaces now available. City officials were hoping the Complete Street project would promote more development in the two defined business areas. To facilitate the possible development, the Palmetto Community Redevelopment Agency, or CRA, has purchased property in the 400 block of 10th Avenue West for a parking structure and retail stores.

A new Palmetto Police Department building also will be built in the 800 block of 10th Avenue West, possibly stimulating more development. “We purchased the old Slicks Garage to create a parking structure for downtown but have to work on parking to the north,” said CRA Director Jeff Burton. But Burton was sure these problems could be solved. “Every project is multi-year, and anytime you have FDOT in Palmetto talking about our vision, that’s exciting,” he said. “We still have parking and financing to work out.

FDOT project manager Marshall said funding for the design phase, which will begin this summer and will cost about $130,000, was secured, but money for construction has not yet been identified. Mayor Bryant was hopeful that some of the funding would come from FDOT, and some from the Southwest Florida Water Management District for the flood mitigation portions of the project.“And, hopefully, we’ll have some grants for the safety features,” she said.

Even with the question of funding still to be determined, Burton was pleased with the turnout at the open house. “Having the public engaged is always good, whether it’s positive or critical,” he said. “This is whom we’re building it for.”

For more information or to comment on the project, contact Jennifer Marshall with FDOT at jennifer.marshall@dot.state.fl.us. The official comment period for the meeting ends May 13. After that date, comments will not be a part of the official meeting record.