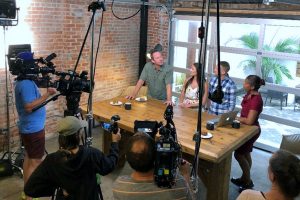 Mika and Brian Kleinschmidt, of Riverview, are the hosts of a new HGTV show, called 90 Day Dream Home. Above, clients purchasing the new home are about to see its blueprints in a scene from the show. Its premiere will be aired nationwide at 10 p.m., EST, April 27. COURTESY PHOTOS

Brian Kleinschmidt has always been full of ideas. Willing to think out of the box and try something new. Even as a child, he drew cartoons, illustrating his assorted ideas and inventions. According to his parents, his mind never stops.

In only 37 years, he’s already had a lifetime of experiences, and now he’s about to embark on his latest adventure with his wife Mika, who’s every bit his match.

At 10 p.m. April 27, the couple will kick off a new HGTV series, called 90 Day Dream Home, a concept they imagined, pitched and will now host nationwide.

“It’s exciting to finally be able to announce it to the world,” Brian said. “We pitched it to HGTV two years ago on my birthday, and it’s going to debut after Love It or List It, the network’s top-rated show.”

Each one-hour episode of 90 Day Dream Home covers the complete construction of a new home, from its initial concept to the big reveal. The Kleinschmidts are involved every step of the way.

Mika takes prospective buyers around to several empty lots to narrow down a location and to three or four homes to learn what features and layout they want. She works side by side with the clients as they’re selecting interior finishes for the home.

Brian is the project manager, supervising every detail of construction. “I think it’s going to be very interesting to viewers to see the full process of home building, from beginning to end,” Brian said.

How they got started

About four years ago, the couple sold one of their three Anytime Fitness franchises and used the proceeds to partner with a local builder to construct a new home. At the time, other investors were buying and flipping homes in 60 to 90 days. 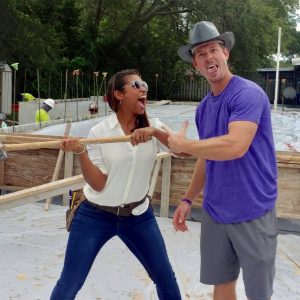 Mika Kleinschmidt shows her husband Brian that she can also swing a sledgehammer during the shooting of an episode of 90 Day Dream Home.

Brian had been through that venture before. “When I lived in downtown Nashville, more than a dozen years ago, I was buying and flipping homes, but then the recession hit, and I couldn’t even dump them,” he said. “I lost everything.”

Although he felt defeated at the time, the bug for real estate stayed with him. “I always wanted to get back into (it), and building new homes was a kind of redemption for that period in my life,” he said.

Over time, the Kleinschmidts began working with several builders, and Mika, a licensed real estate agent with Imperio Real Estate in St. Petersburg, sold the homes upon completion.

Both are regular HGTV viewers. They recognized the network’s plethora of shows on flipping homes and thought it would be unique to have a show on new construction. They decided to pitch what they were doing.

Their first concept was rejected, but Brian, who has always taken “no” as a “not yet,” was undeterred. He and Mika came up with a second pitch. 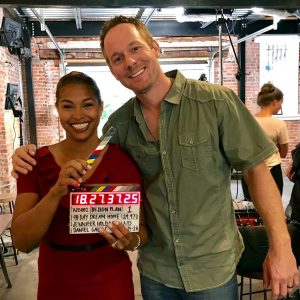 Mika and Brian Kleinschmidt, of Riverview, are the hosts of a new HGTV show called 90 Day Dream Home. Its premiere will be aired nationwide at 10 p.m., EST, April 27.

“They loved us, and they loved the concept,” Brian said. “We did several Skype interviews, and then the HGTV production company came to do a sizzle reel (a four-minute mini episode).

It was shot over two days and shown to the network executives, who gave the couple the thumbs up for a pilot.

“This is the first HGTV show in Florida, and we’re so excited about putting Tampa on the map in our national broadcast,” Mika said. “All of the homes on the show will be built in the Tampa Bay area.”

Brian’s mom Ellen is undoubtedly a fan. “I’ve always been amazed at the way my son looks at life,” the Sun City Center resident said. “His positive outlook, boundless energy, passion and ambition are infectious.

“He and Mika are the perfect team,” she continued. “They’re both dreamers and doers. They put their time and talents, their hearts and souls in everything they set out to do, and 90 Day Dream Home is no exception.” 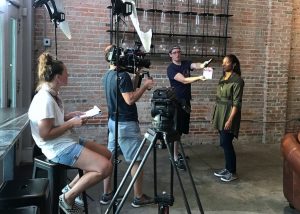 Mika Kleinschmidt, right, preps for a design meeting during an on-the-fly interview for 90 Day Dream Home.