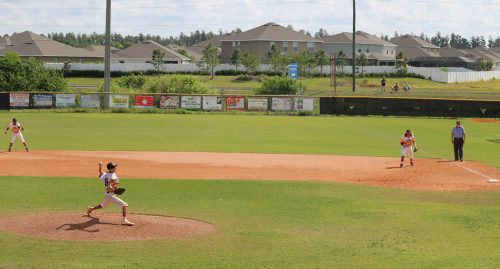 Lennard senior southpaw Cameron Lassalle, #9 above, came in early to save the Strawberry Crest game for winning pitcher Randy Tavarez. Lassalle leads Lennard pitchers in appearances with 8 games. He has a 3-0 record, 1 save and a 2.16 era. STEVE JACKSON PHOTO

A disappointing loss to Riverview did not diminish last week’s two wins, a rout and a nail-biter, for coach Kennedy Duran’s Lennard Longhorn’s diamond crew. Now, 13-3 overall and 6-0 in District 9, the rampaging Horns end district play this week, prior to two more games at home. The team will then close the chapter on regular season play with two games on the road before the playoffs start.

Last week started well for the Longhorns as they traveled to Riverview and put a 7 spot on the board in the top of the third inning and held a 9-1 lead after four and a half innings. Then the Sharks erupted for 10 runs in the bottom of the fifth. The crazy see-saw non-district battle was not over, however. Lennard, trailing 11-9, rallied for 2 runs in the sixth, only to see the jubilant Sharks scratch out a seventh inning walk-off run for the 12-11 win. The loss was tough, but the Longhorns’ response was even tougher. 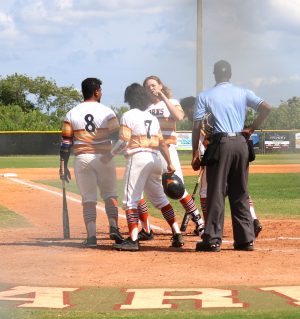 Lennard coach Duran took it to his players in the team’s Wednesday practice, forgoing the usual “light work in shorts” practice, for a full dress, dress-down where he challenged his team to answer the Riverview catastrophic loss by finishing the week strong.

“I 100% challenged them on Wednesday after that Riverview game to come out, practice hard. Our senior leadership, especially Edward Tarrant and Yoyo (Nunez), led the way in a great practice,” Duran said. “Then we came out and had a great game, bombing Braden River in our district, and against Strawberry Crest our players showed what they are made of. I couldn’t be prouder.”

Lennard cruised to an easy victory over District 9 foe and reigning champ Braden River, 12-1, on Thursday, April 11, as Lennard tallied 6 runs in the sixth inning. Longhorns batters contributing to the big inning included Levi Montéro, Hayden Hensley, Adrían Muñoz, and Seth Gingrich, who all drove in runs. Yazael Nuñez, 4-1 for the season, was the winning pitcher. He went six innings, allowing 1 run on 4 hits, striking out 8 and walking 1. The Longhorns piled up 17 hits in the game. Muñoz, Montéro, Gingrich, Hensley, and Nuñez each had multiple hits for the Longhorns. Montéro and Muñoz both had 3 hits to lead Lennard. The Longhorns didn’t commit a single error in the field, and Montéro threw out 2 would-be base stealers.

After scoring 11 in the Riverview loss and 12 in the Braden River win, Lennard locked it up against a good Strawberry Crest team, 10-7 overall and 2-1 in District 4, with a hot Saturday morning pitchers’ duel. A 2-out, come-from-behind 3-run home run by big Edward Tarrant proved to be the difference for the Horns.

Both teams were strong on the mound. Lennard pitchers allowed just 5 hits to Strawberry Crest. Senior Tyler John started for the Horns. He surrendered 1 run on 0 hits over two innings, striking out 2 and walking 1.

Strawberry Crest opened up the scoring in the second inning, when Joseph Parrillo grounded out, scoring 1 run.

Randy Tavarez,1-0, was the winning pitcher for Lennard. He allowed 1 hit and 1 run over one inning, with 0 walks. Cameron Lassalle threw four tough innings in relief out of the bullpen. Lassalle recorded the last 12 outs to earn the save for Lennard.

Working four innings and striking out 9, Chargers, starting pitcher Brent May proved troublesome for the Longhorns’ hitters early on, but the junior righty ran into some trouble with 2 outs in the third, walking lead-off man Alek Mangual and hitting Yazael Nunez. Then came the play of the game: May made a big mistake with a hanging curve to senior Tarrant, who smashed a home run over the left field fence.

“He threw a lot of sliders to me in my first at-bat, so I figured he’d do the same thing,” Tarrant said. “I wanted to adjust, look for that, and he hung one. I just didn’t miss.”

That, thanks to great pitching, was all the offense the Horns needed. Levi Montéro went 2-for-3 at the plate to lead Lennard in hits.

District 9 doormats Brandon, 1-5 and 4-11 overall, and Tampa Bay Tech, 2-4 and 3-14 overall, furnish the opposition this week. Lennard goes to Brandon April 16, and then TBT visits Lennard for an April 18 game. Two more non-district home games, Durant on April 23 and powerful Plant City on April 25, end the home season before the Horns play two non-district games on the road.