In some of these new-fangled, large baseball parks in the major leagues, it takes almost as long to walk from the bullpen to the mound as it does to drive from Potomac, MD, to Washington, DC.

That is of little interest to anyone except one young man from Ruskin, struggling to make it to the big show. Already the first, and probably only, Lennard High School grad to sign a professional sports contract, Jackson Tetreault (te-tro), 22, hopes one day to be the first former Longhorn to make it to the Major League Baseball (MLB) level. 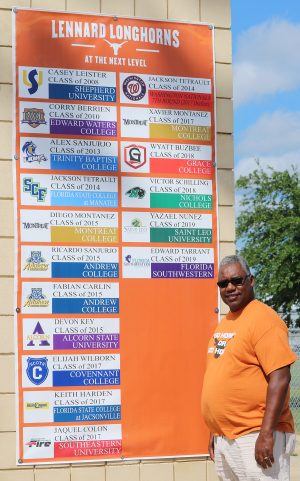 Tetreault, long and lanky, is oh so close to his dream of pitching from a major league mound. If he can maintain his progress in the Washington Nationals minor league farm system, Tetreault may make it to DC this season or next or even the next, for that proverbial cup of coffee or, perhaps, more if he can prove that he can get hitters out consistently and maintain a healthy, sound arm. Of course, there is always the chance another MLB team could pick him up if the Nationals do not promote him. Right now Tetreault is in his third minor league season, assigned by the Nationals to their A advanced team in nearby Potomac. The Nats, over the previous off-season, ended a 10-year working relationship with the AAA Syracuse Chiefs, where they had been affiliated for ten years, and re-located their top level minor league affiliation to Fresno, CA, which is a 2,800 mile one-way trip to Washington. Between AAA Fresno and Washington, the Nats have an AA farm team, the Harrisburg Senators, in the Pennsylvania capital, about a 120 mile drive north from Washington.

Now 6 feet 5 inches and 190 pounds, Tetreault was always a tall kid for his age, and he had a live, great arm, often playing catcher, as well as pitcher. He started playing organized youth baseball at the age of 7 in the East Bay Little League system, where his father, Curt Tetreault, a Tampa Bay area tennis pro, was one of his coaches. To this day, Tetreault credits his dad for being his “best coach,” inculcating into Jackson’s footwork, windup, delivery, and folllow through some of the same techniques a tennis player uses in a serve. In fact, Tetreault also competed at Lennard as the Longhorns #1 tennis player his sophomore and junior years.

When Tetreault was in the ninth grade on Lennard’s varsity baseball team, he was used only sparingly at pitcher. This confinement to the bench discouraged Tetreault, who sat out baseball his sophomore and junior years. He returned to the diamond his senior year, posting an eye-opening 1.62 ERA (earned run average) on his way to being one of the top pitching prospects in Florida as the Longhorns’ Pitcher of the Year under Lennard coach Kennedy Duran.

Professional scouts and major college scouts were leery of his skinny size, so Tetreault took his beanpole physique way out to Oklahoma to play at tiny Cameron State University, an NCAA Division 2 college, where he posted a 4-2 record in the 2016 season. By the next baseball season, Tetreault had returned to the Tampa Bay area and enrolled at State College of Florida in Bradenton, where he posted a 4-6 mark in Spring 2017. That JUCO season caught the attention of the pro scouts when Tetreault posted a 2.58 ERA with 108 strikeouts over 80 innings.

Tetreault’s stellar stats and demeanor resulted in his being selected 223rd overall in the amateur draft on June 20, 2017, just days after the righty, throwing and batting, turned 21. Tetreault did not become a millionaire overnight like some of the bonus babies, but a pro contract from the Washington Nationals, accompanied by a check for $300,000, was not exactly chopped liver. Since then Tetreault’s journey of bus rides and performance through the low to mid minor leagues has been steady, if not spectacular. Overall, entering this season and mainly used as a starter, he has logged 220 innings, yielded 206 hits, struck out 224 batters and walked only 73. His repertoire includes a low to mid-90s fastball, a curve, a slider, a sinker, and a change-up. Speaking from Potomac after he won his first outing earlier this season,Tetreault said, like all minor leaguers in the Nationals farm system, he is on a pitch count of about 80 per game which will get stretched out a bit as the season moves on. He does not have an overpowering fastball but depends on command (control) and movement (on his pitches) to stifle the offensive attack of opposing teams.

Instead of coming back to Ruskin to spend the past winter at home, Tetreault opted to live in West Palm Beach, home of the Nationals spring training camp. He worked on the physical and mental parts of his pitching, especially the Nationals’ credo of “pitching inside” and “going right after the hitter.” Tetreault said he also received some encouraging words from Nationals three-time Cy Young winner and pitching star Max Scherzer.

The 2019 season opened auspiciously for Tetreault and the Potomac Nationals earlier this month, as he went 5 innings, giving up 1 run on 5 hits, striking out 5 and walking 1. His second start on the mound was last weekend against Winston-Salem, where he was also the winning pitcher, toiling five innings and giving up only one run on 4 hits. His next foray to the mound is expected sometime this week. For now, only 15 miles and 20 minutes, along with some more sparkling stats, separate Tetreault from the parent Nationals.

One baseball magazine remarked earlier this spring that Tetreault is number six among the top 10 Washington minor league prospects. As for making it to the big club, the magazine said, “Tetreault has a puncher’s chance. Don’t forget his name. There’s a chance Tetreault develops into a low-end #3 or good #4-type arm in a big league rotation.”

As that sage baseball general manager, Branch Rickey, the man who brought us Jackie Robinson, once said, “A major league player is merely a minor leaguer with the chance to play in the bigs.”