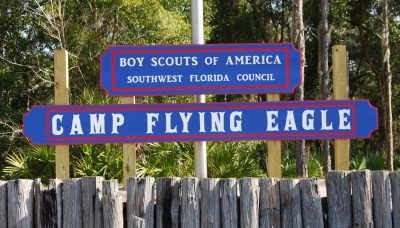 CARL MARIO NUDI PHOTOS
Camp Flying Eagle, located off Upper Manatee River Road, was opened in 1929 and has been used by the Boys Scouts continuously since then.

The Southwest Florida Council of the Boy Scouts of America celebrated the 90th anniversary of Camp Flying Eagle in Manatee County on Saturday, Feb. 2, with a Camporee for scouts and a day filled with activities for the public.

“It’s one of the oldest Boy Scout camps in Florida and the United States,” said Randi Greene, chair of the anniversary celebration organizing committee. “It opened in 1929.”

Visitors to the 185-acre camp watched the 400- to 500 scouts participate in various activities, including the building of gateway structures constructed of timbers.

The gateways, which are used as welcoming entrances to their campsites, were judged, and awards were presented.

One of the main events was the Siege of Mafeking catapult competition. 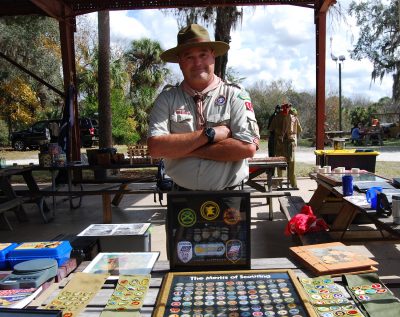 Ariel Ruiz, who has been involved with scouting since he was a scout as a boy, has been collecting scouting patches and memorabilia for 37 years. He brought some of his collection for display at the 90th Anniversary celebration of Camp Flying Eagle.

Each scouting unit designed and built a catapult to launch water balloons at a group of scout leaders in the middle of a field.

The scouts were busy throughout the weekend with all the activities the camp has to offer.

Greene, whose husband, Todd Sr., is the camp ranger, said the anniversary weekend was special, but Camp Flying Eagle usually is a very busy place.

“Thousands of scouts from all over Florida use the camp all year around,” she said, “but most of the scouts are from the Southwest Florida Council.”

The camp has a rifle and skeet ranges, an archery range, half-Olympic-size swimming pool, hiking trails, a climbing wall, canoeing and several areas where special activities can be held.

The Manatee and Two River districts of the Southwest Florida Council were holding their Camporee during the anniversary weekend.

“They learn a lot of life skills at Camp Flying Eagle,” said Randi, who has been involved with Scouting for 24 years. “That’s what Boy Scouts is all about — a game with a purpose.”

While using the campgrounds, the scouts practice and improve their camping skills and work on their merit badges. 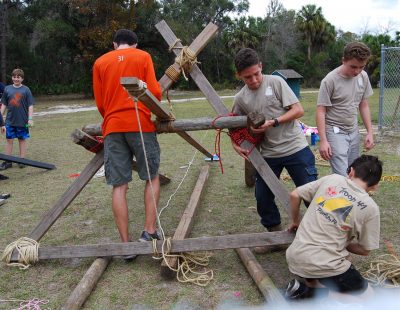 Scouts David Lester, 16, left, Tyler Brenelle, 14, Colin Butzow, 15, and Tony Genereau, 14, of Troop 41 in Parrish, built a catapult for the Siege of Mafeking competition at the Camporee and 90th Anniversary celebration of Camp Flying Eagle.

The merit badges are earned when a scout achieves a level of competency in a specific field, such as sports, crafts, science, business, or trades. There are more than 135 types of merit badges.

A certain number of different kinds of merit badge are needed for a scout to advance to the next rank.

The ranks are Scout, Tenderfoot, Second Class and First Class. The highest rank in scouting is Eagle Scout.

“We teach them skills at the troop meetings, but they come out here to learn it,” Thielen said. “They learn without knowing they are learning.”

Along with skills, he said scouts learn leadership, teamwork and character development.

“We give them what they need to become community leaders,” Thielen said.

The visiting public on Saturday not only got to see the scouts in action at Camp Flying Eagle, but they were able to learn the history of the camp.

Local historian, B.J. “Red Dog” Maynard, gave a two-hour tour of the camp, relating stories he gathered while researching for his book, A Century of Scouting: The History of Boy Scouting in Manatee County.

Maynard moved to Manatee County in 1995, retiring as a colonel after serving 37 years in the United States Army. 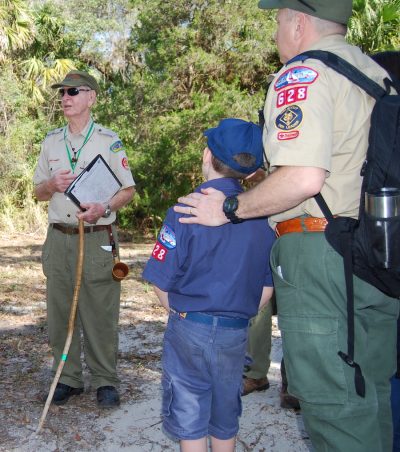 B.J. “Red Dog” Maynard, who wrote a book on the history of Scouting in Manatee County, conducted a historic tour of Camp Flying Eagle for visitors during the 90th anniversary celebration of the campgrounds.

He became involved with scouting as an adult when his oldest son joined.

On the tour, Maynard showed the visitors the first building constructed at the camp after it was purchased in 1929 for $2,000.

“Before that the scouts had to find farmers or ranchers who would let the them use their property for camping,” he said.

The first building, used as a mess hall, was constructed in April 1929. The construction of four cabins followed shortly.

Because the property was in an isolated rural area and the condition of the roads were poor at the time, all the material to build and supply the workers and scouts were barged up the Manatee River, which runs through the property.

This required the construction of a dock, the first structure to be built.

The Boy Scouts of America was founded in 1910, and the first Boy Scout troop was formed in Manatee County shortly afterwards.

In 1926 there were 13 troops, seven in Manatee County and six in Sarasota County, which made up the Sunnyland Council.

The Sunnyland Council was merged in January 1995 with the Southwest Florida Council, which includes the gulf coast counties from Collier to Manatee.

Electricity was brought to the camp in 1947.

The Kiwanis and Rotary clubs were very supportive of the Boy Scouts in Manatee County and provided funds to build cabins, which held one leader and seven scouts, Maynard said. 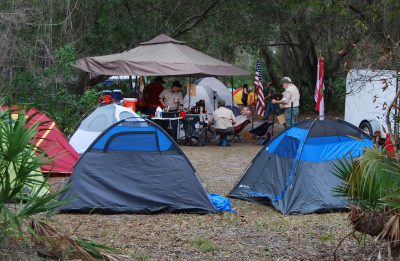 Scouts camped over the weekend at Camp Flying Eagle during a Camporee and 90th anniversary celebration of the campgrounds.

“The Boy Scouts is a wonderful organization, you can see that by what they’re doing today,” he said, referring to all the activities going on around the camp.

Another big attraction for visitors was the display of scouting memorabilia.

Ariel Ruiz, an adult leader with Troop 111 at the First Presbyterian Church in downtown Bradenton, brought a portion of his personal collection of badges, books, pamphlets, posters, camping equipment and scouting-related items for visitors to see.

On display was about 20 percent of the around 9,000 items Ruiz has collected over the 36 years he has been in scouting.

“I started by collecting merit badges,” said Ruiz, who was born in the United States but moved to Argentina with his family as a young boy.

He was a scout in Argentina

In 2006, when Ruiz came back to the United States he was married with four children.

He has more than 7,000 merit badges and patches reflecting special scout events and locations in his collection. 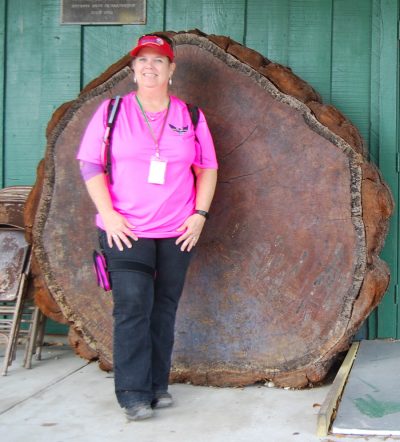 Randi Greene, chair of the Camp Flying Eagle 90th Anniversary celebration organizing committee, has been involved in scouting with her husband, Todd Sr., the camp ranger, and their two sons, Todd Jr. and Michael, for 24 years.

Scouting has been part of the lives of many Manatee County leaders.

One of those prominent people is Circuit Court Judge Gilbert Smith Jr.

“I first joined Troop 54, then Troop 22 (at Palma Sola Presbyterian Church),” Smith said. “I’ve been going to Camp Flying Eagle since I was 11 years old.”

He became an Eagle Scout in 1969 when he was 17 years old, and was an Explorer Scout while in college.

“I became a scoutmaster in my 20s,” Smith said.

He took a break from scouting in his 30s as he was establishing his law practice.

“But when I got elected as a judge (in 2008), I got more involved,” Smith said. “Community service is a very important part of a judge’s work,

“One thing a judge can do is volunteering as an example for the community.”

Smith served as Chairman of Manatee District of the Scout Council for seven years, starting in 2009.

“It’s all about the scouts,” the circuit judge said.

He said parents are very important in making scouting successful.

“At the event Saturday there were 400-500 scouts and another 200 adults,” Smith said. “That’s why it works so well, and the scouting experience is effective.

“I think what’s sad is so many kids are not in a program where they can learn the principles of good citizenship as in the scouts,” he said. “Scouting would keep them busy in the years that they can be distracted.” 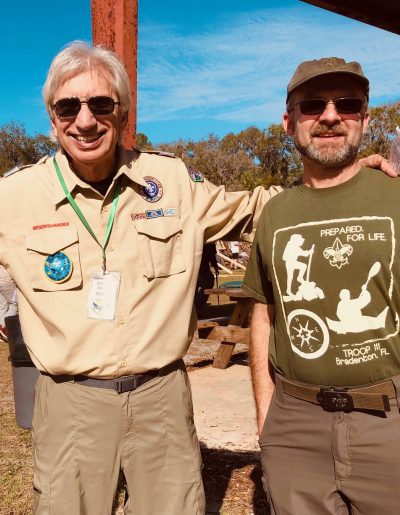 Smith was also involved with the Girl Scouts when his daughter, Shannon, was a member.

“Girl Scouts has a good purpose and (the organization) has done a good job,” he said.

Last Friday, Feb. 1, the Boy Scouts began officially accepting girls into the scout program, but Smith noted that girls have been involved with Boy Scouts for around 20 years in the Venturing program.

“I think both organizations, Boy Scouts and Girl Scouts, will succeed,” he said.

Hannah Townsend, 13, from Troop 2019, a First Presbyterian Church- sponsored troop, said there are 10 girls in the troop.

“I joined scouts because my family has been involved with the organization for a while, with my brother, my father, who is a scoutmaster, and my two sisters, who are with Venturing Scouts,” she said.

For more information about scouting in Manatee County, visit the www.manateerambler.com website.

To learn more about the Southwest Florida Council, go to its website at www.swflcouncilbsa.org.

And for information on the Boy Scouts of America, check out its website at www.scouting.org. 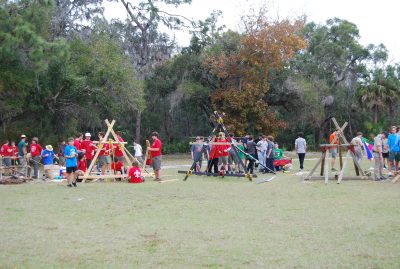 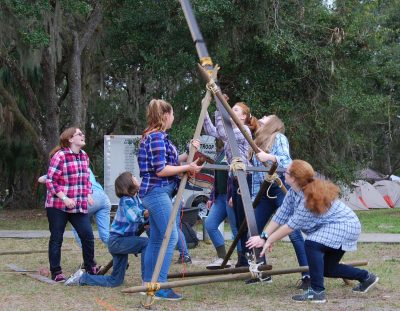 Troop 2019, the first all-girl unit of scouts in Manatee County, participated in the Siege of Mafeking catapult completion at the Camporee and 90th Anniversary celebration of Camp Flying Eagle. 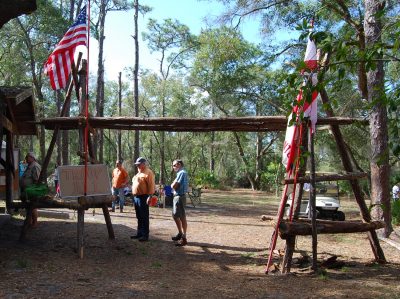 Each scouting troop builds gateways to their camp sites during the Camporee at Camp Flying Eagle.