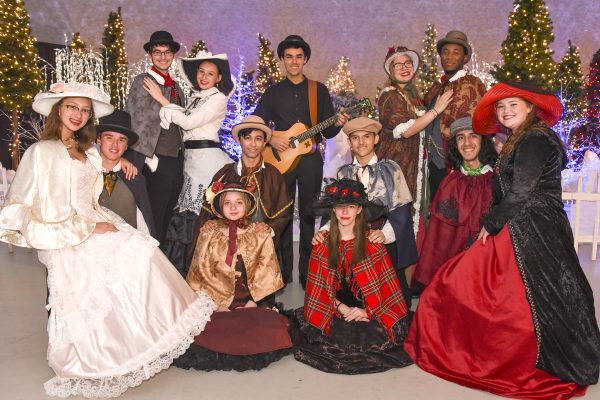 Tis the season for Christmas concerts and few singers will put in more time spreading the cheer this month than the singers from Riverview High School’s Choral Department, performing 20 public and private concerts. The school is also debuting a new Victorian Choir ensemble, performing songs that Charles Dickens might have heard.

And they will be doing all of this while carrying a full load of studies at high school.

“I see this as an opportunity for my students to get performance experience and serve the community because we are going to be performing for a lot of elderly groups (including Kings Point, Prince of Peace Catholic Church and Freedom Fairways Golf Course) to take Christmas to people who otherwise could not experience the show,” said Liz Bennett Stewart, director of the Riverview High School Chorus Department. “What we get back (from the shows) is far more than what we give.”

New this year is the Victorian Christmas Carol group, a new feature for the Riverview Chorus Department. Completely kitted out in authentic Victorian-era clothing the 12-person choir of six boys and six girls will perform songs from the late 1800s. Freedom Fairways Golf Course covered the cost of the elaborate costumes, a project taken on by Amy Burch, a choir mom. “She took on the project of costuming the kids, and their costumes are beautiful and authentic,” said Stewart.

The project is personal for Stewart. The youngest of four siblings, she lost a sister, dad and two brothers. Her mother died in 2013.

“So initially I made myself very busy around Christmas. I suppose it was a coping mechanism at the beginning and I chose (to help) older people because I could relate to the loneliness and sense of loss that is sometimes associated with the holidays.”

The Christmas concerts have grown over the years with young singers learning to perform as a team in different venues but also “learning that the music we perform is very meaningful for (our audiences).”

One of those annual performances at Rice Creek RV Park in Riverview has become known as the “Cookie Show” for the choirs. Seniors bake cookies for two days before the concert, and students spend hours after the show chatting with residents and sharing the treats. “We do a lot of work within the four walls of my classroom but when we bring it out into the community and it becomes more meaningful for my kids, beyond just singing and doing choreography, it’s about the spirit of Christmas.”