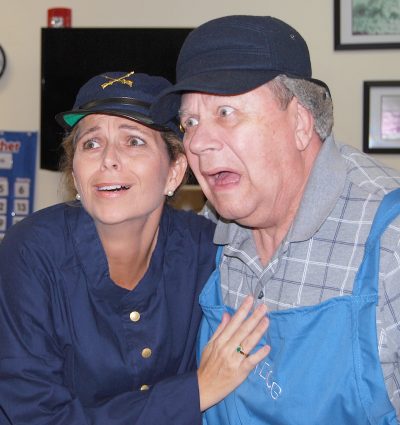 Dawn Reif, as Mrs. Davidson, and Phil Montgomery, as Raynerd, demonstrate their facial emotion abilities during a dress rehearsal in October for the Parrish Playworks’ production of Southern Hospitality.

Thousands of families will be moving to the Parrish area in the next few years with all the subdivisions planned or already under construction.

Several longtime residents want to make sure the newcomers know that Parrish is a community with a rich history and want their new neighbors to appreciate it as much as they do.

Parrish resident Karen Romant, president of the Parrish Playworks, is doing her part with the theatre company’s upcoming production of Southern Hospitality, to be held from Nov. 4 through Nov. 11, with four performances at 7 p.m. Friday and Saturday, and 2:30 p.m. Saturday and Sunday, at the Hidden Acres Barn, 6004 77th St. E., Palmetto.

“My first reason for picking this play is because it’s incredibly funny,” Romant said recently while her cast was rehearsing at the Parrish YMCA in the Historic Parrish Schoolhouse.

“The other reason is that Parrish has a rich history, and the play has a lot of parallels,” she said.

“The pioneer families that came and settled here to make it their home faced a lot of hard times,” said Romant, who also is directing the play.

They had to carve their homes out of a harsh environment of swamps and saw palmetto, she said.

Romant said Southern Hospitality is similar to what has been happening in Parrish because it is about a small town that is losing its identity. 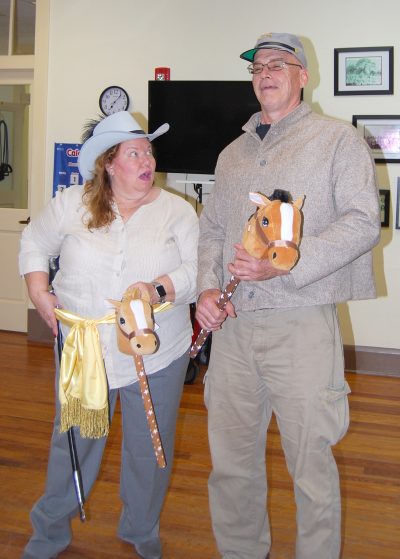 Deborah Davidson, as Geneva, and Randall Reif, as John Curtis, practice their lines for the Civil War Reenactment scene during a dress rehearsal in October for the Parrish Playworks’ production of Southern Hospitality.

The play, written by Jessie Jones, Nicholas Hope, and Jamie Wooten, is a comedy about the four Futrelle sisters who live in the town of Fayro, Texas.

Because the rendering plant and Super SmartMart, two of the largest employers in the town, were closing, residents are leaving to find other opportunities.

“The people of the town in this play decide they have to do something if they want to save their town,” Romant said.

The sisters concoct a plan to lure a salsa manufacturer to town by holding a Fayro Days festival.

What follows are a series of mishaps and unfortunate incidents that keep the audience laughing.

The play also has special meaning for Parrish resident, Mandy Kersey, who plays the part of Honey Raye, one of the Futrelle sisters.

“We want to bring people to Parrish,” said Kersey, who has lived in Parrish since 2000 and whose family roots in Florida go back generations, “but we want to keep its soul alive.”

This play was Kersey’s second Parrish Playworks production in which she has acted.

She was in the last production of the Murder Mystery Dinner Train at the Florida Railroad Museum in Parrish.

“That was a lot of fun, and Karen does such a great job,” said Kersey, a language arts teacher at Buffalo Creek Middle School. “She’s very patient with newbies, so I auditioned for this play.”

It was at Kersey’s insistence that Keith Kessler, a sixth-grade history teacher at Buffalo Creek Middle School, that he try out for a part in Southern Hospitality.

“I was helping out with the drama club production at school, and she recruited me,” said Kessler, who plays the part of Dub Dubberly, the husband of Frankie, one of the Futrelle sisters.

“The character is very true to life,” said the 12-year resident of Ellenton. “He’s going through a midlife crisis.

“I can relate to that,” Kessler said with a smile.

“He’s picked on by all the women in his life,” he said, “and I can relate to that.

“So (playing this part is) not too much of a stretch for me,” said the actor, whose part has plenty of humorous lines.

“Because it’s a farce, the character’s emotions go up and down,” Kessler said.

Although he has never acted in a play before, he said his teaching experience was a big help.

“Teaching is its own kind of performance,” Kessler said. “You can’t do either if you’re nervous about speaking in front of people.”

For Palmetto resident, Dawn Reif, being part of the production was “a great way to give back to the community.”

Reif, a social worker, plays D. Dayva Davidson, a visitor to Fayro who the sisters are trying to impress with their southern hospitality. 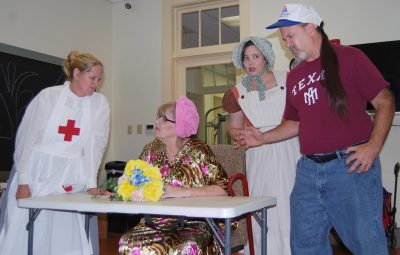 Jill Goldsmith, as Rhonda Lynn; Catherine Brown Carter, as Iney, “the meanest person in the world” Jennifer Butler, as Frankie; and Keith Kessler, as Dub, practice, their lines for a breakfast scene during a dress rehearsal in October for the Parrish Playworks’ production of Southern Hospitality.

“I acted when I was in the Air Force and stationed in Germany,” she said. “I’m getting back into it, and it’s a lot of fun.”

Reif, who is married to another actor in the play, Randall Reif, was also in the last Playworks production of the Murder Mystery Dinner Train.

Randall tried out for his part as Deputy Sheriff John Curtis because he thought it would be something fun do with his wife.

“I’m enjoying myself,” said Randall, who also is an Air Force veteran.

“This is a lot easier than work,” he said. “(As a paramedic) I’m under a lot of pressure at work.”

There are 13 cast members and 12 behind-the-scenes volunteers working on this production, all under Romant’s direction.

She helped found Parrish Playworks in 2014 shortly after her friend, Claudia Hartung, asked her to help collect and write stories about Parrish pioneer families.

The stories about Parrish families they collected evolved into a play called Red Rooster Tales: The Train to Yesterday, a musical, folk-life play first previewed in 2013 at the Parrish YMCA.

According to its web site, “Parrish Playworks produces shows that tell stories based on our local cultural heritage and feature local talent.”

This was what Gretchen Fowler, president of the Parrish Civic Association, finds important about the current Parrish Playworks production of Southern Hospitality.

“There are a lot of similarities with the play (and Parrish),” Fowler said. “We got (sic) all these investors and developers coming in and changing it for their benefit, and that’s not right.”

She said one developer held a meeting in the Copperstone neighborhood to convince the community to support his efforts to change the name of Moccasin Wallow Road. 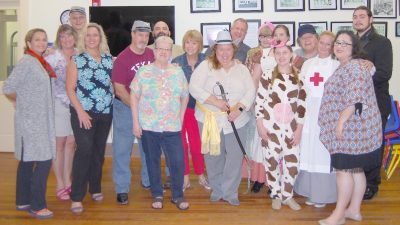 “Moccasin Wallow is difficult for his marketing program,” Fowler said. “He calls it Snake Road,̛ and snakes are not a good image for marketing.”

The developer wanted the road to have a name similar to his new subdivision, Fowler said.

She said if the people wanted to change the name of Moccasin Wallow, she would support changing it to Parrish Parkway.

“I said ̔they’re trying to make Parrish into Lakewood Ranch North,̛” said Fowler, who moved to Parrish in 2009. “I came from a town in California where the same thing happened.”

It was under Fowler’s leadership that the Parrish Civic Association got the Manatee County School Board to reconsider renaming the new high school under construction in Parrish.

Last year the school board picked the name North River High School, but after a Parrish Civic Association lobbying effort, they voted in August to go through the renaming process.

The school board will vote on a new name for the high school at a public hearing on Feb. 26, and the civic group is promoting the name Parrish High School.

The school is scheduled to open in August 2019.

For more information on the Parrish Playworks and for tickets to the production of Southern Hospitality, visit their website at www.parrishplayworks.org.

To learn more about the Parrish Civic Association and the work it is doing to preserve the Village of Parrish heritage, visit its web site at www.parrishcivicassociation.com.

The School District of Manatee County has more information on the renaming of the high school in Parrish at its website, www.manateeschools.net.